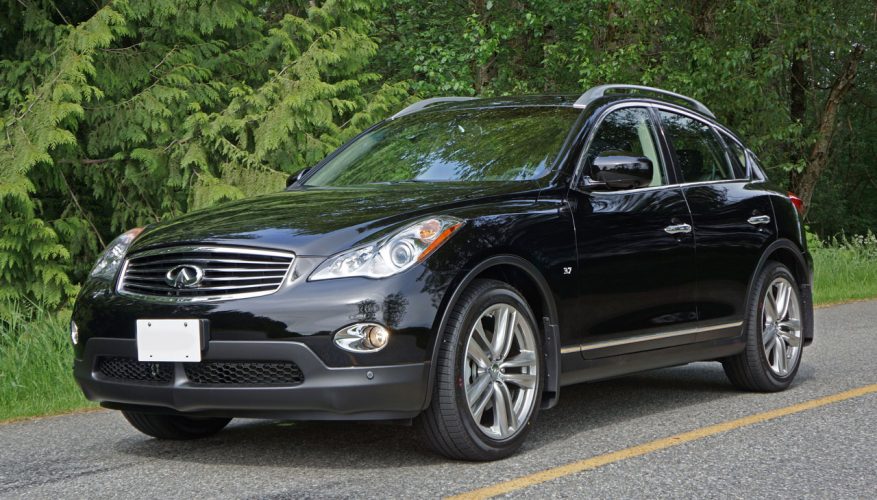 By: Trevor Hofmann
If you had to ask me which compact crossover SUV is sportiest, I’d need to put Infiniti’s QX50 near the top of my list. It’s not only one of the sleekest five-door CUVs in the luxury sector; it’s also an impressive driving machine.

The QX50 was first introduced as the EX35 in 2007 as a 2008 model, and hasn’t changed stylistically since inception. Just the same Infiniti has steadily updated its smallest crossover each year, with the biggest improvements coming in model year 2011 when a new seven-speed automatic transmission replaced the old five-speed unit, and in 2013 when Infiniti replaced the 3.5-litre V6 with a more powerful 3.7-litre unit, and commensurately changed the model’s name to EX37.

Its new QX50 designation is the result of a brand-wide renaming system that sees all car monikers start with Q and all crossovers and SUVs begin with QX, a formula that goes way back to the brand’s initial model and first SUV, the flagship Q45 full-size luxury sedan introduced in 1989 and the Nissan Pathfinder-based QX4 SUV having come along in 1997. More recently Infiniti used the alpha portion of that model’s name for its full-size off-road capable QX56, now known as the QX80. It’s the flagship of its SUV line, so a fitting designation for Infiniti’s smaller crossovers.

The QX50 is Infiniti’s smallest, a compact model that inches up towards mid-size. This is a theme that Infiniti has long played, its compact G, now renamed Q50, larger than most of its premium peers. The same tact gets played out in performance, the QX50 crossover getting one of the most powerful engines available in its segment as standard equipment. Where competitors start you off with a small four-cylinder, Infiniti puts you right into a 325 horsepower 3.7-litre V6 with 267 lb-ft of very motivational torque right from the get-go, which is likely how many premium buyers want to experience their luxury rides anyway, despite our current high gas prices.

To say the QX50 is quick is an understatement. It shoots off the line with shocking response to input, the all-wheel driven 245/45R19s on my Premium-trimmed tester gripping tar without even a hint of tire squeal while the standard seven-speed gearbox seamlessly swaps gears with speedy precision, even rev-matching the engine on downshifts. Infiniti doesn’t offer paddle shifters, which I found a bit strange in such a sporty crossover, but having said this there’s no need to remind myself of how rarely I use them on a day-to-day basis when driving a vehicle so equipped.

Just like the new Q50 sedan, the old G was a brilliant driver’s car with deft handling and sublime highway cruising capability, and I mention this only because the QX50 rides on that car’s platform architecture, resulting in the inherently sporty nature mentioned earlier. While not as taut as the new Q50, the QX is nevertheless a blast to throw through corners, responding with neutral behaviour even when pitched into tight curves admittedly too quickly, yet its ride pampers with ample compliance so as not to upset passengers.

Practicalities in mind, the QX50 offers plenty of room for the driver and front passenger, while rear occupants should also enjoy spacious comfort as long as they’re not large adults seated three abreast. My five-foot-eight medium-build body felt right at home in back, and the seats are almost as comfortable as the multi-adjustable chairs up front. All come covered in leather, while the rest of the cabin gets the type of attention to detail normally found in much more expensive ultra-luxury marques.

As expected in this class, the majority of surfaces are soft-touch, while Infiniti goes further by adding planks of real maple in a gorgeous high-gloss finish, chrome and brushed metal accents, and very high-quality switchgear. Additional standard features include an auto-dimming rearview mirror, dual-zone automatic climate control, an eight-way powered driver’s seat and four-way powered front passenger seat, both with heatable cushions, plus a leather-wrapped shift knob, a leather-wrapped powered tilt and telescopic steering wheel with cruise and audio buttons, the latter connecting through to a six-speaker AM/FM/CD/MP3 audio system with auxiliary and USB inputs plus satellite radio. A powered glass sunroof also comes standard, as does Bluetooth phone connectivity, a trip computer, a seven-inch infotainment system, RearView backup monitor, driver selectable performance settings including Snow mode, Infiniti Personal Assistant concierge service, and all the usual luxury vehicle fare. Unusual in competitors yet an Infiniti hallmark is a beautiful analog clock at dash central.

Now here’s the best part, along with the name change the 2014 QX50 received a price reduction of $5,900 compared to last year’s model, by including all the Journey trim’s features as standard and then dropping the price to $37,900 plus $1,995 for freight and pre-delivery prep. At the time of writing the brand’s website is already advertising the exact same vehicle in 2015 specification and an even lower price of $34,950, so I’m guessing you can get a pretty sweet deal on a 2014.