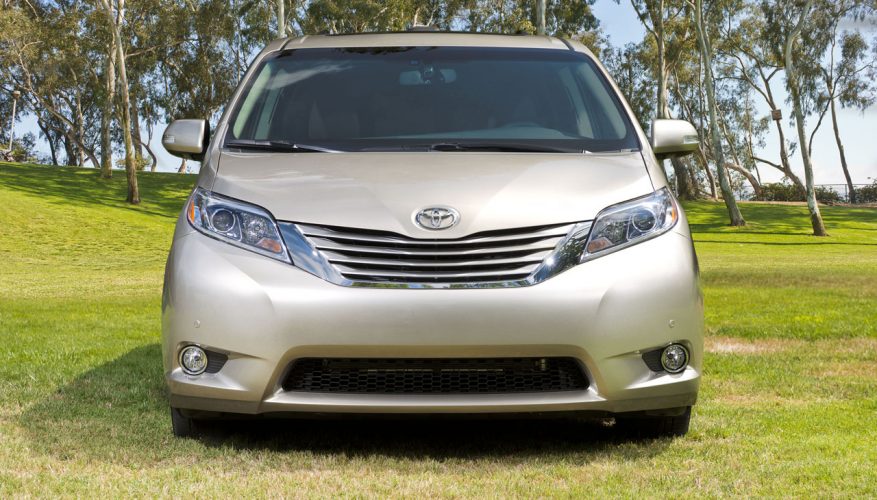 By: Trevor Hofmann
Arguably the best-looking minivan available, especially in sporty SE trim, Toyota found street cred with its third-generation 2011 Sienna when introduced in 2010. Now, four years later, it gets a mid-cycle upgrade for the 2015 model year.

The old adage “if it ain’t broke don’t fix it” certainly applies to the Japanese brand’s refreshed minivan, at least on the outside. Exterior styling enhancements are limited to a new headlamp cluster design, optionally infused with a thin strip of de rigueur LED running lights, as well as fashionably late mirror housing-integrated turn signals on top-tier trims, and newly designed taillight lenses.

“The Toyota Sienna is a minivan like no other – delivering all the practicality that busy Canadians want, plus great styling and the surprisingly dynamic performance that drivers love,” said Larry Hutchinson, Vice President at Toyota Canada Inc. “For 2015, the Sienna is more inviting and fun – with an even more upscale interior, better handling, additional safety and convenience features, and more innovative technology as standard. Always a favourite, the Sienna is ready to prove, yet again, why it’s the perfect minivan for families on the go.”

Of course, it’s what’s on the inside that counts, right? Such has always been the case with family-friendly minivans, which is why Toyota has devoted most of its efforts to the 2015 Sienna’s cabin. The new van’s instrument panel has been totally reworked, the upside-down Nike swoosh (or rather right-side up Puma swoosh) now eliminated to make way for a more conventional and arguably more appealing overall design. Toyota has visually combined the primary gauges with the centre stack by stretching an rich looking padded and stitched gauge cover halfway across the dash and then surfacing both areas underneath in the same matte black, before applying a new steering wheel ahead of a classic two-dial speedo and tachometer duo that bookends an available 4.2-inch colour multi-information display which can show turn-by-turn directions and more. A new standard centre console-mounted 6.1-inch display audio system integrates a standard reverse camera, upgraded to a wide-angle panoramic view on XLE and Limited trims, while an optional seven-inch infotainment touchscreen display with capacitive switches that allow the driver and front passenger to swipe items “on” and “off” the screen gets added to higher trims. Below these, a revised HVAC interface sits beside the gearshift lever, once again equipped with manual mode, while reshaped chrome trimmed air vents and other trim details combine for a look that’s decidedly more upscale than the outgoing model. It won’t only look more high-end, but Toyota promises it will feel better too, with more soft-touch materials.

New features for 2015 include Driver Easy Speak, which places a built-in microphone near the driver for rear speaker-projected parental commands. No doubt the kids will be sighing the 10th time dad says, “this is your captain speaking…” but the intercom-like tool will no doubt be easier on the vocal chords than yelling at the top of your lungs to get Johnny to stop hitting Susie. To keep an eye on those two before anything gets too far out of hand, Toyota will include a pull-down conversation mirror on all models.

Like the current Sienna, the new van will be available in both eight- and seven-occupant configurations, the latter including large captain’s chairs in the first and second rows, while Toyota will continue to offer its ottoman-enhanced second-row seats in top trim.

The new Sienna will be available in seven trim levels, including two class-exclusive all-wheel drive models as well as Mobility versions. The former all-wheel drive models get an on-demand AWD system that Toyota claims to deliver “superior driving confidence while maximizing fuel efficiency,” while both roll on runflat tires.

As mentioned by VP Larry Hutchinson in the above quote, the Sienna will deliver even better handling than the current model, which sets itself apart from most peers already, especially in its sportiest SE trim level. Unfortunately, the press release hasn’t elaborated on any underbody changes to this effect, therefore we’ll need to wait until more information is released before we can report on any suspension upgrades.