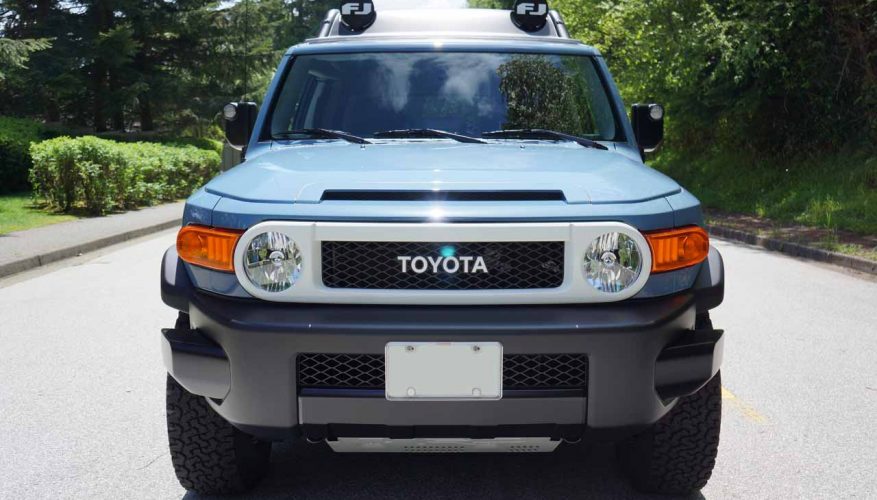 By: Trevor Hofmann
You can choose to weep in your pillow if you want to, or rather than lamenting the news that Toyota’s fabulous FJ Cruiser will soon only be available from the used car lot, you can choose to purchase a brand new 2014 model and revel in its exclusivity.

There’s something even more exclusive about the 2014 Toyota FJ Cruiser, incidentally, the availability of a unique version that Toyota unveiled to Canadians at the Vancouver International Auto Show, dubbed Trail Teams Special Edition. Most noticeable is the model’s Heritage Blue paint scheme, which is very un-heritage-like as its roof isn’t painted white like the original FJ40 and most FJ Cruisers that have come since. No matter as it looks great, adding a custom appearance that’s only enhanced by its black 16-inch TRD beadlock-style alloy rims on LT265/75R16 BF Goodrich All-Terrain T/A tires. The bumpers, mirror caps and door handles are a matching matte black, while the grille surround is painted in classic gloss white. The Special Edition is topped off with a set of black off-road roof lights with FJ caps, all integrated into a wind-deflecting air dam that keeps the roof rack quieter than it would otherwise be. Black off-road rock rails are added below each rocker panel, while unique Trail Teams badging is attached to the rear as well as inside on the dash.

Those familiar with the FJ know that the exterior paint finish carries over into the cabin for a cool retro look, although the Special Edition gets unique polished black shift and 4WD selector knobs to dress things up. The rest of the interior is standard FJ Cruiser fare, but that’s by no means spartan. A dual-DIN audio interface sits front and centre, featuring AM/FM/CD/MP3/WMA and satellite radio compatibility, while the usual aux and USB plugs make it easy to plug in your external device. If you’d rather listen to audio wirelessly, Bluetooth streaming audio is included too, as is Bluetooth phone connectivity. Most audio functions can be controlled via steering wheel controls, as can the FJ’s cruise function, while overhead there’s a premium-level auto-dimming rearview mirror with an integrated backup camera. Most everyone’s favourite FJ Cruiser feature is the trio of dash-top-mounted gauges displaying compass headings, the exterior temperature, and an inclinometer, the latter letting you know just how far the FJ can tilt sideways before tipping over.

Additionally, every FJ includes a rear differential lock, front and rear tow hooks, a rear step bumper and Toyota’s Star Safety System of safety features, such as ABS-enhanced four-wheel disc brakes with electronic brake force distribution and brake assist, traction and stability control, Smart Stop Technology, which automatically overrides power to the engine when the brake pedal is depressed, and all the usual airbags, resulting in top “Good” IIHS crash test ratings for moderate overlap front, side, head restraints and seats, plus an “Acceptable” rating for roof strength.

Like all FJ Cruisers, four-wheel drive is standard. Models with the manual gearbox get Toyota’s trusted part-time 4WD with a two-speed transfer case and an automatic disconnecting differential, while the SUV’s vehicle stability control and active traction control have been optimized for off-road use. Lastly, protector plates shield all vulnerable components. The only difference between manual-equipped FJs and those incorporating the automatic transmission is a full-time 4WD system.

If you haven’t yet driven an FJ Cruiser, you’re in for a treat. First off, this isn’t a regular old 4×4 with solid axles front and back. The FJ’s ride is much better than these beasts of burden could ever achieve, much thanks to an independent suspension featuring double wishbones, gas shocks, coil springs and a stabilizer bar up front, plus gas shocks, coil springs, and a stabilizer bar combined with a four-link lateral track bar setup in the rear. It makes off-roading more comfortable and improves high-speed handling too. This means that the FJ feels part luxury car part sport sedan when compared to traditional utes like the Jeep Wrangler, yet it can off-road with the best in the business. Its undercarriage is pulled from real Land Cruiser roots after all, shared with the Toyota Prado, a sport utility that’s revered on multiple continents for its 4×4 prowess. You can also find this platform under the 4Runner and Lexus GX 460, good company indeed.

The FJ’s tow rating is identical to the 4Runner’s at 2,268 kilos (5,000 lbs), as is its ground clearance at 245 millimeters (9.6 inches). Where the FJ’s shorter body comes into play is in approach and departure angles, the FJ capable of 34 degrees up front and 31 at the rear compared to the 4Runner’s 33- and 26-degree approach and departure angles.

The FJ uses the same 4.0-litre V6 as the 4Runner, but it’s slightly detuned to make 260 horsepower and 271 lb-ft of torque, the latter from just 4,400 rpm. It’s a tractable engine that’s nicely suited to both on- and off-road duties, although fuel economy isn’t its high point at a claimed 12.7 L/100km in the city, 9.5 on the highway and 11.3 combined with the six-speed manual, or 13.8 city, 10.3 highway and 12.2 combined with the five-speed automatic. I have long called for a diesel in this SUV, and with fuel prices as high as they currently are it would have been a welcome addition.

Where the FJ also comes up a bit short is in passenger and load carrying space, but of course this was planned, being that this model was designed to be 150 millimeters shorter than a 4Runner and ride on a 100-mm shorter wheelbase so that it could take to the hills more readily. Anyone who’s driven off-road knows that a shorter wheelbase means greater mobility off the beaten track, and all who opt for this type of 4×4 are prepared for a reduction in cargo volume and rear seat room. Compared to a 4Runner, which offers 1.3 cubic meters behind the second row and 2.5 behind the front row, the FJ only provides 0.79 m3 of rear cargo space before dropping the second row, which opens up 1.89 cubic meters. The luggage area is accessible via a large swinging door, necessary for holding up the full-size spare tire, but unlike some other SUVs with this type of tailgate it was designed with North American consumers in mind, allowing easy access when curbside.

Accessing the rear seats is easy too, providing the front door is open as well. It’s a clamshell affair on both sides, so even if you’re letting out a back passenger the person up front needs to open their door in order to open the rear door. A bit of a hassle, but you get used to it.

Pricing for the 2014 Toyota FJ Cruiser starts at $33,540 plus $1,690 for freight and pre-delivery prep, whereas this top-line Trail Teams Special Edition can be had for $41,925, the only option being the as tested automatic transmission, which pushes the price up to $43,165.

So stop sobbing FJ Cruiser fans, and take this final opportunity to own a brand new example of a 4×4 that might just become a modern-day classic like the legendary FJ40 that preceded it.
©(Copyright Canadian Auto Press)
Car Shopping Tools