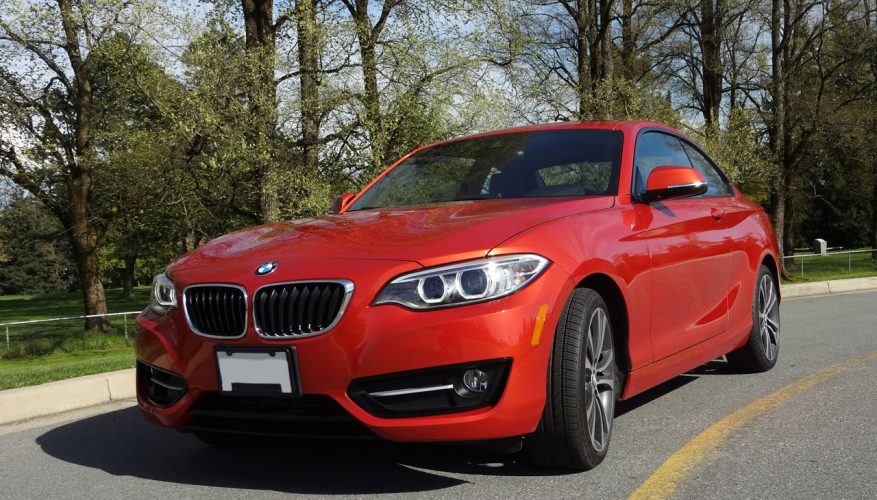 By: Simon Hill
There are many reasons to love BMW’s new 2 Series: For true driving enthusiasts it offers quicker, more nimble handling than the increasingly large 3 Series or its new 4 Series two-door offshoot. For the style-conscious, it offers genuine two-door coupe styling without sacrificing outward visibility or much in the way of practicality. For the budget-minded BMW shopper, it offers all the key touchstones of the BMW driving experience (and even the same engine, if you’re comparing the 228i to the 328i) at a significantly lower entry price ($36,000 for the base 228i versus $42,000 for the base 328i, not including destination fees). Finally, for those who just want a fun car, it delivers in spades without spoiling the party when it comes time to fuel up.

For those who haven’t been following BMW’s rapidly evolving model nomenclature, the 2 Series Coupe is the replacement for the 1 Series Coupe. From now on, 1 Series cars are slated to be small four- and five-door models (mostly only available in Europe, unless you count the X1), while the 2 Series will be small two-door models. This follows the same pattern as the iconic 3 Series, which split into four- and five-door 3 Series models and two-door 4 Series models (we’ll ignore the 4 Series Grand Coupe, since it just confuses matters).

The 2 Series is slightly larger than the outgoing 1 Series, but while the tendency for models to bulk up as they age is generally regrettable, in this case it’s actually a good thing: The 23 mm of additional length and 26 mm of extra width translate into small but useful gains in cabin and trunk space, bringing the 2 Series closer to the compact-but-usable size of the early 3 Series cars. In this sense, the 2 Series is really the model closest in spirit to the cars BMW became famous for.

Externally, the 2 Series borrows some styling cues from the 3 and 4 Series to present a somewhat more mature, aggressive look than the outgoing 1 Series. From a direct-side-on perspective it has a vaguely bubble-topped appearance, but from every other angle (especially head-on) it looks every inch the serious sports coupe.

Inside, the 2 Series is every bit as nice as its bigger BMW brothers. Soft-surface materials are used pretty much everywhere that matters, including the door uppers, with good-looking rigid plastics limited to the lower door panels, lower console and glove box lid. The slim A-pillars are cloth-wrapped, with rigid plastic covers on the B- and C-pillars. In my test car there was brushed metal trim to add a splash of visual interest (wood, aluminum and matte blue trim are alternative options), and all the switchgear was top-notch as expected.

I was impressed with the car’s outward visibility, which is excellent all around, including rearward. It’s refreshing proof that it is indeed possible to build a coupe you can see out of, and it earned the 2 Series instant forgiveness for its vaguely bubble-topped side profile. The back seats are admittedly tight, but much more usable than those in other sports coupes I’ve driven such as Scion’s FR-S, and the front seats make up for it with plenty of space to stretch out and excellent support when pushing the car through corners. In typical European fashion the padding is on the firm side, but even after a three-hour road trip I found things reasonably comfortable for my 5-foot-11 frame, and around town I had no complaints at all.

If there’s perhaps room for improvement inside it would be in the storage department, as there’s not a whole lot of cubby space in the 2 Series – the door pockets are divided up into small compartments, the console bin is shallow, and the lower cubby in the centre stack is good for pens and parking receipts only. The basics are taken care, however, thanks to couple of cupholders, while there’s 390 litres of space in the trunk for actual luggage and cargo, with 60/40 split-folding rear seatbacks if you need to extend your luggage space into the passenger compartment.

Ergonomically, the 228i is well sorted. All major controls fall easily to hand and are simple to decipher. BMW offers its puck-style iDrive controller as standard equipment in the 2 Series, and while the user interface does take a little getting used to (and sometimes requires a couple extra steps to get to the command you’re looking for) it is generally intuitive to use, so I was able to do everything I wanted without referring to the user manual and with only one or two short moments of hesitation. I’m still not 100 percent sure about the freestanding infotainment display, but the look is growing on me.

My only complaint on the ergonomics side is that I found the primary instruments to be mounted a little high for my taste in relation to the steering wheel, so by the time I had the seat adjusted to my preference the top of the gauges got cut off from view. I’m not sure if I just like to sit higher than most people or what, but it seems to be a peculiarly German issue, as I’ve the same problem with Volkswagens and Audis but haven’t generally encountered it in North American or Japanese brands.

On the road, the 228i feels lively and responsive. It actually weighs a little more than the 1 Series it replaces (1,479 kg for the 228i versus 1,450 kg for the 125i), but it has a light-on-its-feet feel. My test car was equipped with BMW’s Adaptive M Suspension, an $850 option that offers Normal, Sport and Sport+ modes. In Normal mode the ride strikes a very nice balance between sporty and comfortable, with the chassis feeling buttoned-down and composed, but not harsh or jarring. Sport mode tightens things up noticeably, making the 228i feel eager and lively. Sport+ mode relaxes the traction control (it puts it into dynamic mode), allowing you to take advantage of the car’s nicely balanced chassis with a little bit of throttle steering. The electrically assisted power steering is a bit numb compared to the hydraulic systems on BMWs of yore, but it is precise and nicely weighted.

The 2.0-litre turbocharged four-cylinder engine cranks out 240 horsepower and 255 lb-ft of torque, which I found to be plenty enough power to be fun but not so much that you can’t find the bottom of the throttle on public roads (if you want more than that, there’s always the 322-horsepower M235i). The six-speed manual gearbox in my test car offered crisp, confident shifts and the self-adjusting clutch had good pedal feel, making it a breeze to find the friction point when launching and shifting. It may be true that fewer and fewer people are purchasing manual transmissions these days, but BMW still knows how to build them right for those who do.

Acceleration from 0-100 km/h takes a brisk 5.9 seconds in the manual-equipped 228i (and 5.7 seconds with the sophisticated eight-speed automatic), whereas city/highway fuel economy is rated at 9.1 / 5.6 L/100km. My test car was showing an average consumption of 10.4 L/100km when I picked it up, and although I drove in a rather spirited fashion I managed a little better than that myself, using almost exactly 10 L/100km overall in mixed city and highway driving, with a best average of 7.5 over a 130 km highway drive.

It should be noted that the engine requires at least mid-grade gas, and premium is recommended, so there’s a slight additional fuel cost there, while on the savings side of the equation the 228i features Auto Stop/Start technology that can shut down the engine at traffic lights for improved economy and reduced emissions. This can easily be switched off if you don’t like it, but I found it actually makes a lot of sense with the manual transmission, because it only shuts the engine off when the stop is long enough that you’ve put the car in neutral and released the clutch – as long as you remain in gear with the clutch depressed, the engine will keep running.

On the subject of available equipment, like all BMWs the 2 Series can quickly escalate in price once you start adding on desirable options, many of which come bundled in packages. On top of the Adaptive M Suspension my test car was loaded up with an additional $9,445 worth of packages and standalone options that included navigation, a sunroof, a rearview camera, auto-dimming exterior mirrors, park distance control, a heated steering wheel (all part of the $3,650 Premium Enhanced Package), Harmon/Kardon premium audio with satellite radio, a universal remote, "Comfort Access" proximity entry, adaptive headlights with highbeam assist (all part of the $2,200 Executive Package), Dakota leather upholstery, Valencia Orange metallic paint, speed limit information, and BMW online services with extended telephony, concierge services and real-time traffic services.

Loaded up then, the BMW 228i can easily push into the high $40,000 range, which is a lofty step up from other small sport coupes such as the Scion FR-S and Hyundai Genesis Coupe. That said, over my week with the BMW I found it to be quicker, more comfortable, more practical, better equipped and (not surprisingly) much more refined than either of those two cars. You get what you pay for, and if what you want is the most livable small rear-wheel drive sports coupe out there, it’s tough to argue against the BMW 228i.