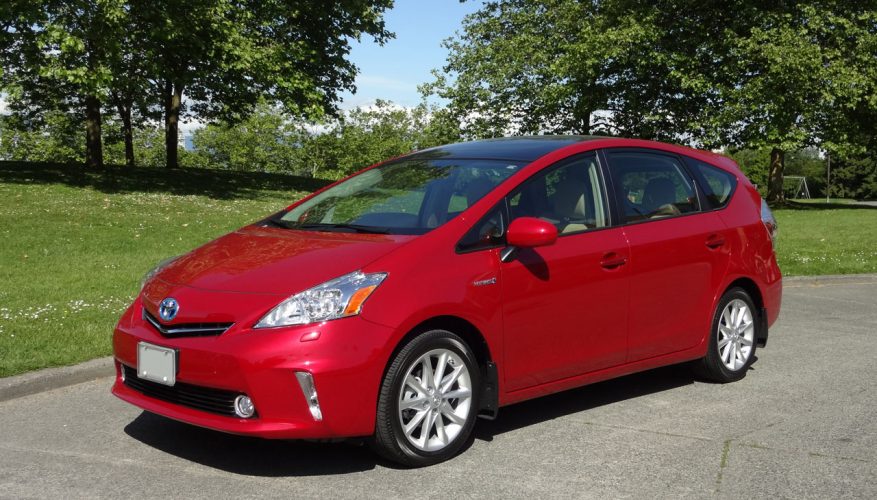 By: Simon Hill
When Toyota first introduced its iconic Prius to the world almost 15 years ago, car buyers could be forgiven for wondering just how robust the gas-sipping little hybrid would prove to be. Even Toyota hedged its bets by testing the Prius for three years in the Japanese domestic market before the car’s worldwide debut.

Since then however, the original Prius (now called the Prius Liftback) has proved itself to be a durable, reliable and generally rather practical. It soon became a favourite workhorse with taxi fleets in several North American cities (including Vancouver, San Francisco and New York), prized for its thrifty fuel economy and (thanks to its regenerative brakes) less frequent brake service.

In 2011, with more families and more taxicab operators cottoning on to the Prius Liftback’s practical charms, Toyota introduced the bigger Prius v. The "v", Toyota tells us, stands for versatility, and the Prius v certainly excels in that department.

It has 50 percent more cargo capacity behind the rear seats than the Prius Liftback (943 litres versus 612 litres), and almost twice as much cargo capacity with the rear seats folded flat (1,905 litres versus 1,121 litres). It offers a taller seating position and much more space in the back seat, with sliding and reclining functionality for rear passengers. It offers a more conventional and, I think, more upscale-looking interior layout compared to the Liftback, with padded soft-touch sections on the dash, front door uppers and console box top (the remainder of the interior, as expected is constructed of rigid plastics).

Under the hood, the Prius v uses the same drivetrain as the Liftback, with the addition of a bit more cooling capacity. From a mechanical perspective this means it gets the same 98-horsepower 1.8-litre Atkinson-cycle gas engine paired with same electric traction motor (for a net total of 134 horsepower), the same CVT transmission, the same regenerative brakes, and the same 1.3 kW/h nickel-metal hydride motive battery.

From a driving perspective, given the v’s additional heft, this makes it an even more modest performer than the already fairly relaxed Prius Liftback. If you floor the gas pedal the run from 0-100 km/h takes nearly 12 seconds, accompanied by an insistent drone from the hardworking gas engine. But chances are you won’t feel compelled to floor the pedal very often, because the hybrid drivetrain encourages an easy-going driving style. And when driven in an easy-going manner the Prius v is remarkably quiet and pleasant, and delivers extremely good fuel economy for such a capacious machine. Its official city/highway ratings are 4.3 / 4.8 L/100km, and my own consumption was right in line with this at about 4.6 L/100km in mixed driving (it appears I did somewhat better than most of the journalists driving the test car, as it was showing a long-term average of 6.4 L/100km).

If you’re even more efficiency-minded there’s an "Eco" drivetrain mode that dulls the performance somewhat (actually my driving notes say that it makes the performance "downright sluggish") in return for improved economy. There’s also a "Pwr" (power) mode that kicks in the gas engine a little earlier and more forcefully to provide a more spritely driving experience. On the other hand, if you want to keep the gas engine out of the equation entirely, you can engage "EV" (electric vehicle) mode and drive using just the electric motor for several hundred metres, provided you have sufficient battery charge.

Living with the Prius v for a week, I found it to be a pleasant if somewhat unexciting around-town conveyance, with plenty of room for myself, my family and all our gear. And if I occasionally missed the opportunity to roar from one traffic light to the next propelled by a powerful V6 or big turbo four-cylinder (such as you might find in the Prius v’s crossover competitors), that small sacrifice was more than made up for when I pulled up to the pump.

I do have a couple complaints, however: The first relates to outward sightlines, which are restricted at the front by the sweeping A-pillars and at the back by the upturned window line. The second complaint relates to the slightly unconventional controls Toyota has chosen to use for the gearshift and climate control system, which I find awkward in practice. The Prius gearshift, which is the same as in the Liftback, isn’t difficult to use but is peculiar enough that Toyota feels compelled to put a beeper inside the cabin to inform you when you’ve selected reverse. Unless you’re a big fan of beepers, this quickly becomes grating.

The Prius v also gets what Toyota calls "One Touch" climate controls, with a single knob used to select and then adjust functions including the fan setting, temperature, and air distribution. In practice this means you need to take your eyes off the road in order to adjust anything, and most of the time I found myself changing the wrong setting, turning down the fan when I wanted to decrease the temperature, or turning up the temperature when I wanted to turn up the fan.

Depending on which package you select (there’s a Luxury Package, a Touring Package, and a range-topping Touring + Technology Package), you can add XM radio, display audio with navigation, synthetic leather seating, integrated garage door opener, auto-dimming rearview mirror, heated front seats, a panoramic sunroof (with weight-saving resin roof panels and an automatic sunshade), bigger 17-inch styled alloy wheels, a premium 8-speaker JBL audio system with 7-inch display, dynamic radar cruise control, intelligent parking assist, and a pre-collision system. My test car was fitted with the Touring package, pricing out at $35,125 destination included, but the one thing I’d have preferred was to have the synthetic leather seating as a standalone option: I liked the panoramic roof, big alloys, navigation system, and other Touring Package equipment, but I’m not really sold on Toyota’s SoftTex faux leather.

I am, however, sold on the practical merits of the Prius v. Buyers will want to compare the Prius v against competitors including the Ford C-Max Hybrid and the original Prius Liftback, but the v impresses with a relaxed, comfortable ride, plenty of interior space, and fuel economy that’s leaps and bounds ahead of comparably-priced conventional crossovers.
©(Copyright Canadian Auto Press)
Car Shopping Tools