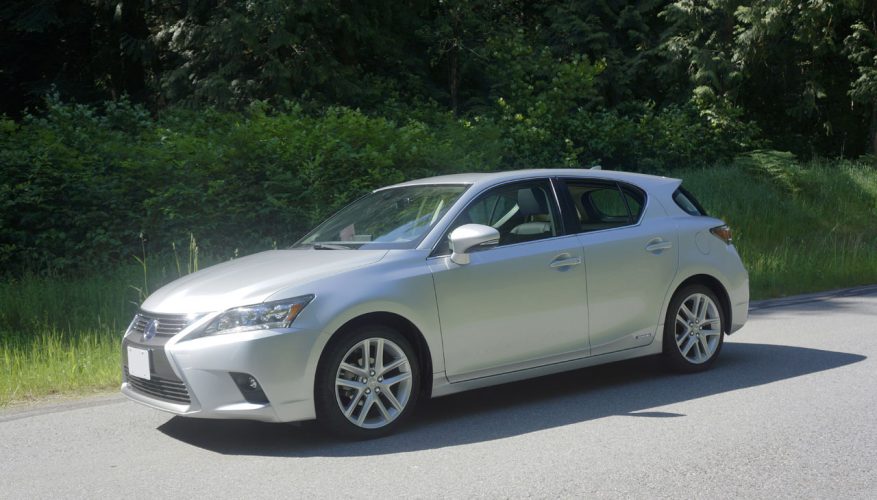 By: Trevor Hofmann
All it takes is one quick glance at the new CT 200h to see the big change for 2014, the adoption of Lexus’ new trademark spindle grille. As with all cars and SUVs in the luxury brand’s lineup, the uniquely attractive front fascia appears as if it was designed for the car from the beginning, even though in the case of this entry-level model not all that much else has changed.

Let me clarify that last point, as it’s only partially true. The front styling is obviously new, but the additional exterior updates are subtler, such as new 10-spoke, 16- and 17-inch alloy rims, a new shark fin-style roof antenna, and a more horizontally-shaped rear bumper integrating cool new L-shaped reflector housings and a black diffuser-style centre section for a sportier stance.

Inside, the 2014 CT 200h receives yet more updates. First and foremost, Lexus upgraded the car’s tactile quality so that more surfaces are soft to the touch. Even nicer, the binnacle shading the primary instruments gets light grey contrast stitching to match stitching on the leather wrapped steering wheel, door inserts, and seats, while metal film trimmed switchgear on the reworked centre console offers the look and feel of high-end audio components.

Ahead of the brightly lit electroluminescent primary gauges, Lexus has added a new leather-wrapped steering wheel measuring 370 millimeters in diameter, while controls on the spokes are kept to a minimum, giving the wheel a sportier appearance. Atop the centre stack is a new TFT multimedia infotainment display actuated via a renewed second-generation Remote Touch Interface (RTI). The control switch is now easier to use, which should erase previous criticisms of the once unorthodox design. I’ve always liked the old computer mouse-style controller, but I have to agree the new setup is user friendly.

Within the infotainment display is an updated display audio interface accessible via a new centre console-mounted controller, as well as a new navigation system, the latter named Electro Multi Vision/Navigation (EMV/N). Both include new functions, better usability and improved hands-free and voice recognition control.

Lexus doesn’t offer a Mark Levinson audio upgrade with the CT, but its stock stereo is quite innovative. All the usual features are present, such as AM/FM/CD/MP3/WMA capability, aux jack and USB connectivity, SiriusXM satellite radio and Bluetooth hands-free with audio streaming. Six speakers give sound to the base car, or 10 with either Premium trim, as tested, or the Technology package. The innovation lies in these speakers, as they’re made from bamboo fibre, plant opal and charcoal, all combined in an injection moulding process that results in the world’s thinnest speaker diaphragm for better sound quality. They sound great for most musical styles, especially classical and jazz, while pop and dance were ok, but I noticed distortion (and I’m not talking about the kind of Gibson SG double neck humbucking pickup distortion that wails through Jimmy Page’s Valco Supro Thunderbolt) when I cranked up Zeppelin’s What Is And What Should Never Be.

Being that speed rises as favourite tunes get louder and faster, it’s a good thing Lexus packs the CT full of safety gear. Par for the course are all the usual airbags including two for front occupant knees, plus standard four-wheel discs with ABS, electronic brake force distribution and brake assist, as is traction and stability control, and tire pressure monitoring, while the CT can also be had with tire pressure warning, rearview and back guide monitors, and a self parking system dubbed Intuitive Parking Assist.

Lexus offers synthetic leather upholstery, dubbed NuLuxe, in base trim, plus optional leather. My tester featured the leather, which is exactly the way I like it. Natural, comfortable and breathable thanks to perforated cushions, the CT’s seats are designed for long distance traveling, supporting in all the right places while offering up adequate side bolstering to hold the torso in place during spirited cornering.

Yes, despite being based on a Toyota Prius, which I must admit offers commendable handling for such a functional hybrid, the CT is much more responsive amid twisting curves. The car’s low-slung sporty styling suggests this, so it’s good that its sport-tuned suspension delivers. This 2014 model has been upgraded to improve cornering, ride quality and NVH levels with a tighter body structure achieved by adding more spot welds and using more adhesives. A more rigid body allows for a different suspension setup that not only makes for better handling, but also a more compliant ride. Lexus changed the spring rates, added new damper valves, and replaced the rear stabilizer bar, resulting in a really enjoyable car in the curves, yet the kind of comfort levels expected of a Lexus. If you want better performance in the corners, opt for the F Sport package that upgrades the suspension and wheel/tire package as well as adds styling enhancements and more features.

One thing Lexus didn’t mess with is the CT’s powertrain. Behind that new grille is the tried and tested 1.8-litre, DOHC, 16-valve Atkinson-cycle four-cylinder incorporating variable valve timing “with Intelligence” (VVT-i) on the exhaust cam. This little engine might only make 98 horsepower and 105 lb-ft of torque on its own, but combined with Lexus’ Hybrid Synergy Drive system a total of 134 horsepower and 153 lb-ft of torque drive the front wheels. Again, this isn’t pavement-scorching output, but press the console-mounted “Power” button and the electric motor’s 100-percent of immediate thrust from zero rpm makes it feel extremely quick off the line.

This is critically important, as the CT 200h isn’t only an extremely efficient premium hybrid vehicle with claimed fuel economy that read 4.5 L/100km city, 4.8 highway and 4.6 combined, which no doubt appeals to fuel economy savvy buyers and eco-minded consumers alike, but it’s also the gateway to Lexus ownership, being the brand’s smallest and least expensive car. Therefore those moving up from a Toyota (or competitive brand’s) product to a spindle grille “L” badged alternative will no doubt want a little performance to go along with their hybrid experience.

Practicality is an important factor too, and that’s something the CT has in spades. First off, it’s a four-door hatchback design. Like the Prius, it’s extremely roomy inside, albeit not as tall, which aids its sleek, sporty styling. Still, seating up front is good, even for taller folk, while these same body types might find knee-space in back a bit tight. I certainly had no problem fitting in, finding rear seat space ample with room to spare for my five-foot-eight frame. Additionally, its 405-litre (14.3 cu ft) cargo hold is larger than many midsize sedan trunks, and therefore should be good enough for most peoples’ needs. Lay the standard 60/40 split-folding rear seatbacks flat, however, and its luggage capacity grows to a sizable 965 litres.

At the end of a thoroughly enjoyable week, I only had a few minor complaints. First, the CT lays so low to the ground that I had trouble opening the doors without scraping their bottoms on certain sidewalks. I’ve parked in the same spots with other cars and never experienced this before, so you’ll want to warn passengers of this. Second, the new infotainment controller I mentioned earlier is similar in size and shape to the drive mode selector, but the latter is brighter comes finished in brushed aluminum with a glowing blue ring around its base, so I kept reaching for the drive mode selector to change the radio station. When I finally figured out the right one to twist, the preselected stations didn’t always react to a push of the rotating selector, instead requiring multiple presses to select the right station. These are miniscule problems in an otherwise impressive compact luxury car, easily overshadowed by its fabulous fuel economy, enjoyable driving experience and loads of top-drawer features.

Just above base, the offers LED fog lamps, LED headlamps, larger 17-inch rims inside 215/45 tires, aluminum scuff plates, a power moonroof and more, while the Premium packaged car I drove added leather and the 10-speaker display audio system I mentioned earlier, a backup camera, an auto-dimming rearview mirror with an integrated compass, auto-dimming side mirrors with reverse tilt that are also linked to driver’s seat memory, although you lose the larger wheels and tires and aluminum scuff plates of the Touring model, not to mention the rain-sensing wipers of the base model.

You get all these back if you upgrade to either the Technology package or the F Sport package, plus for the former a single CD player and a navigation system with RTI. The F Sport adds a unique front grille design, rear spoiler, a three-spoke F Sport steering wheel, special F Sport leather seats, metal-look interior trim, aluminum sport pedals with rubber inserts, F Sport scuff plates, an F Sport centre wheel ornament, F Sport wheels, plus front and rear performance dampers.

2014 Lexus CT 200h pricing starts at $30,950 plus $1,995 for freight and pre-delivery prep, while my Premium tester came to $37,750. Good value? If you want a sporty Cadillac hybrid with similar features (albeit with a plug) you’ll be paying twice that amount and losing a lot of practicality. As far as entry-level luxury cars go, the CT 200h makes a lot of sense.
©(Copyright Canadian Auto Press)
Car Shopping Tools