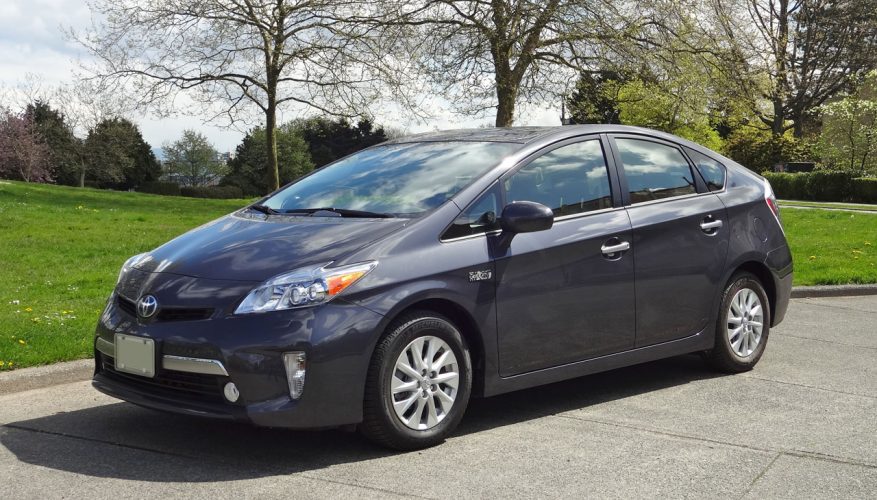 By: Simon Hill
As hybrid and electric propulsion systems mature, buyers can be forgiven for perhaps getting a little confused about what models are available, and exactly how their individual powertrains differ from each other.

Take the Toyota Prius Plug-in Hybrid for instance: Launched rather quietly into the Canadian market for the 2013 model year and unchanged for 2014, the Prius Plug-in Hybrid is visually almost indistinguishable from the regular Prius. If you drive longer distances or in a lead-footed manner, it can also be virtually indistinguishable in operation. But for city dwellers that typically drive short distances in a moderate fashion, and have access to power at home, the Prius Plug-in can seem like a substantially different and much improved car.

The key difference between the Prius Plug-in Hybrid and a regular Prius is the installation of a higher-capacity 4.4 kW/h lithium-ion motive battery under the rear cargo floor, replacing the 1.3 kW/h nickel metal hydride battery used in the regular Prius. There’s also a charging port on the car’s passenger-side rear fender, allowing you to charge up the motive battery when parked.

In other respects, the drivetrain is the same as the standard Prius, with the same 1.8-litre, 98-horsepower Atkinson-cycle gas engine and CVT transmission providing internal-combustion power, the same electric traction motor feeding power to the front wheels in either electric-only or electric-assist mode, and the same regenerative brakes charging the motive battery back up when you decelerate.

The larger motive battery means that instead of being able to drive only about 1.5 km at low speed in electric-only mode, the Prius Plug-in Hybrid can drive up to about 24 km at normal speeds in electric-only mode (I was getting about 20 km of range per full charge). So if you live close to your work, or generally only use you car to run short errands, you can go about your daily business without burning any gas or creating any pollution. At least, most of the time …

The gasoline engine will kick in to help things along if you bury your foot deeply into the throttle, and occasionally even if you aren’t accelerating that hard but are, say, climbing a steep hill. It will also sometimes kick in for less obvious reasons that seem to do with climate control demands or other logistical requirements that I couldn’t quite figure out. There’s an energy monitor available in the central infotainment screen that shows you in an easy-to-grasp pictogram whether power is being routed from the battery to the drive wheels, the engine to the drive wheels, the regenerative brakes to the battery, or what-have-you, but it doesn’t tell you why the internal combustion engine is running in non-obvious situations. That might be a nice thing for Toyota to add – perhaps little icons for the A/C or heating systems or what-have-you, and the power route between the engine and the appropriate icon could light up as appropriate.

As an inner city dweller living in a reasonably mild climate (it does snow in Vancouver, but not often), I fit the ideal profile of a plug-in hybrid driver, and indeed I found that the Prius Plug-in made a great deal of sense for my use. For 90 percent of my driving, the electric range was sufficient to get me there and back, and I was even able to take advantage of some free charging stations when shopping. Back at my residence, the Prius Plug-in was able to fully recharge its battery overnight using a standard 120V power outlet, so I started each day with full electric range, and only heard the gas motor start up a few times, and then not for very long. I certainly didn’t use any appreciable gas for most of the week, despite going grocery shopping, running the kids to school, driving to the marina to go sail racing, running a load of empties to the bottle depot, and much more.

When I finally got out for a longer run, the Prius Plug-in quietly fired up its gas engine once the battery juice ran out, and from that point forward operated just like a normal Prius, shutting down at traffic lights, creeping forward in stop-and-go traffic without the engine running, and accelerating with acceptable briskness when pushed. Thanks to the CVT transmission setup, the gas engine drones noisily if you accelerate hard, but it’s very docile and quiet if you drive with moderation, to the point that oftentimes you don’t realize it has started up. Driving from one municipality to another in hybrid mode, right through the congested heart of the city, I consumed 4.7 L100/km. The rest of the week I used no fuel at all, and didn’t even have to pay for all the electricity I used thanks to those free charging stations.

How long electric cars will continue to garner such perks is anybody’s guess, but even if I’d paid for all my electricity the cost would have been outstandingly economical. The math is complicated by the fact that residential electric meters only tell you total usage, not individual outlet usage, and I pay more at certain times than others, so I have to back-calculate everything and average it, but if 4.4 kWh of power takes me 20 km and my average cost for a kWh of power is 8 cents, that means it’s costing me 8 cents to drive 4.5 km, which is 1.77 cents per km, or about $1.77 per 100km. By comparison, at the current gas price of $1.45/L, I’d need to get about 1.2 L/100km to achieve the same economy while moving along using gasoline.

Outside of all the fuel-savings and low-emissions benefits of the Prius Plug-in Hybrid, it remains, like its regular hybrid sibling, a very practical conveyance. It has decent room for five, a 612 litre cargo capacity (which can be expanded to 1,121 litres with the back seats folded), plenty of gas-powered range for road trips, and pretty much all the amenities we’ve all become used to in Toyota’s fuel-efficiency icon.

The base Prius Plug-in Hybrid starts at $37,325 including the $1,620 destination fee and has power locks and windows, automatic air conditioning, AM/FM/XM/CD/MP3 audio with Bluetooth connectivity, an auto-dimming rearview mirror, tilt and telescoping steering, heated front seats, smart key with pushbutton start, cruise control, a backup camera, 15-inch alloy wheels, heated power side mirrors, traction and stability control, and all the expected airbags and safety gear. It should be noted that while the interior is built mostly out of rigid plastic, much of it is plant-based "eco plastic," so even the interior is environmentally friendly.

My test car came with the Technology Package, and I was impressed with the JBL audio system, but less so with the SoftTex leather seating, which doesn’t measure up to the faux leather used by various German manufacturers including Volkswagen. I was also a little puzzled by the pictogram for the dynamic cruise control – it’s different from what most manufacturers use, and at first I thought it was a button to activate a pedestrian warning sound when running in electric mode.

Speaking of being different, when Toyota introduces the next-generation Prius (which is slated for 2015), I’m hoping they get rid of the needlessly different shift knob and install something more familiar to most drivers. My beef isn’t that it’s difficult to understand, because you do get used to it. My beef is that because it’s different, Toyota feels compelled to install an obnoxious beeper inside the car letting you know when you’ve engaged reverse. It makes backing up a real trial.

That quibble aside, the 2014 Prius Plug-in Hybrid is an efficient and genuinely practical choice that certainly proves its worth in city driving. The question remains whether it proves its worth well enough to justify the several-thousand dollar price difference compared to a regular Prius, but for buyers who foresee driving a lot of short distance hops, and keeping their vehicle for a long time, the answer may indeed be "yes" – especially if gas prices maintain their lofty level.