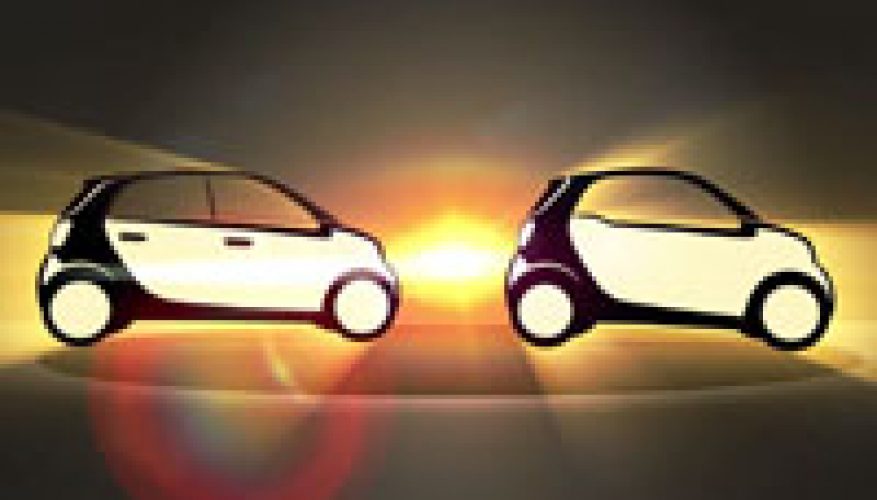 By: Trevor Hofmann
Daimler’s Smart brand has carved out a unique niche with a loyal ownership following in the microcar segment, but no one including the German automaker itself would argue against the need for a second, larger model to help grow the brand. This need has become even more relevant now that arch rival BMW has created an eco-friendly sub-brand within its blue and white roundel division, with its first entry-level model, the plug-in electric i3, already enjoying significant attention and promising initial sales.

Along with a completely new Fortwo two-seater, Smart will be resurrecting the stillborn Forfour. The Forfour, as the name implies, will seat four and therefore be capable of battling it out with the i3 as well as other four-seat microcars such as the Chevrolet Spark, Fiat 500, Mitsubishi i-MiEV and Mirage, Nissan Micra, and Scion iQ.

The upcoming Fortwo replacement appears to be designed in a similar monobox body style as the last two generations, with a profile that looks to carry over the model’s trademark Tridion steel safety shell including its exposed metal framework. The Forfour looks as if it repeats the same design, albeit with an extended wheelbase.

By the look of the artist’s rendering it seems like it’s all status quo at Smart with respect to other styling details too, with a new design that, from side profile at least, builds on the enviable success the brand has enjoyed in the ever-burgeoning eco movement. What lies under the new third-generation Fortwo and all-new Forfour’s skins, however, will be a marked change. The cars are being co-developed with Renault, the French automaker getting its own version to be badged Twingo (which will replace the Twingo that’s currently on sale).

The Twingo, which showed up in production trim last March at the Geneva auto show, will power the rear wheels by the same rear-mounted engine, although the two brands will use distinctively different exterior and interior styling. One exterior detail that will be shared between the French and German brands, mind you, will be a unique set of honeycomb headlights.

So far Smart has remained mum about the two models’ powertrains, but the brand will likely utilize one or both of the three-cylinder engines powering the little Renault. The base Twingo makes use of a 71 horsepower 1.0-litre I-3, while a turbocharged version loses 100 cubic centimeters for a total of 900 (0.9 litres) yet makes 90 horsepower. Also expected, new Fortwo and possible Forfour Electric Drive models will rejoin the fray, helping Smart to go head-to-head with the aforementioned BMW i3 and other subcompact EVs.

Smart hasn’t made any mention about transmission choices, but hopefully they’ve planned for this carefully as the current Fortwo’s shock-shifting gearbox hasn’t gone over very well, other than helping to return strong fuel economy ratings. While no fuel economy estimates are available for the upcoming Smart cars, the most fuel-efficient Twingo achieves about 4.2 L/100km city/highway combined on European cycle tests, so if the ForTwo and Forfour can come close to this they’ll be highly successful.

We’ll know more when the third-generation Smart Fortwo and Forfour are introduced at the Paris auto show during the first week of October.
©(Copyright Canadian Auto Press)
Car Shopping Tools