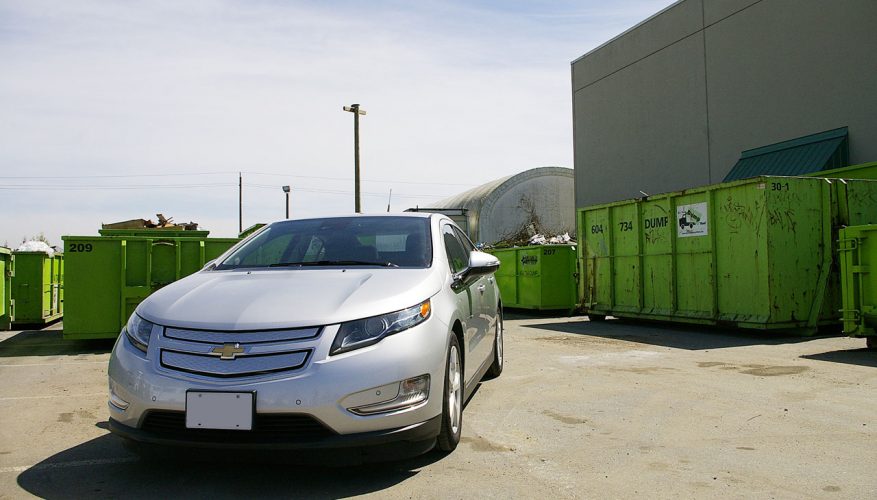 By: Benjamin Yong
Maybe it was the gloss white dash in the interior or the green leaf that flashes across the screen when you open the door, but my first thought when getting into the 2014 Chevrolet Volt was that I was meeting EVE, the plant-loving robot from the Disney movie WALL-E.

The Volt can’t fly, but entering its fourth year of production it remains a technological marvel that many non-EV enthusiasts still don’t quite understand. Then again, with a sticker price this year that’s $5,000 cheaper than last year’s model, there are a lot more interested parties asking questions.

The Volt is an extended-range plug-in vehicle with a lithium ion battery, an electric motor, a smaller motor slash generator, and an onboard gasoline-powered internal combustion engine. While the gasoline engine does transfer some power to the wheels, its primary function is to drive the generator to produce the electricity that propels the car.

With a fully charged battery, drivers can expect a range of 40 to 80 kilometres on pure EV mode, dependent on factors like terrain, driving style and ambient temperature – I averaged 63 km in mostly flat city conditions with the occasional highway trip. With the aid of the gasoline engine, total range is bumped up to 611 kilometres.

To achieve greater efficiency, engineers spent a lot of time on the vehicle’s aerodynamics, such as making the front fascia rounded and flush to mitigate air resistance. You might notice that the Volt and Chevrolet Cruze share some aesthetic similarities, but the connection goes deeper than just appearances. Both utilize the same underpinnings, although the roof on the Volt is several inches lower and the rear window aggressively raked back to cut down on turbulence.

There is no doubt that Chevy’s greenest automobile has a polarizing design. Its silhouette is half sedan, half wagon, but I think the front end looks fantastic and the liftgate’s mostly glass construction gives a cool see-through perspective from the front seat, reminiscent of the second-generation Honda CR-X. The centre console in the front cabin extends all the way to the back, meaning there is only seating for four adults.

You won’t find traditional dials or gauges anywhere, as all the information is displayed via one of the screens located either directly in front of the driver or in the centre stack. Trying to achieve optimal driving efficiency becomes a bit of a game: an eco-globe next to the speedometer floats up or down depending on how hard you accelerate or brake. Keeping it in the middle means you’re using as little energy as possible, a task more challenging than it might sound. I found myself drastically altering the way I pulled away at a green light, and even got into the habit of leaving more distance between myself and the car in front so I could recoup more energy through regenerative braking by slowly coming to a stop rather than jamming on the brakes at the last minute.

If you need help, pressing the leaf button on the dash will bring up all kinds of green hints such as using cruise control when possible to maintain a steady rate of speed, driving below 50 km/h to maximize electric range, and so on. An available Hold mode forces the gas generator to take over as the primary power source – useful during highway driving to conserve battery power for traveling in the city. Conversely, when a bit more performance is required there’s also Sport mode that will make the throttle much more responsive.

I had no qualms about the way the Volt feels on the road, which by and large is just like any other conventional car. Living in an apartment building rather than a house, however, created certain challenges when it came to charging. Fortunately, close to where I live there is easy access to a couple of Level 2 240-volt charging stations, capable of topping up the Volt’s reserves in about four hours. Connecting to a regular household outlet using the supplied cord lengthens that time to between 10 and 16 hours.

For those with longer commutes or the need to take extended road trips, the Volt is an ideal electric alternative, as you won’t experience the range anxiety of an electric-only vehicle like the Nissan Leaf or Mitsubishi i-MiEV, yet will get much better EV range and therefore reduced operating costs and environmental impact than with a regular hybrid.