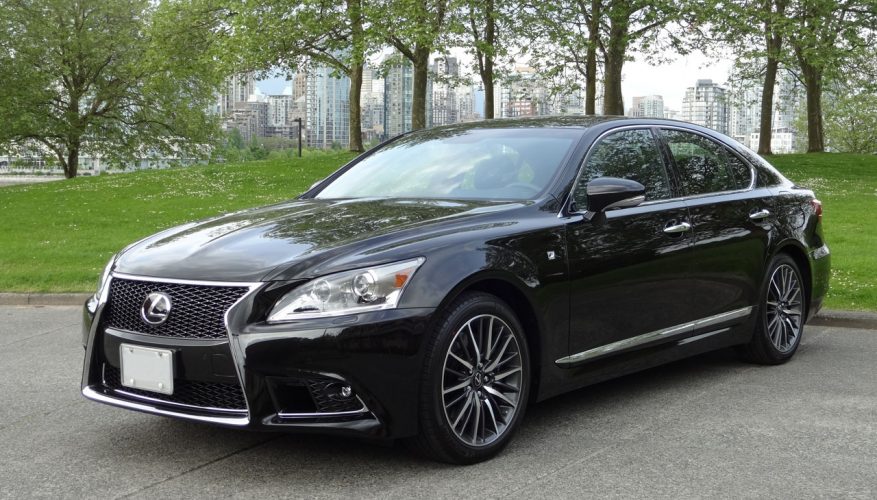 By: Simon Hill
True luxury resides in a conservative realm – quiet, smooth and comfortable; soft, serene and predictable. It’s likely no mistake then that the Lexus LS 460 is a conservative car. On the market since 1990, it is still only in its fourth generation 24 years later, with the current generation dating back to the 2007 model year.

Just because the LS 460 is conservative, however, doesn’t mean it’s unchanging: The current version of Lexus’ flagship full-size luxury sedan was thoroughly facelifted for the 2013 model year, getting a new front fascia with the now-familiar Lexus spindle grille, together with a redesigned hood and reshaped front fenders, and redesigned taillights and trunk lid at the back. An F-Sport package was also added for 2013, for those who prefer a little bit of a sporting edge to their luxury.

For 2014 there are a couple of additional minor updates including Siri Eyes Free for the infotainment system (to allow compatibility with newer iPhones), and improved access to the trunk, which can now be opened without the key fob in range when the vehicle is unlocked.

Other than that, the LS 460 remains its familiar, luxurious self. For those not acquainted with the LS 460, that means that it remains a car aimed at the heart of the luxury market: targeting the Mercedes-Benz S Class, the Audi A8, the BMW 750i and the Jaguar XJ.

It remains a car whose roomy interior is swathed entirely in supple leathers and soft-surface materials – even soft-surface door lowers – with supportive, infinitely adjustable front seats and acres of shoulder room and legroom for all seating positions (admittedly I never tried putting three across in the back seat, but with two in the back it’s amply roomy and comfortable). My only criticism would be the dash top, which in comparison to some rivals (and I’m thinking specifically of the Jaguar XJ here, with its stitched-leather dash top) is perhaps a little rubbery and moulded looking, at least in base form (apparently it’s leather covered in the LS 460 L Executive trim).

The LS 460 remains a car that’s not just packed full of the latest in technology, creature comforts and safety gear, but also chock-full of nice, unexpected touches. The "roll-over" temperature control readouts, reminiscent of an old-style odometer, are one such touch. I constantly felt like changing the cabin temperature just so I could see them roll. The illuminated seatbelt latches are another nice touch – all cars could use these! The soft opening and closing console bin is also appreciated, gliding smoothly up and back (although my teens pointed out that its arc of travel might interfere with skis if you use the ski pass-thru). There’s an automatic park brake option that’s highly convenient and seems to work well (it puts the electronic parking brake on when you select "Park", and takes it off when you engage a gear). Outside, the taillights, with their Lexus "L" logo pattern are yet another nice detail. There’s more, because everywhere you look the LS 460 is designed, as they like to say in the auto industry, to "surprise and delight," and it succeeds in this mission very well.

On the road, the LS 460 is, above all, composed and unruffled. It wafts you along in a serene, seamless hush, with only the most discrete rumble from the 386-horsepower V8 nestled under the hood. (Most V8s lurk under the hood. This one nestles. Although in AWD models it nestles with less output at 360 horsepower). In normal driving, the LS 460 one of the quietest cars I’ve ever experienced. I tried out the test car’s paddle shifters, and while I did note a little bit of delay in the execution of the shifts, what got written down in ALL CAPS AND AN EXCLAMATION POINT! was that during hard acceleration the loudest noise in the car was the precise mechanical clicking of the alloy paddle shifters as I rowed through the automatic transmission’s eight forward gears. Fuel economy, if it’s important in this market segment, is rated at 13.5 / 8.7 L/100km (city/highway) for the all-wheel drive model I drove, running on the recommended premium fuel, and my experience is that you’ll use all that and a little more.

My test car was equipped with the $7,450 F-Sport package, which in addition to unique wheels and various bits of body trim has an adaptive variable suspension that can slightly firm up the ride to provide more engaging handling. I should explain that firm is a relative term here, as even in F-Sport trim the LS 460 still offers a very accommodating ride, soaking up all but the very worst road imperfections with nary a whisper (although on the rare occasion it does reach the end of it’s suspension travel, and does so with a solid whump). I found that in day-to-day driving around town in dense traffic no amount of F-Sport suspension magic can disguise the car’s heft, but in suburban and highway driving the F-Sport has a commendably light-on-its-feet feel.

True luxury should leave you wanting nothing, and in this sense the LS 460 mostly succeeds, but there were a few items I’d like to see addressed: The rear seats don’t fold down (there’s just the ski pass-through) so the admittedly large 509-litre trunk can’t be easily expanded into the passenger compartment. The turning circle is also rather large at 12.2 metres. The key fob is inconveniently large, too (yes, it’s a bit of a nit-pick, and apparently there’s a wallet-size smart key that wasn’t handed out with the press car, but still). The radio shuts off immediately when you shut off the engine, unless you shut off in neutral and then shift to park. It would also be nice if the menu system provided multiple routes of access to the same function, because as it is, it can sometimes take some trial and error to find the function you want (I pressed "Menu" then "Setup" then "Audio" trying to get to the tone settings, but no dice. Instead, it turns out I needed to press "Radio" then "Sound"). Lastly, I still find the haptic feedback infotainment controller to be sophisticated in theory but fiddly to use in practice, although my understanding is that Lexus will soon be introducing a more familiar puck-style controller on most models, with a Smart-phone like touch controller for other models including, I’d guess, the LS 460.

My test car priced out at $97,395 ($87,950 for the LS 460 AWD, plus $7,450 for the F-Sport package and $1,995 in destination fees). It’s a substantial chunk of change for sure, but when measured against its British and Germanic rivals the Lexus LS 460 offers comparable levels of luxury at a very competitive price.