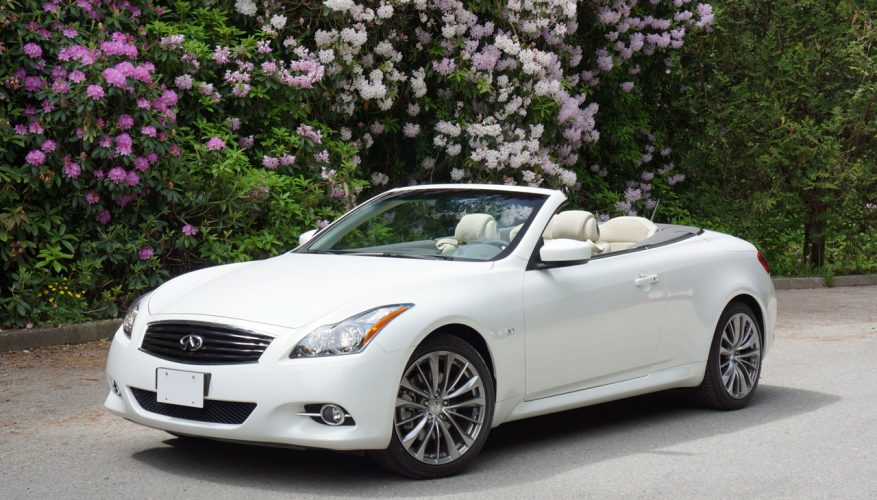 By: Trevor Hofmann
The first time I took the keys to a Q60 Convertible was in San Francisco and it didn’t bear the new name, but rather a different alphanumeric combination: G37. That was in the spring of 2009, a car that Infiniti loaned me so that I could drive from the Bay Area to Monterey where I would take part in the annual Western Automotive Journalists Media Days program.

A better highway cruiser couldn’t be had, especially with the retractable hardtop lowered and California’s sunshine beaming down upon me, which is exactly how I felt when I took to the road this time around. Actually, despite the name change the six-year-old model hasn’t changed all that much since its inception in 2008 as a 2009 model. For 2011 it received a subtly redesigned front fascia plus new 18- and 19-inch wheel designs; for 2012 it was given a wider rear track, modified rear suspension, rear pop-up roll bars plus available Bose front-seat speakers and climate-controlled front seats; and for 2013 the top-line IPL sport model slotted into the lineup. Along the way a number of features were added while others went from the optional column to standard. Some might complain that the Q60’s grille design hasn’t kept up to Infiniti’s bolder, arguably more attractive new look, which is a bit of a problem when it comes to brand continuity, but to be fair the car has aged extremely well and still looks fabulous from nose to tail.

This is no small feat for a retractable hardtop convertible. Their tops lowered, these cars normally look quite handsome, with only a couple of the Q60’s rivals appearing a bit awkward due to bulbously bulging hunched backsides, but raise their roofs and some of the Q60’s competitors start to look as clumsy as Quasimodo. Both G37 and Q60 convertibles have long been great looking with their tops up or down, the model’s lines long, lean and elegantly athletic. It’s still as attractive as any of its contemporaries and better looking than many.

The same goes for the Q60 Convertible’s interior, which takes the elegant theme upward a few significant notches. Compare it to most competitors and the Infiniti looks and feels as if it must be priced higher, with a quality-built solidity that easily sets it apart. Soft surfaces are everywhere they’re required to be in order to qualify as a premium car, and then some, upstaging some of its European rivals in this respect, while the metals and woods are all as authentic to look at and touch as they genuinely are, because they’re real aluminum and hardwood veneers, and are beautifully finished. The base Q60 Convertible’s seats are surfaced in leather, incidentally, and while this might seem like something expected in a premium drop-top it’s not the case for its main pleather-lined German competitor, which only offers leather as an option.

Value has been an Infiniti hallmark since the brand came into existence in 1989, and that value proposition has only become stronger since its cars have improved; let’s face it, the 1990 M30 Convertible wasn’t much competition for the 1990 BMW 325i Cabriolet. Certainly, at $58,400 plus $1,895 for freight and pre-delivery prep (which is only $1,000 more than it cost six model years ago in 2009) the 2014 Q60 Convertible is priced in the same range as the 2014 BMW 328i Cabriolet, but let’s factor in that the Q60 Convertible comes standard with Infiniti’s award-winning VQ-series 3.7-litre V6, not a four-cylinder, Infiniti’s standard engine producing considerably greater output at 325 horsepower and 267 lb-ft of torque than even the German’s pricier 435i Cabriolet, and all of a sudden the blurred lines around its price tag come into better focus. That’s just the beginning of the value proposition, however.

As mentioned, luxuries like leather upholstery come standard on the base Sport model, as does proximity sensing remote access with pushbutton ignition, electroluminescent primary gauges, a powered tilt and telescopic steering column that synchronizes the gauge cluster with the column for optimal visibility no matter how tall you are, solid-magnesium paddle shifters, eight-way powered driver’s and front passenger’s seats with powered lumbar support for the former, a seven-inch full-colour infotainment system with an integrated rearview camera, 13-speaker Bose “Open Air” audio with personal speakers integrated into the front headrests, satellite radio, USB and iPod connectivity, a multi-function trip computer with fuel range and outside temperature display, an auto-dimming inside mirror with a HomeLink universal remote, HID bi-functional xenon headlights, rear sonar parking system, adaptive automatic climate control, and a gorgeous analog clock that looks like it’s worth the price of admission alone. What’s more, the Q60 Convertible with manual gearbox comes standard with 19-inch alloy wheels (the automatic gets 18s).

The example I tested, a Q60 Convertible Premier Edition in stunning Aspen Pearl paint and exclusive Wheat tan perforated leather was an even better deal despite its slightly higher price point. With a window sticker of $61,700, the Premier Edition adds climate controlled front seats with heating and cooling, along with Infiniti’s advanced navigation system that offers aerial and landscape views, NavWeather, NavTraffic, the Zagat restaurant guide, and more. While still a thoroughbred performance car, this model loses its paddle-shifters for a more luxurious approach, but manual-mode remains via the shift lever. Alternatively, if you want to keep the paddles as well as navigation you can add the $3,750 Hi-Tech package to the base Sport model, which also includes an advanced climate control system, rain-sensing wipers, intelligent cruise control with preview braking, and front pre-crash seatbelts.

It should be noted that Infiniti’s automatic gearbox is like few others on the market. First off it’s a seven-speed unit, delivering quick, smooth shifts no matter how much power is being coaxed out of the engine. The transmission’s pièce de résistance comes when downshifting, mind you, where it can be set to automatically blip the throttle to match the oncoming gear, making you sound like Infiniti Red Bull Racing’s Daniel Ricciardo slowing down to enter pit lane ahead of slotting his car into the centre winner’s position at this year’s Canadian Grand Prix. The sound emanating from the Q60’s exhaust while doing so might make you smile as wide as the amiable Australian too, not to mention the mechanical noises the 3.7-litre V6 makes at full song.

Infiniti’s VQ six-cylinder has been celebrated on Ward’s annual 10 Best Engines list for almost as long as it’s been in production, as it’s a mechanical masterpiece. Yes, others have newer tech features such as direct injection and cylinder deactivation for fuel saving, let alone idle-stop systems, etcetera, but none of those sound as thrilling as the revs rise, and few put more power down to the rear wheels in base trim.

The Q60 Convertible is a joy to drive quickly. The car ramps up speed at an alarming rate, accompanied by impressively quick shifts and agility in the corners few cars weighing more than two tons can achieve. Balance is inherently built into its design, due to 51/49 front/rear weight distribution (52/48 with the automatic) that comes as part of its front midship layout. The Q60’s wide track and low profile doesn’t hurt matters either, a shape that’s as effectively wind cheating as it is pleasing to the eye.

Despite its low roofline, interior headroom should be ample for larger folk up front, and my five-foot-eight frame was able to sit in relative comfort in back, although I’d be calling shotgun for anything further than a trip across town as legroom is minimal. The Q60’s trunk is the car’s downside, with a livable 291 litres (10.3 cu ft) available when the top is up, but a miniscule 53 litres (1.9 cu ft) left over when the three-piece hardtop is stowed away. But three’s a crowd anyway, right? Just leave your kids at home, throw your luggage in the back seat, drop the top and enjoy a weekend getaway for two.

Like I said at the onset of this review, a better highway cruiser couldn’t be had. That it also delivers such timeless styling, beautiful interior finishing, impressive array of features and breathtaking performance for such great value makes the four-season Q60 Convertible a car that’s still very worthy of your attention.
©(Copyright Canadian Auto Press)
Car Shopping Tools