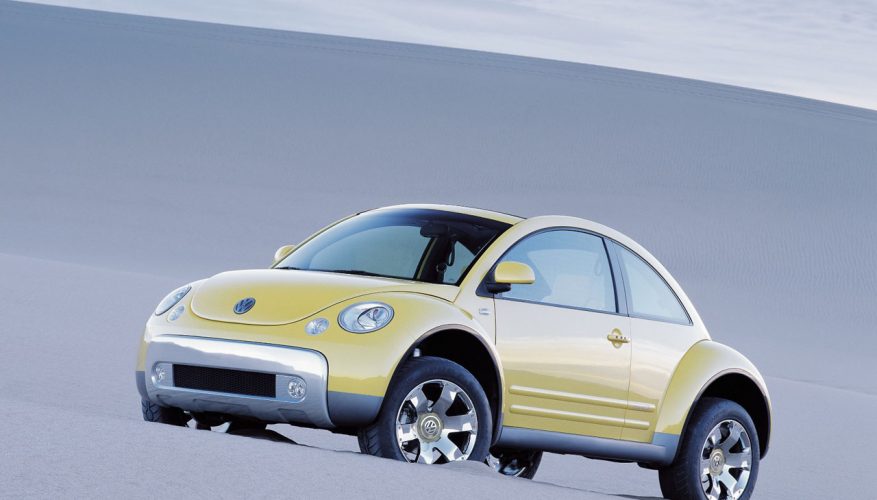 By: Trevor Hofmann
While some concepts seem to go from prototype to production in a mere blink of an eye, others linger around for decades before getting the official nod from on high. The latter is the case for the Beetle Dune Concept, which has finally been given the green light for production.

But didn’t the Beetle Dune Concept only just debut at the 2014 North American International Auto Show in Detroit last January, you say? You’re right. This reality, of course, makes it seem as if the brass at VW hardly gave the car a moment’s thought before signing off on production plans, but try to remember back to the Los Angeles auto show of 2000, when the New Beetle Dune Concept hit the stage wearing a not too dissimilar coat of yellow paint no less, and it’s easy to see that the Beetle Dune is by no means a new idea. By the time the first street-ready Beetle Dune leaves the production line in 2016, the concept’s incubation period will exceed 15 years.

Nevertheless, the folks heading up Volkswagen AG believe the time is right for the Beetle Dune. What’s more, the two-door coupe that showed up at Detroit will also be joined by a two-door convertible version, which makes a lot of sense being that a drop-top is much more dune buggy-like than the closed top car.

According to Car magazine in the UK, which broke the story, the production Beetle Dune will share the same dimensions as the concept, meaning that its track will measure 28 millimeters (1.1 inches) wider than today’s Beetle, and its ground clearance will get a 50-millimetre (two-inch) boost. This should mean the concept’s fatter fenders would make production too, along with its unique front and rear fascia designs.

Likewise no announcement of standard or available engines have been made, although the show car’s 210-horsepower turbocharged 2.0-litre four-cylinder makes sense, as does its six-speed dual-clutch automated transmission. A manual gearbox will likely be offered too, and while its off-road potential screams for a TDI diesel with all-wheel drive, don’t count on it.

According to Car, Europeans will be expected to pay another 2,800 euros (CAD$4,067) over and above the price of a regular Volkswagen Beetle.
©(Copyright Canadian Auto Press)
Car Shopping Tools