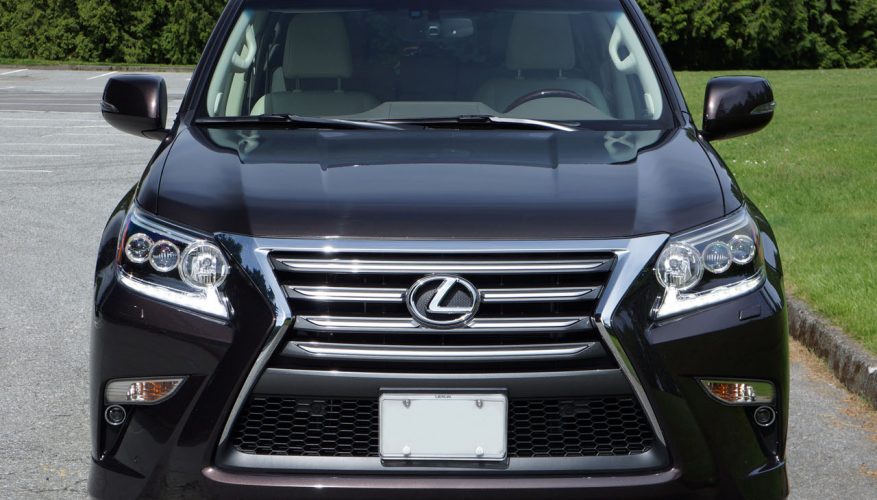 By: Trevor Hofmann
For those wanting a true luxury SUV with off-road capability and a price significantly south of six figures, choice is limited. Try and get that premium 4×4 in mid-size dimensions and the pickings are even slimmer. Fortunately such discriminating backcountry campers haven’t been forgotten by Lexus, as the Japanese luxury brand’s impressive GX 460 is as capable of trekking across rock strewn forest roads, slogging it out in mud bogs, and climbing sand dunes as it is at coddling its occupants in leather-lined, wood surfaced, feature-rich opulence.

It’s really the best of two sport ute worlds. Underpinning the GX 460’s revised body shell and beautifully detailed interior is nothing less than a Toyota Land Cruiser Prado, one of the most respected 4x4s in the world. It’s a traditional body-on-frame SUV, which means that it’s just as useful for towing heavy loads as it is for wilderness expeditions. The extent of my exploring during my test drive was kept to pothole infested inner-city alleyways, which I can attest were no problem for the GX. More impressive was how thoroughly smooth the ride was over such seemingly abandoned washboard or anyplace else I drove, even in Sport mode.

Yes, Lexus provides driver selectable modes to make the most of each driving situation, and as you might expect I left the GX in Sport mode most of the time. Of course I tested its centre default position and Comfort mode in order to make a report, both of which were expectedly softer than its sportiest setting, but being that I wasn’t able to venture very far off the paved path the Sport setting gave the big ute a slightly stiffer ride for improved handling.

On the highway the GX 460 is a dream, the ultimate cruising SUV. It loves long sweeping corners the best, but still takes to tight corners quite capably as long as speed is kept within reason. This has much to do with its full-time four-wheel drive with active traction control and Kinetic Dynamic Suspension System that reduces lean for better handling. KDSS also improves off-road capability by allowing each wheel to move independently. Ultra Premium trimmed models also include Multi-Terrain Select, which lets you choose between four driver selectable modes including Mud & Sand, Loose Rock, Mogul, and Rock, each mode regulating wheel spin so that you get maximum traction on almost any ground surface. This model also provides Crawl Control, which holds the throttle at a chosen rpm during more challenge off-road maneuvers. All GX models boast an incredibly tight turning circle as well, important for off-roading, but I also found it especially convenient when navigating city streets.

Throttle response from the 301 horsepower 4.6-litre V8 is more than adequate, either when jamming hard on the go-pedal off the line or during passing maneuvers, and like the GX’s ride, the six-speed automatic transmission’s shifts are ultra-smooth, almost imperceptible. You can leave it in Drive or slot the gear lever into manual mode for a more engaging experience. Likewise, the engine can only be heard when you want to hear it, at full throttle.

To minimize fuel consumption it’s best not to delve too deeply into that accelerator, mind you, the GX being a fairly hefty SUV at 2,326 kilograms (5,128 lbs) and therefore hardly easy on gas. Its Natural Resources Canada-claimed rating is nevertheless fairly good at an estimated 14.1 L/100km in the city, 10.0 on the highway and 12.2 combined. We can expect more realistic numbers when the 2015 model debuts later this year, as it will need to conform to the new five-cycle testing process.

As previously mentioned the GX 460 is ideal for towing, and comes with a rating of 2,954 kilos (6,500 lbs). New for 2014, Lexus added a Trailer Sway Control Brake System for more stability when hauling a load, while Premium models like the one I drove also come with an Automatic Load Leveling Rear Air Suspension system that automatically adjusts ride height when attaching a trailer or loading in heavy cargo. You can select a ride height mode from inside the cockpit too, opting for “Low” mode when loading up the cargo bay or “High” mode for increased ground clearance.

The GX also comes with Hill Start Assist Control that prevents rearward rolling when moving your foot from the brake to the gas pedal, and useful when under a heavy load or off-road it also boasts Downhill Assist Control to maintain a slow and constant speed when descending steep and slippery slopes.

All of these features can be modulated from within an interior that’s a cut above almost anything else in its class. The design should appeal to most everyone, as contemporary styling is mixed with old-world materials such as supple leathers and high-gloss wood trim. The expected soft-touch plastic surfaces can be found in all the right places; hard plastic only used on the lower door panels and lower console sides. Stitched leather covers the console sides just above, extending up into the dash. It’s used on the armrests too, and of course the seats, which are also perforated to allow my Premium tester’s cooled ventilation to do its magic.

A pewter coloured metallic trim surrounds the centre stack, highlights the steering wheel spokes where the redundant cruise and audio controls reside, and spans the dash in front of the passenger where it joins up with a beautiful strip of high-gloss wood before highlighting the door grips and other trim. That beautiful mahogany veneer can be found on the doors too, surrounded by the same metal trim on the upper panels and, just below, on the panel that surrounds the power window switches. Mahogany also surrounds the twin USB slots, aux plug and 12-volt power socket, as well as the cover of the cupholder lid. The steering wheel incorporates two sections of wood and wraps each side, where the hands naturally fall, in leather. Combined with my tester’s milk chocolate brown upper cabin treatment and Ecru cream-coloured lower hue, which included upgraded semi-aniline leather upholstery in Ecru front to back, the look is absolutely decadent.

Requisite in premium vehicles these days, the GX 460 is not without its share of top-tier electronics. A large eight-inch full-colour high-resolution Electro Multi Vision (EMV) touchscreen display provides access to a variety of infotainment functions, from voice-activated navigation and a rearview camera to an awesome sounding 17-speaker, 330-watt, 7.1-channel Mark Levinson 20 surround sound audio system. An interesting feature that would be especially handy off-road is the GX’s optional Wide-View Monitoring system. Four cameras are positioned around the vehicle to provide frontal, rearward and side views of the SUV, displaying images on the infotainment screen. This, of course, aids in parking too. All-round, the infotainment system is top-grade, although I was a little disappointed that Lexus couldn’t fit its fabulous haptic responding mouse controller onto the centre console. Instead, just ahead of the cupholders and massive storage bin, a bevy of off-road buttons give the console a purposeful appearance, which I must admit is an even more enticing sight for this 4×4 enthusiast.

Up above in the overhead console, a sunglass holder is also a welcome sight as I’m otherwise always looking for somewhere to safely store my shades. Then again the GX is missing an available panoramic glass sunroof, so those in back won’t be able to enjoy the sun and stars as much as those up front. To compensate, the powered tilt and sliding front moonroof is quite large.

Speaking of large, the accommodating eight-way powered front seats are sumptuously comfortable, both receiving powered lumbar support while the driver also benefits from two-position memory. Second-row seating is also very good. There’s no shortage of space in all directions, while second-row seat heaters and an automatic rear climate control system aid comfort levels. Grab handles are located on the front and rear door pillars, and there are pull down handles attached to the ceiling, so ingress and egress is easier for smaller or older folks.

Third row access is good too. Just slide the middle seat forward and climb in. The side steps really help in this situation. My five-foot-eight frame had no problem fitting in behind, with lots of head and shoulder room, although there’s not much space for feet and knees. I’d be ok trekking across town, but I’d probably want to limit my stay back there to 30 minutes or so. For kids, the third row should be just fine, as the seats themselves are quite comfortable.

There’s very little storage behind the third row, however, although the seatbacks power to reveal a sizable cargo hold behind the second row. The second-row seatbacks are set up in the most utile 40/20/40 configuration, allowing for almost every possible passenger/load combination. The only challenge might be when loading from curbside, as the GX 460’s swinging rear door was designed for its Japanese home market and therefore blocks access to the sidewalk when fully opened.

This is a minor issue with what is otherwise an excellent luxury sport utility. All of the GX 460’s recent upgrades have made it more competitive with its small handful of rivals, while Lexus’ smart looking spindle grille treatment transfers over from its car and crossover line to this SUV very well. A gorgeous interior brimming with tech features and surprisingly competent road manners make the GX 460 an off-road capable luxury SUV that’s worthy of recommendation.