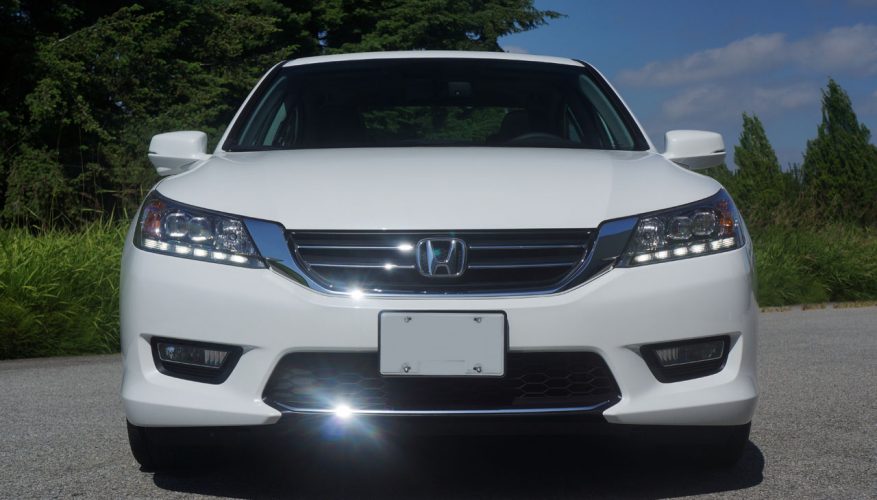 By: Trevor Hofmann
There are those who follow the crowd while others buck against the status quo, and then there are those who don’t think about either and just try to make good decisions after researching trusted sources. I believe there are a lot of Honda Accord buyers in this latter camp.

I’ve driven every generation of Honda Accord since inception and have always come away impressed. Even the ultimately bland styling years (the boxy second-generation from 1981–1985, the instantly forgettable fourth-generation from 1989-1993, and the ovoid sixth-generation from 1997–2002 come immediately to mind) were great cars for their era that were quite entertaining to drive. My first Honda Accord press car came from this latter generation, and I remember looking at it in disdain when first acquiring the keys and then after a week behind the wheel bringing it back with an entirely new respect for the car, the people who buy Accords, and Honda in general. I still feel the same way, although my level of respect has grown substantially.

This ninth-generation car, which I first drove a couple of years ago as a 2013 model, is as good as mid-size sedans get. I’m not going to go so far as to say it’s the best vehicle in its class, because people buy vehicles for different reasons and there are a lot of very, very good cars in the mid-size segment, but no maker builds a better mid-size sedan than Honda. It’s probably the best-looking Accord four-door since the sleek third-generation car with its cool pop-up headlights and rakish profile, the latest Sport and Touring trims looking downright sporty. A few upscale touches on my Touring tester include a chromed front grille, Acura-like projector-beam LED headlights with premium-level LED DRLs, attractive rectangular chrome-enhanced fog lamps, a narrow strip of chrome embellishing the lower front air vent, wafer-thin LED turn signals integrated into the exterior mirror housings, a strip of chrome visually tying both LED taillights together, and another narrow strip of chrome highlighting the lower lip of the blackened rear diffuser.

Inside, there has never been a more appealing Canadian-market Honda automobile. The new Accord has been given some premium touches to allow it to compete more readily with a recently upgraded mid-size class, such as a soft-touch dash top, full soft-touch door uppers in front and the same pliable surfaces covering the rear portion (and majority) of the back door uppers, not to mention other surfaces such as armrests. Chromed door handles complement brushed metallic centre stack and console surfacing, while a thick plank of wood-inspired trim starts at the front portion of each forward door and wraps into the dash. It’s not really trying to be wood, but it gives off the impression of luxury, an approach that I happen to like a lot more than the high-gloss photographed woodgrain on hollow plastic that used to adorn Japanese car interiors and unfortunately still rears its surgically altered, heavily made-up, blue-rinsed (and still ugly) head in some rivals.

Instead, the overall look of the Accord’s cabin is tastefully understated. A simple three-dial-style primary gauge package sits dead ahead of the driver (a tach on the left, large speedo surrounding a small black and white multi-info display at centre, and temp/gas gauges within a dial-like semicircle to the right), while twin large full-colour displays cascade down the centre stack above a dual-zone automatic climate control interface and a panel of quick-access infotainment buttons and knobs just below, the entire assortment letting everyone know that the Accord hasn’t forgotten it’s living in a digital age. The topmost eight-inch intelligent Multi-Information Display is for audio and phone info, the trip computer, rear camera and settings, plus satellite-linked 3D-mapping navigation, the latter item standard in Touring trim, whereas the lower screen is a display audio system for controlling an AM/FM/CD/MP3/WMA head-unit that sends great sound through six speakers and a subwoofer.

Adding to the car’s tech appeal is HondaLink with access to Aha and other cloud-based services, which is standard on EX-L models, plus Honda’s HandsFreeLink Bluetooth wireless phone connectivity that also incorporates text messaging and e-mail functionality; standard across the Accord line. Proximity sensing remote access with pushbutton ignition makes the overall Accord Touring experience much more convenient, while this model’s perforated leather upholstery comes heated front and rear for a level of luxury that might be unexpected to those moving up from an older Accord.

I have to say the Accord’s driving dynamics might be unexpected too. Certainly previous Accords drove well, the model always being considered one of the sportier entries in its mid-size segment. This version moved the driving experience up a notch however, delivering an effortless athleticism that really sets it apart from its peers. The car feels light on its 235/45R18 Michelins, as if it has no rolling resistance at all, yet in the corners it grips with greater tenacity than some “sport sedans”, a term that oft gets misused.

Behind my test car’s chromed grille was Honda’s 16-valve, direct-injection, DOHC, i-VTEC, 2.4-litre Earth Dreams four-cylinder, good for 185 horsepower at 6,400 rpm and 181 lb-ft of torque at 3,900 rpm. It won’t chirp its front wheels like the available 278-horsepower 3.5-litre V6, but it moves along with ample enthusiasm and returns much better mileage when driven more modestly. Natural Resources Canada claims 8.8 L/100km in the city and 5.8 on the highway for the six-speed manual-equipped four-cylinder model or an even stingier 7.8 city and 5.5 highway rating with the ultra-efficient continuously variable transmission (CVT), although you’ll only want to use these numbers for comparison purposes as the old two-cycle Canadian rating system will be replaced with a much more accurate five-cycle process for 2015. After a week’s mixed city/highway driving I averaged 10.3 L/100km, which is still very good for this class.

Practicalities in mind, the new Accord is a very accommodating car with ample space up front for large bodies and even more room for stretching out in back. The trunk is large at 439 litres, although while the rear seatback folds flat for longer items it doesn’t split.

The Accord Touring might be the most advanced car in its class for safety, however. The aforementioned rear camera is a multi-angle unit that not only protects the car from potential parking mishaps but is also like having eyes in the back and on the sides of the head for seeing children playing where they shouldn’t be, although my favourite new Honda-exclusive feature is LaneWatch blind spot display that projects a bright and clear right-side rearward image onto the infotainment screen when flicking the right turn signal, making for worry-free right turns and lane changes. The Accord Touring also features lane departure warning and forward collision warning along with the usual stability and traction control, four-wheel ABS-enhanced disc brakes, electronic brake-force distribution and brake assist, plus a full assortment of airbags. Accords like my Touring tester, with front crash protection, have proven their crash test mettle by earning 2014 IIHS Top Safety Pick honours, while the 2014 Accord sedan scores five stars in most of the NHTSA’s crash test categories.

To say this is the best Honda Accord yet is an understatement. The popular sedan made such progress from the 2012 to 2013 model year that it left many of its peers far behind, and the 2014 car, while unchanged, remains a solid bet for those looking to purchase a mid-size four-door. Pricing starts at $23,990 plus freight for the base LX model, whereas four-cylinder Touring trim can be had for $30,745.
©(Copyright Canadian Auto Press)
Car Shopping Tools