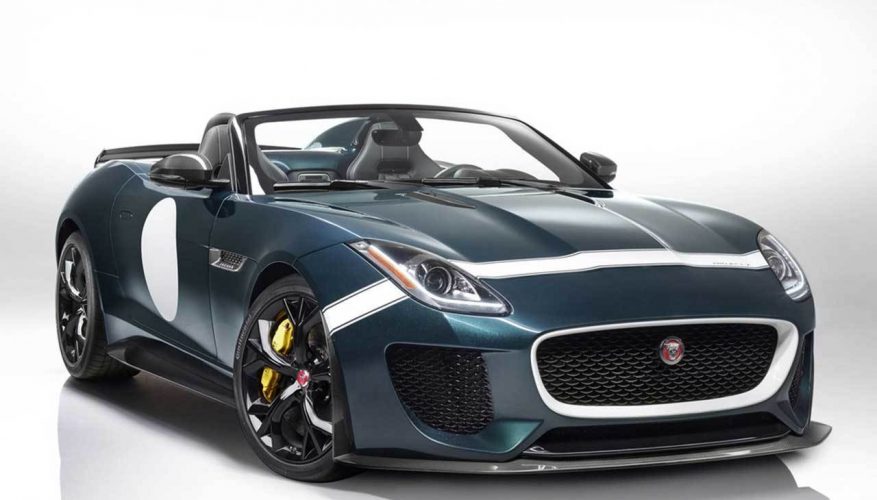 By: Trevor Hofmann
What sports car looks better than a Jaguar F-Type? That’s easy, the F-Type Project 7, and according to the British carmaker the classic D-Type racecar inspired drop-top concept will soon go into limited production.

Official news came at this year’s Goodwood Festival of Speed where the production version debuted, only a year after the original concept showed up for the 2013 Goodwood show. That prototype was a monoposto design, but the new production model will allow seating for two along with other road-ready upgrades, such as rollover hoops to protect both occupants in case of a crash. And don’t worry Canadian leaping cat fans, as a North American-spec version will also be available, although ours will be fitted with a full-height windshield to meet safety regulations.

Under the Project 7’s sleek hood resides a 575 horsepower version of Jaguar’s 5.0-litre supercharged V8, which, thanks to an efficient eight-speed Quickshift automatic and second-generation Electronic Active Differential, is good enough for a 3.9-second sprint to 100 km/h. The Project 7’s top speed has been limited to 300 km/h (186 mph).

Like the F-Type roadster the Project 7 is based on, the new model’s body is constructed of aluminum and is therefore relatively lightweight compared to steel-bodied competitors of the same size. The new Project 7 is actually 80 kilos (176 lbs) lighter than its donor car at 1,585 kg (3,495 lbs), and can be made lighter still by the removal of its folding fabric roof.

The Project 7’s Carbon Ceramic Matrix brakes are a lightweight design too, although their primary purpose is to repeatedly slow the roadster down at a rapid rate with minimal brake fade. Additionally, they will be utilized in the rear-wheel drive car’s torque vectoring system.

Also important in keeping the Project 7 glued to the road at high-speed are its advanced aerodynamic aids, such as its carbon-fibre air splitter up front, side aprons, adjustable rear spoiler and rear diffuser.

The timing of the Project 7’s launch was in no way coincidental, this being the 60th anniversary of the Jaguar D-Type that inspired the new model’s design. Even the Project 7 name pays homage to the D-Type, being the number of wins the classic racer achieved at the 24 Hours of Le Mans.

Jaguar has not yet announced a price for this special edition roadster, but expect it to be significantly less affordable than the F-Type that shares its undercarriage. After all, the Project 7 is a very limited edition supercar, with production set to just 250 examples.
©(Copyright Canadian Auto Press)
Car Shopping Tools