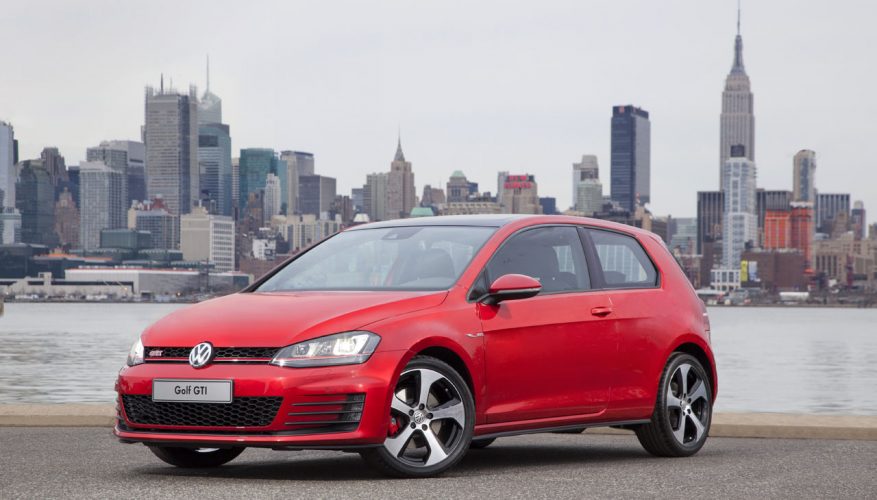 By: Lyndon Conrad Bell
While credited with inventing the concept of the “hot hatch”, the fact of the matter is several other manufacturers had done high-performance versions of their more pedestrian hatchback models before the 1976 Volkswagen GTI ever saw the light of day. However, because of its prowess, the Volkswagen GTI was the one that put the concept on the map.
Since that first version of the highly regarded VW, six iterations of the car have been offered, with the seventh just now coming to market.

As you’d expect, this new one is considerably more powerful than that first one, and a great deal more refined as well. While still hewing closely to its mission of providing outstanding performance potential in the guise of a prosaic family hatchback, this new GTI is the most sophisticated example of Volkswagen’s GTI ever offered.

Riding upon an all-new platform, the 2015 Golf GTI is longer, lower and wider than the 2014 car it replaces. The track is just a bit wider in the front, and the wheelbase is a couple of inches longer. Because of this, the “A” pillar sits back a bit farther on this version of the GTI, so the hood is longer and the roof is lower, giving the Mark VII car a slightly racier appearance than the Mark VI.

Power for the front-drive hatchback comes from a 2.0-litre version of the new Volkswagen EA888 turbocharged and direct injected inline four-cylinder engine, featuring variable valve timing. The powerplant develops 210 horsepower and 258 ft-lbs of torque from 1,500 rpm. Our test car was also fitted with VW’s optional GTI performance pack that will come later in the year, which adds 10 horsepower, larger brakes, and an electronically controlled limited-slip differential.

Among the new features of the engine is an integrated exhaust manifold. Rather than being attached to the engine block as a separate unit, VW now makes the exhaust part of the block. This enables the circulation of coolant around it, so the exhaust gases are cooled before they are routed through the turbocharger. This does a couple of things. For the turbocharger, it makes the intake denser so it produces more boost. This also heats the engine faster, thereby reducing emissions and improving fuel economy.

Fuel consumption in mind, the new GTI is rated at 9.4 L/100km in the city and 6.9 on the highway under the new five-cycle system, no matter which transmission is chosen. This is impressive for such a performance-oriented model.

Two transmissions are offered, a six-speed manual and a six-speed dual-clutch direct shift gearbox (DSG) with paddle shifters. We drove the DSG for our testing, and with it the engine POOFTS between gear changes like a Formula 1 car. Very exciting stuff, it made us want to wind the engine hard all the time just to hear it. Equally pleasing aurally is the engine’s exhaust note. This is partially due to Volkswagen’s incorporation of an active sound generator to enhance the soundtrack. While some might consider this “cheating”, it’s nice to know you can have all the pleasure of a rousing exhaust note without making a nuisance of yourself to people on the sidewalk as you “scream” past them.

The sound of the GTI is nicely reinforced by the nature of the car on the move. Demonstrating outstanding agility, the new GTI takes a firm set in the corners and stays planted solidly. With the limited slip differential, we could put power down sharply, with no concerns about torque steer whatsoever. In fact, if we didn’t know better we might have thought we were driving an all-wheel drive car.

Delivering excellent feedback, the GTI’s steering is one of the best electric systems we’ve ever encountered. Communicating effusively the goings-on at the tires’ contact patches, the VW’s steering feel keeps the driver totally informed. Enhancing this is its very quick turn-in, owing to a mere 2.1 turns lock to lock.

The brakes-firm and fade-free-exhibited no deterioration of their capabilities, even after a number of very vigorous passes over an especially challenging winding mountain road. How much of this is attributable to the bigger braking system fitted to our Performance package equipment is uncertain, but we can say it felt very good.

While both two-door and four-door body configurations are offered, regardless of the route you take, you’ll find comfort outstanding in VW’s latest performance hatch. Head-, leg-, and shoulder room are terrific in the front seats. The rear seats, as you might imagine, are a bit light on legroom (although better than the outgoing model’s), but if the people sitting up front are willing to be accommodating, two adults could ride in the back in relative comfort. Shoulder room has also been increased for rear passengers over that offered in the Mk.VI GTI.

Looking around the interior it is immediately apparent that this is the nicest GTI Volkswagen has ever offered. Offering premium levels of fit, finish, and materials, in addition to being a highly enjoyable car to drive, the Mk VII GTI is a very pleasant place to be.