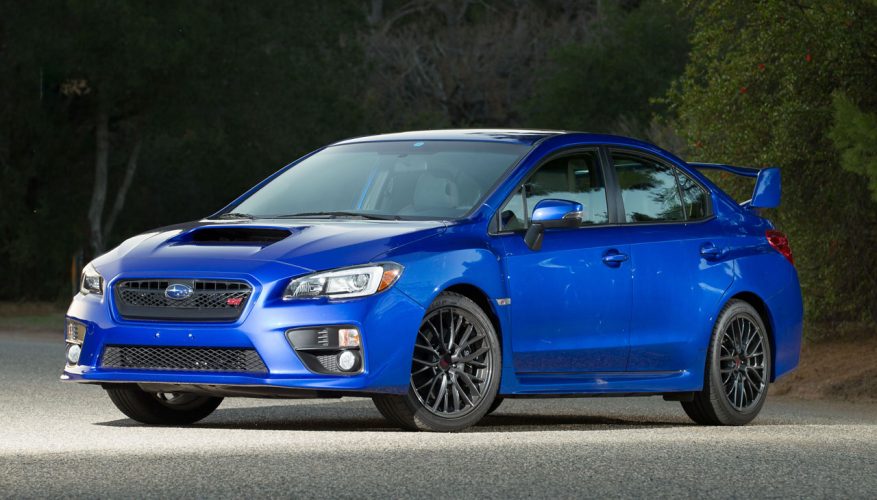 By: Lyndon Conrad Bell
While we’ve always been fans of the Subaru WRX STI, we’d also felt its true street potential had yet to be realized. The model is offered essentially in homage to the company’s championship-winning world rally cars. And, truth be told, if anyone deserves to have such a car on the road it is Subaru. Its rally cars are practically indomitable.

However, those first STI models we got back in 2004 were calibrated to perform as well as possible both on dirt and on pavement. Meanwhile, the Subaru’s chief rival, Mitsubishi’s Lancer Evolution was calibrated to deliver its best performances on pavement-and it showed. The Evolution’s reflexes were much sharper and considerably crisper than the STI’s. If you drove the two cars back to back (as we did back in 2004) you immediately saw the difference. And, if you were unaware of the Subaru’s rally heritage, you’d come away from the experience thinking the STI was soft by comparison-well, because it was.

Remember, the Subaru was calibrated to perform well both on dirt and on pavement, which by necessity entailed some compromises. Once the company’s engineering team saw how the Evo was thrashing the STI on the street, with each successive generation of the car, Subaru steadily dialed the extra compliance out of the STI. Without completely overhauling the car, they did what they could by stiffening the suspension system here and there, improving the steering feel, and just generally evolving the STI’s mechanicals toward making it a better performer on the street. With the debut of this mostly new 2015 Subaru WRX STI, they are finally all the way there.

This STI is easily the sharpest handling, most responsive STI model Subaru has ever offered, and it’s really, really, good. We called it mostly new because the 305 horsepower 2.5-litre horizontally opposed turbocharged four-cylinder engine and the six-speed manual gearbox are carried over from the previous generation of the car. The good news is these items worked brilliantly before, it was the rest of the car that needed fixing. Certainly it wasn’t short on power or torque, the latter peaking at 290 ft-lbs.

Completing the powertrain is an active torque vectoring version of Subaru’s all-wheel drive system, capable of braking the inside front wheel in a corner to improve turn-in. The system also employs a driver controlled centre differential to help improve stability on a variety of surfaces. It can be set to automatic allowing it to compensate for itself, and it can be manually locked into one of six preselected modes to optimize its capabilities for any given situation.

To improve handling, the STI’s springs, shocks, crossmembers, subframe bushings, front control-arm bushings and attachments are all stiffer. The handsome new body of the car is more rigid as well-owing to the employment of more high-tensile steel in the body structure, along with stiffening braces in various parts of the car. Additionally, the engine now rides on solid rubber mounts to keep movement to a minimum.

By the way, the hatchback STI has been laid to rest. With so many improvements needed, Subaru’s engineers focused all of their efforts on developing the best handling car they could. Doing two bodies would have required the consumption of too many resources to meet their deadline. For us, it’s just as well. We always preferred the look of the sedan anyway (though our hearts wouldn’t be broken if they offered higher trims without that big-ass rear wing).

While most don’t typically purchase the WRX STI version of Subaru’s Impreza for fuel economy, compared to many performance cars with anywhere near as much potential its very light on premium unleaded. Official Transport Canada numbers are 12.3 L/100km in the city and 8.6 on the highway as per the new five-cycle rating system.

Those put off by the WRX STI’s economy car interior will be made happier by the new 2015 model’s improvements. Subaru has upgraded materials quality and the overall look of the cabin comes near to premium levels, while there’s more room inside and a larger 340-litre trunk. Of course features are aplenty in STI trim, with all the expected powered accessories along with leather and suede-like alcantara sport seat surfaces, a standard colour multi-information display and an available 6.1-inch high-resolution touchscreen infotainment system accessing a nine-speaker Harman/Kardon audio system and navigation. There’s much more, but for the sake of space and time just know you won’t be wanting for extras if you spring for the top-line STI Sport-tech.

Long story short, every effort was expended to make this the best-handling Subaru WRX STI ever and it shows. Remarkably neutral, the STI corners with the best sports cars out there. It is infinitely tossable and easily catchable. The Subaru will allow you slice, dice and even julienne corners (OK, we’re lying about that last one, but you get the idea). Power delivery from the engine is outstanding, and the brakes are so resolute in their determination to retard progress they could easily run for U.S. Congress. If you’ve always liked the idea of the Subaru WRX STI, but found it a bit lacking on the street, rejoice-your prayers have been answered.