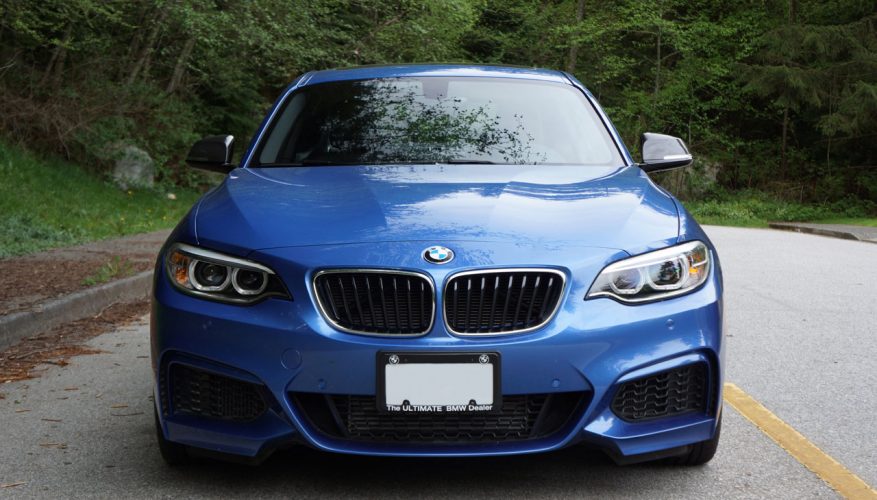 By: Trevor Hofmann
When is an M car not an M car? This is a question that will need to be answered when an all-new M2 arrives next year, as is expected, but a week spent with the M235i made me a believer in its M credibility just the same.

It’s odd really. I’ve driven most every M since the “M Motorsport” derived designation came into existence, except for the original M1 (oh how I would love to have the opportunity) and the original E30 M3 (I’m up for that too, if you happen to have one and would be willing to let me behind the wheel). Like the Euro-spec 1994 E36-based M3 (one of 50 that came to Canada) that still makes my heart palpitate rapidly at the very thought of its perfectly balanced, high-revving, melodious sounding inline sextet, the M235i is relatively lightweight and powered by BMW’s classic straight six. The new one even has a turbo like the first M3, while output comes closer to an absolutely wonderful black on black 1995 M5 I drove at the onset of my M love affair, at 322 horsepower and 332 lb-ft of torque.

In case you’re laughing off the M235i’s output as a mere playschool scooter in comparison to the upcoming 2015 M4’s 430 horsepower and 406 lb-ft of torque, consider that the M235i is a lightweight when measured up to the M4’s welterweight class. Even the outgoing M3 Coupe tips the scales at 1,680 kilograms compared to the M235i’s 1,590 kilos, despite the latter cars light (and gorgeous) carbon-fibre roof. That’s a difference of 90 kg, which might not look like much at first glance, but in actual fact makes a massive difference both off the line and in the corners. Don’t get me wrong, as the old M3 is a brilliant car in ever respect. So is the 1,990-kilo M5, and the 2,048-kg M6 Cabriolet for that matter, although while these super sleds can overcome the most serpentine of roadways at insanely fast speeds, they don’t feel as flickable and therefore aren’t as much fun as the little M235i.

Fun is what the little M235i is all about. It even looks fun. Sleeker and arguably more attractive than the outgoing M135i, the M235i still retains that car’s short and wide cheeky stance. While always ready for play, its reworked front fascia with ample cooling at centre and big side braking vents let you know its business time, while thickened side skirts pass by beautiful 18-inch twinned five-spoke alloys on meaty Michelin Pilot 225/40 front and 245/35 rear rubber before melding into a reshaped matte black diffuser-filled back bumper for a hind end that only needs a subtle decklid spoiler to cap off its defining purpose. Sure it’s fun, but it’s also saying the M235i is a serious sports coupe and you’d better be up to the task.

Then again, compared to the Ms of yore, the M235i is refined. Even when pushed harder than wise, it doesn’t bite you like older generation cars that didn’t include sport-tuned stability and traction control, amongst other go-fast driving aids. Still, the steering is wonderfully responsive for point-and-shoot driving, and lighter than any other M in the 2014 lineup, the suspension totally in control even when enduring undue hardship, yet hardly harsh as has been the criticism of some of its heftier siblings, the six-speed manual shifter sublime, clutch take-up perfect and engine response exhilarating, all-round delivering the kind of self-assured competence few rivals can match. I shy away from using words like magical to describe any car’s performance, but the M235i comes very close to supernatural behaviour.

The rest of the car is more of what we expect from a BMW, and by that I mean to say its interior is more upscale than the old 1 Series was. More soft-touch, pliable plastics make sure those upgrading from a mainstream brand’s top-line model won’t feel shortchanged, while the standard feature set is all most people will need or want. Of course most of the key accessories are powered, while the climate control system is automatic and dual-zone. Music lovers should like the stock stereo, as it’s a seven-speaker system with AM, FM, CD and MP3 capability, plus you can wirelessly stream music from your device via Bluetooth and then adjust everything with steering wheel-mounted audio controls. A manual tilt and telescoping steering wheel means that you’ll be able to find the ideal driving position, while the heatable leather upholstered front seats are powered with memory settings for the driver.

All the usual airbags are joined by an additional two for the driver’s and front passenger’s knees, taking care of passive safety, whereas active safety is enhanced by the aforementioned Automatic Stability Control + Traction, as well as Dynamic Brake Control, Electronic Brake Force Distribution, and Dynamic Stability Control.

The six-speed manual that I lauded earlier is also standard, while BMW has ditched the lovely dual-clutch seven-speed automated gearbox in favour of a new eight-speed automatic with paddle-shifters for those who want to experience more of an F1 experience. Before lambasting BMW for going the automatic route instead of retaining the dual-clutch system, it would be best to take one for a spin as the new eight-speed ZF autobox has been brilliant in other vehicles I’ve driven and therefore might be well up to the task of putting power down to the rear wheels of this little M car.

Both transmissions deliver reasonably good fuel economy, the manual rated at a Natural Resources Canada-claimed 11.2 L/100km in the city, 7.1 on the highway and 9.4 combined, and the automatic an even thriftier 10.0 city, 6.4 highway and 8.4 combined. These numbers are based on the outgoing two-cycle rating system, however, so we can expect a more realistic estimation for the next model year.

All in all the slightly larger and therefore more practical 2 Series Coupe makes an ideal basis for a respectable M car, and while we’re a ways away from stepping into a true M2, this M235i should by far be good enough for most peoples’ requirements. It’s light, quick, tossable and just downright fun, plus it looks fabulous, is beautifully finished and comes nicely kitted out. Truly, the only concern we have is that BMW will realize this and then crush our hopes and dreams (and expectations) by not delivering the real M2 into our market. Fingers crossed…

The 2014 BMW M235i Coupe starts at $45,000 plus freight. Options, including the $895 needed for my test car’s gorgeous Estoril Blue Metallic paint, can drive the price beyond $55k, but you’ll end up with a brilliantly balanced M-tuned sports coupe that’s still $20k shy of an M4 Coupe.
©(Copyright Canadian Auto Press)
Car Shopping Tools