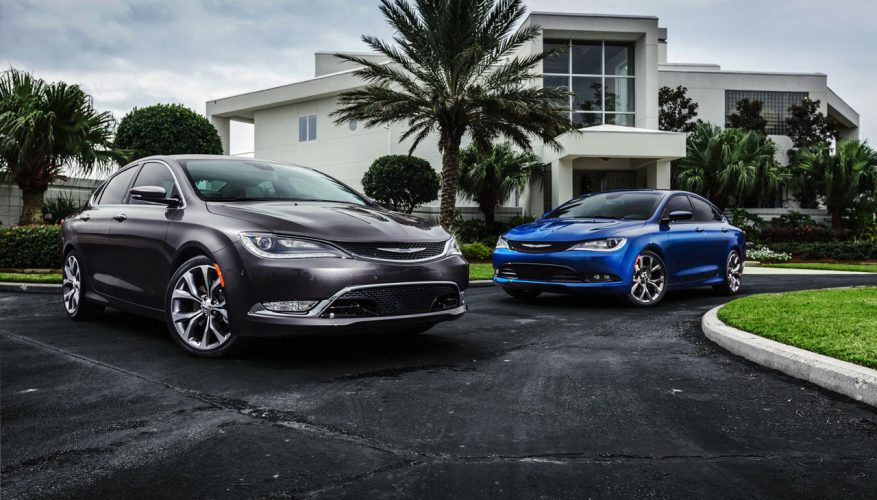 By: Lyndon Conrad Bell
If we’re lucky, this new Chrysler 200 will see rental fleet duty in much the same manner as its predecessor. This way, people will get an opportunity to experience just how good this sensuously shaped sedan really is. And hopefully, that will translate into sales for Chrysler as well.

Unquestionably the loveliest Chrysler model of the modern era-and quite possibly one of the best-looking of all time-the 2015 Chrysler 200 is sleek of line, enjoyable to drive, and boasts a delightful interior treatment. In other words, the new Chrysler 200 stands head and shoulders above the model it replaces in the storied automaker’s lineup.

Under the skin, the 2015 200 shares the Alfa Romeo Giuletta platform also underpinning the Dodge Dart and the new Jeep Cherokee. Power comes from a choice of either a 2.4-litre inline four-cylinder engine producing 184 horsepower and 173 ft-lbs of torque, or a 3.6-litre V6 producing 295 horsepower and 262 ft-lbs of torque. Both engines are paired with a nine-speed automatic transmission. All-wheel drive can be had with the V6, while the inline four only comes with front-drive. For added stability, the all-wheel drive system employs front to rear torque vectoring and a fully disconnecting rear differential.

We drove the 200 with both the four-cylinder and the V6 and found each engine to be more than up to the task of moving the new sedan. Drivers primarily concerned about fuel economy will find the four more than adequate as a power supply for the mid-sized sedan. It winds smoothly, delivers power in a very linear fashion, and is strongly up to the task of motivating the Chrysler.

The fact of the matter is if you never drive the V6, you’ll find the four quite acceptable power-wise. While the 200 isn’t particularly fast, the engine is more than competent at fulfilling its assignment. Generating more than enough pull to make merging into fast-moving highway traffic a breeze, the four does everything most people will ever need it to do. Yes, it could be a bit smoother at high revs, but it works.

As good as it is though, once you’ve driven the V6 the four starts feeling a bit soft in comparison. With more than enough power for any situation you’ll encounter, sluggish and this engine ain’t on speaking terms at all. Plus, the nine-speed automatic transmission helps it return decent fuel economy.

If you’re more of a performance-oriented driver, but you also appreciate a comfortable car, you will most likely be happiest pairing the V6 with the optional S package. The 2015 Chrysler 200S offers a nice compromise between all out performance and comfort. Yes, there are a number of sport sedans out there capable of outrunning it, but if you’re looking for a nice dose of style, a handsome, well-equipped interior, and a good measure of driving enjoyment, all at a reasonable price, the 2015 Chrysler 200S may well be what you’re after.

You’ll also find rich cloth upholstery, a 60/40 split folding rear seat, steering wheel-mounted controls for the audio system, and cruise control, as well as an electronic vehicle information centre. Additionally there are two 12-volt power outlets, power windows, mirrors, and door locks. Enhancing the warmth of the environment is interior LED ambient lighting. Rounding things out is Chrysler’s Uconnect telematics system, which is supported by a four-speaker audio system with an auxiliary audio input port and a USB port.

Optional offerings include one-touch power windows, heated front seats, dual-zone automatic climate control, heat and A/C outlets in the rear centre console, Bluetooth audio streaming and telephony, and six speakers for the audio system. On the sporty side of the ledger, the 200S comes fitted with dual exhaust tips, heated folding exterior mirrors, a power adjustable driver’s seat, a leather wrap for the steering wheel, and paddle shifters for the automatic transmission. The 200S also gets a sport suspension system, a sport shift algorithm for the automatic transmission, and 18-inch alloys.

If you’re more into luxury than sport, opting for the 200C will get you leather upholstery for the seats, power adjustable driver and front passenger seats, remote start, an auto-dimming rearview mirror, illuminated door handles and footwells, and illuminated vanity mirrors in the sun visors.

All in all, the new Chrysler 200 is light years better than the car it replaces. Handsome exterior styling, very pleasant interior treatments, and a broad range of equipment choices make the Chrysler 200 a very good choice in the highly competitive mid-sized sedan category. For the 2015 model year, Chrysler 200 pricing starts at $22,495 plus freight.
©(Copyright Canadian Auto Press)
Car Shopping Tools