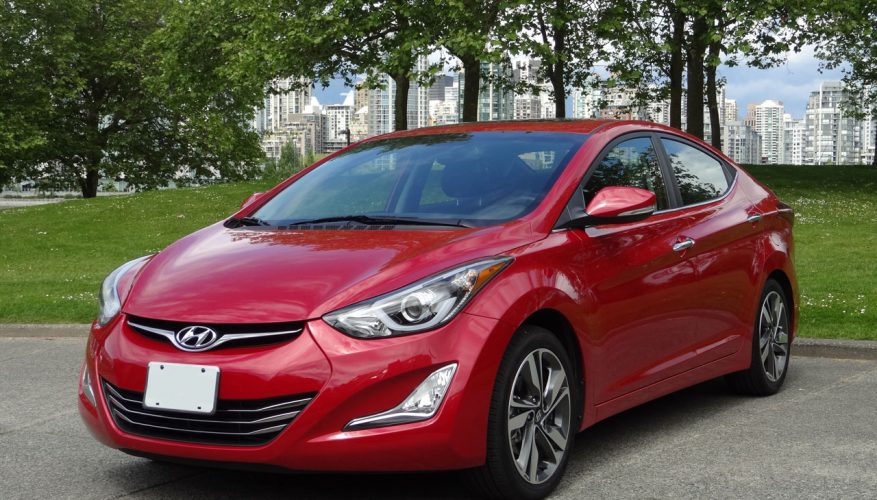 By: Simon Hill
Hyundai’s current-generation Elantra was introduced for the 2011 model year and has been a solid top-three seller in Canada’s compact market ever since thanks to a well-rounded personality that combines good looks, a pleasant driving experience, decent fuel economy, and plenty of available equipment for the money.

Now, three years into its production run and with only a year or two to go before a rumoured redesign under the styling direction of Peter Schreyer, Hyundai has given the Elantra a bit of a mid-life refresh to ensure it remains competitive with rivals including the Honda Civic, Toyota Corolla, Mazda3, Chevrolet Cruze and Ford Focus.

Outside, the updates are subtle but they help keep the Elantra contemporary looking. At the front there are restyled fog lights (for GLS and higher trim) housed in a slightly tweaked fascia, at the back there’s a mildly different rear diffuser, at the corners different alloy wheel designs, and on Limited trim cars there are now stylish LED character lights front and rear.

Inside, the changes are similarly subtle but they have more impact. The climate controls have been redesigned, and I found them far more intuitive and logical than earlier versions. Additionally, the central dash vents have been raised up some, which makes them more effective. The centre armrest is also slightly higher and therefore more comfortable. And the audio and navigation graphics have been tweaked for improved design and functionality.

Hyundai has also added all sorts of new sound and vibration dampening materials to the floor and dashboard areas, and installed new sound absorption materials in the climate control ducting. Again, these changes are subtle (the Elantra wasn’t obnoxiously noisy to begin with), but they do add up to an increased level of refinement.

The biggest revision for 2014 is the addition of a new, more powerful engine, and this is indeed a welcome upgrade. When I first tested the fifth-generation Elantra I commented that "the 1.8-litre, DOHC four-cylinder engine makes decent power once the revs build up (148 horsepower and 131 lb-ft of torque), but is quite raspy when pushed hard and doesn’t generate a lot oomph down low. With my test car’s optional automatic transmission the result was that it felt of sluggish off the line." For 2014, that’s changed thanks to a new 2.0-litre direct-injected four-cylinder powerplant that makes 173 horsepower and 154 lb-ft of torque.

At least, it’s changed if you ante up for the Limited trim – L, GL and GLS trims make do with the old 1.8-litre engine (Elantra Coupes, by contrast, all get the new engine). The 2.0-litre engine isn’t exactly transformative, but it does add an effective dose of low-end grunt, making the Elantra Limited noticeably more responsive around town and when passing. It also nips about two seconds off the 0-100 km/h run, getting there in just under eight seconds compared to almost 10 seconds with the smaller engine.

Transmission choices with the 1.8-litre engine include a standard-equipment six-speed manual or an optional six-speed automatic, while the 2.0-litre Limited models come only with the automatic. One feature that’s not available is paddle-shifters: those wanting to take control of the gear changes will have to content themselves with the console-mounted shift lever.

These changes aside, the Elantra remains the same car it always was, with the same long list of positive attributes that Canadians have come to appreciate, and the same couple of niggling negative issues as well.

The niggling negatives include somewhat numb steering, although to its credit Hyundai has improved the steering feel over the years and for 2014 has added its selectable steering mode to the Elantra sedan, allowing the driver to choose between Normal, Sport and Comfort modes at the push of a steering wheel-mounted button (Sport mode gives the steering more weight, and Comfort gives it more power assist).

The outward sightlines in the Elantra are also worse to my eye than average. The so-so rearward visibility is mostly forgivable – after all, the Elantra is hardly alone in sacrificing rearward visibility in its quest for aerodynamics and style, and there’s a rearview camera in GLS and higher trims. I do think, however, that the Elantra could do a lot better when it comes to forward visibility: It has some of the most obstructive A-pillars in the segment, something I hope Hyundai addresses in the next-generation Elantra.

As noted, the balance of the Elantra’s ledger is positive: The interior materials, including a soft-top dashboard, are good-looking enough to appear right at home next to my Limited test car’s leather upholstery. The interior is spacious for the car’s overall size, with a generous 420-litre trunk and enough room in the back seat that at five-foot-eleven I can comfortably sit "behind myself" with the driver’s seat set to my satisfaction.

Back in the driver’s seat, the Elantra is relaxed and unobtrusive in everyday driving, with a ride that’s comfortable on rough city roads while still responsive enough to keep the driver engaged on smoothly twisting tarmac.

Lastly, and this certainly plays a large part in the Elantra’s success, it offers an impressive level of equipment for the segment, without breaking the bank. At a starting price of $17,594 (including the $1,595 destination fee) the base L model includes all the necessities such as power locks and windows, heated power mirrors, tilt and telescoping wheel, 60/40 split folding rear seatbacks, trip computer, and a six-speaker AM/FM/CD/MP3 audio system with iPod and USB jacks (these are conveniently located in a decent-sized closable bin at the bottom of the centre stack). The base Elantra also gets a full range of safety features including traction and stability control, four wheel ABS disc brakes, six airbags, and construction solid enough to earn a 2014 IIHS Top Safety Pick award.

The Limited goes for $25,244 including destination and gets the 2.0-litre engine with the automatic transmission, plus 17-inch alloy wheels, leather upholstery, a power adjustable driver’s seat, dual-zone automatic air conditioning, auto-dimming rearview mirror with an integrated HomeLink garage door opener, projection headlights with front and rear LED accent lighting, solar glass, and more. My top-of-the-line Limited with Navigation test car carried an MSRP of $27,244 including destination and had all of the aforementioned items plus a navigation system with a seven-inch touchscreen, upgraded 360-watt audio, plus smart key with proximity entry and pushbutton start. To further sweeten the deal, Hyundai was offering no haggle price adjustments at the time of writing of $2,000 on Limited models and $1,500 on all other models except the base L trim.

In a segment chock full of worthy contenders the 2014 Hyundai Elantra continues to offer a compelling blend of style, features and value, and with its available new 2.0-litre engine upgrade it can add "performance" to that list as well. All in all, it makes Hyundai’s popular sedan well worth checking out if you’re in the market for compact car.