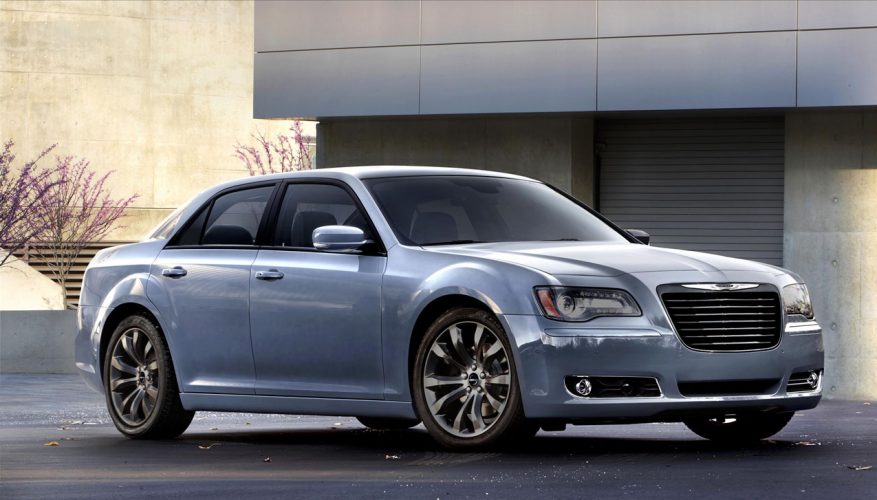 By: Lyndon Conrad Bell
If cars celebrated throwback Thursdays, the Chrysler 300C would easily be the poster child. Strongly reminiscent of the good old days of large, powerful, rear-drive family sedans, the contemporary Chrysler 300C keeps its rearview mirror focused on the past even while all four of its wheels are firmly rooted in the present.

Thoroughly capable of ruling the highway in much the same way as those large and proud sedans from the 1950s and 60s, the 2014 Chrysler 300C also employs cutting edge technology to achieve better than average fuel economy, while keeping its passengers both informed and entertained. What’s more, the platform is so versatile that Chrysler can offer sport, luxury, and extremely high performance variants of the same car.

While the 300C now comes standard with the V6, the optional 5.7-litre HEMI V8 in our upgraded 300C tester produces 363 horsepower and 394 ft-lbs of torque. We drove the rear drive version of the car, but all-wheel drive is available as well. Rather than the eight-speed however, Chrysler’s five-speed automatic transmission comes with the 5.7-litre. Fuel economy is maximized through the employment of Chrysler’s multi-displacement fuel saver technology, which shuts down four of the eight cylinders under light loads. Fuel economy is rated at 14.1 L/100km in the city and 7.8 on the highway with rear-drive and 13.5 city and 8.0 highway with all-wheel drive, while the U.S. EPA estimates 14.7 city and 9.4 highway with rear-drive or 19.6 city and 10.2 highway with all-wheel drive.

If you’re the kind inclined toward V-max, the 300 SRT’s 6.4-litre V8 brings 470 horsepower and 470 ft-lbs of torque. A rear-drive proposition only, the SRT uses a five-speed automatic transmission as well. The EPA says you can expect the equivalent of 16.8 L/100km in the city and 10.2 on the highway, a far cry more realistic than Transport Canada’s 15.0 city and 8.7 highway rating. Here’s the real kicker though-all three engines make their maximum power output on regular unleaded fuel.

The 300C’s standard features include eighteen–inch wheels (nineteen on AWD models while 20s are available for both), Nappa leather seats (eight-way powered, heated and ventilated up front), a heated wood- and leather-wrapped steering wheel attached to a powered tilt and telescopic column, a touchscreen interface for secondary functions, a back-up camera, and passive keyless entry with pushbutton ignition. Bluetooth phone connectivity with audio streaming and a dual-zone automatic climate control system are included as well.

As nice as all of that is, it’s the look of the car that sets the 2014 Chrysler 300C apart. While the squared off lines of the 2005 300C were softened a couple of years ago in the redesign, the long hood hinting at the model’s powerful engines and the short rear deck emphasizing its rear wheel drive powertrain were retained. A blast from the past, the sedan’s roof harkens back to the “chopped and channeled” hot rods from the 1950s and 60s. Taken all together, the look is unique, dynamic, and highly evocative. And frankly, so is the driving experience.

Out on the highway, if you give it the beans the 5.7-litre V8 in our test car was more than capable of attracting the attention of the Mounties. You need to make sure you’re driving the Chrysler and not letting it drive you. Deceptively fast because it’s so smooth and quiet, if you’re not paying close attention you’ll be well into illegal before you realize it. This is ably assisted by the suspension system, which routinely absorbs pavement imperfections without making a big deal of the fact it’s working so hard on your behalf.

However, that same suspension system will haul the big Chrysler through corners with the aplomb of any highly regarded sport sedan you can name. You’ll be positively amazed at the way the 300C seems to diminish in size to accommodate the situation. Rapid changes of direction are accomplished with ease, and the braking system readily burns off speed again and again with no hint of fade or fatigue.

To duplicate the Chrysler’s prowess in anything European, you’ll find yourself waving bye-bye to a considerably larger slice of your income stream. In fact, there simply aren’t many other rear-drive V8-powered sedans out there at anywhere near the Chrysler 300C’s price point. When you also consider the Chrysler’s handsome styling, luxurious interior, and engaging driving experience the 2014 300C is a pretty tough proposition to ignore.