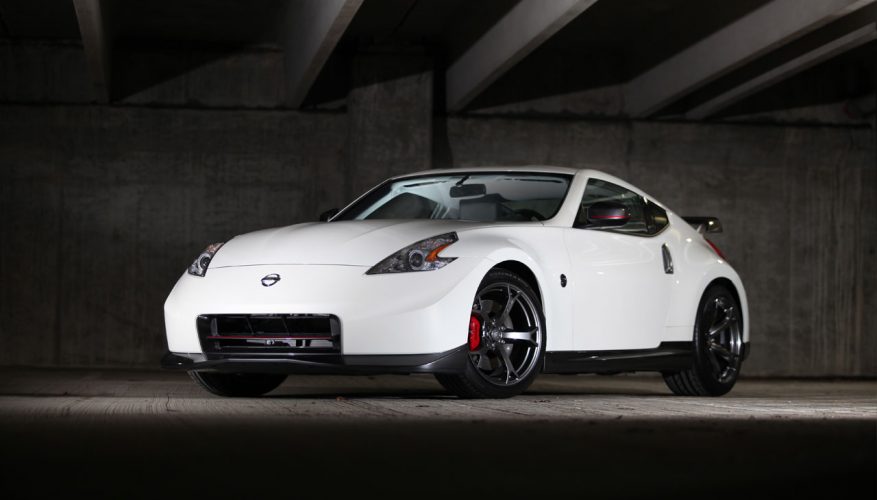 By: Lyndon Conrad Bell
When approaching the 2014 Nissan 370Z Nismo it is useful to keep in mind that this is the most extreme example of the current Z car you can buy from an authorized Nissan dealer. It is also useful to keep in mind that this version of the Z is intended primarily for track days, auto crossing, and time attack. If you like the 370Z, but want one primarily as a daily driver you might do well to look a bit farther down the 370Z food chain. Why the admonition?

Because comfort ain’t one of the items in this car’s mission statement and you need to know comfort ain’t at all what the Nismo Z is meant to be about. The 2014 Nissan 370Z Nismo is tuned to deliver outstanding handling over ride comfort-with no apologies whatsoever. To accomplish this, the Nismo suspension modifications include higher spring and stabilizer bar rates, increased roll stiffness, and stiffer front and rear shocks. The suspension system also gets a set of very light 19-inch forged aluminum alloy wheels, staggered in width from front to rear, along with low profile high performance tires. Because of this more robust setup, you will feel every bump, undulation, and pavement irregularity the Nismo Z encounters.

However, if you decide to ignore that aspect of the Nismo Z’s nature and just drive it, you will have more fun than you ever thought possible behind the wheel of a car. Screaming down a straight, getting hard on the brakes, and flinging the Nismo Z into a corner is one of the most satisfying things you will ever do behind the wheel of a sports car. The steering is delightfully communicative, the seats hold you in place as advertised, and the whole thing just flat works well. Astonishingly, while the car reacts harshly to anything other than billiard table smooth pavement, bumps and jostles do not upset the car’s equilibrium. In other words, everything untoward the suspension system encounters will be announced vigorously, but the car will continue along its intended path-wholly undisturbed. It’s as if the Nismo Z says; “Yeah, that was a serious bump! Don’t worry though-I got it. Now come on, let’s go faster.” And on it continues, directional stability wholly undisturbed. Regardless of what’s happening down at the wheels, when you ask the Nismo Z to bite, the car bites-hard. Once you learn how much bandwidth the Z offers in terms of its dynamic capabilities, you will feel practically invincible in nearly every cornering situation.

Motivating the 2014 Nissan 370Z Nismo is a 350-horsepower version of Nissan’s highly vaunted VQ series 3.7-litre V6 engine; one capable of delivering 276 ft-lbs of torque. Responsible for the 18 horsepower and 6 lb-ft advantage over the engine fitted to standard Z cars are a revised variable valve timing setup, an optimized engine control module, and a specially configured exhaust system.

A six-speed manual is the only transmission offered, and is fitted with Nissan’s SynchroRev Match synchronized downshift rev-matching system. This automatically adjusts engine speed when shifting to a lower gear-"blipping" the throttle the way an experienced driver would do to smooth downshifts. If you prefer to heel and toe your way to your own rev-matched downshifts, SynchroRev Match can be switched off.

Advertising its capabilities, the most prominent aspect of the 370Z Nismo’s appearance is the extended nose design adopted for the 2014 model year. Featuring hard creased edges and a deep chin spoiler, the new nose makes the Nismo Z just over six inches longer than the standard 370Z coupe.

The Nissan’s side skirts and rear bumper have also been reworked to improve the flow of air beneath and around the Z to help it hold the road better. Additionally, a huge rear wing adorns the Nismo Z. More than a styling element, it comes into play at the high speeds this car is designed to achieve.

Cosmetic touches include a grey accent added to the car’s grille with a red stripe for trim. The side sills are finished in the same shade of grey, as is the rear spoiler. In combination with the pearlescent white paint of our test car, the overall effect was quite handsome.

The racy theme continues inside the car with deeply bolstered sport seats upholstered in black and red fabric with red stitching. However, the electrical adjustments found in other Z-cars are eschewed in favour of shedding weight.

The sportiest variant of the already very sporting-oriented 370Z, and outfitted primarily to serve as an outstanding platform for track pursuits, the Nismo Z answers the question, “What if…”

Pricing starts at $43,020 plus destination, but here’s the bad news… you’ll need to pay U.S. dollars, not Canadian. Unfortunately Nissan Canada dropped the 370Z Nismo at the end of the 2012 model year, only carrying the 370Z Touring model for 2013 and 2014. Odd, yes, that you can still pick up a 2014 Juke Nismo in three different variations including the top-line Juke Nismo RS, but the brand’s most legendary sports coupe only comes in more sedate Touring trim.