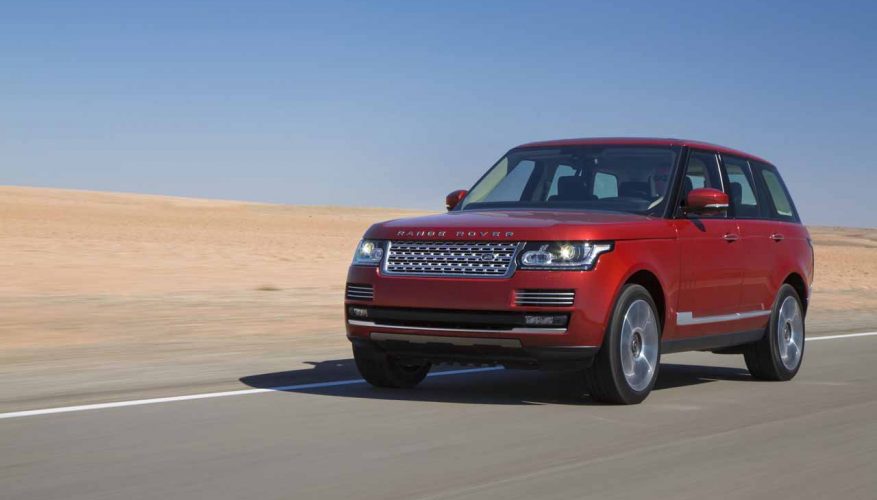 By: Lyndon Conrad Bell
For most Land Rover Range Rover owners, the philosophy seems to be it’s better to have and not need than need and not have. While that’s sound advice for most situations, when it comes to the exceptionally broad and deep portfolio of capabilities possessed by what is arguably the world’s most capable luxury SUV-well, let’s just say young Cody will never have to worry about getting stuck in the middle of a raging stream on his way to soccer practice. Like that’s ever gonna happen…

Of course, anyone who’s lived in a market-driven society for any amount of time knows these things are much more about appearances than actual needs, and when it comes to appearances the only British vehicle with more presence than a Range Rover is a Rolls-Royce. There’s no question about it, when you show up in a Range Rover it really does say you’ve arrived. Here’s the thing, though, this can happen pretty much any place you want it to be. There really aren’t very many places on Earth a Range Rover can’t go.

Freshly redesigned for the 2013 model year with an all-new aluminum monocoque, the contemporary Range Rover is lighter than ever. This improves both its performance on the road and its fuel economy. For the 2014 model year, another newfound set of efficiencies has been realized, thanks to the adoption of a supercharged V6 engine. Boasting some 340 horsepower and 332 ft-lbs of torque, the new Range Rover engine is as powerful as it is thrifty. Displacing 3.0 litres and tied to an eight-speed automatic transmission, the V6 is capable of returning a U.S. EPA-rated (and metric-converted) 13.8 L/100km in the city, 10.2 on the highway, and 12.4 combined.

We found it to be exceptionally smooth, highly tractable, and we enjoyed the sound of the new engine as well. In our experience, the V6 provides far more power than most people will ever need. Of course, there are those for whom enough is never enough, so there is also a 510-horsepower 461-ft-lb supercharged 5.0-litre V8 on offer to power the Land Rover flagship. If that won’t get you where you want to be, nothing will.

Piloting a Range Rover, whether gliding down a city street or ambling along an extremely rugged trail, you get a strong feeling of confidence. In the wild, there are very few situations a well-driven Range Rover won’t negotiate to its benefit.  Meanwhile, on pavement, the Range Rover is uncannily quiet and smooth. Thing is, rather than isolate you from what’s going on at the road surface, the Range Rover insulates you. What’s the difference?

While you can tell what’s going on down there (the Range Rover dutifully informs you of its goings on) nothing untoward is transmitted to your seat. In other words, you have situational awareness, but you aren’t expected to deal with the details-they’re handled for you. The Rover absorbs all the punishment while you glide along, above it all, ensconced in a protective cocoon of comfort.

Speaking of comfort, this is something the Land Rover Range Rover delivers in great heaping helpings. First Class barely begins to describe the accommodations you’ll find in the Range Rover’s passenger compartment. Sumptuous materials, exceptionally supportive seats, resolute craftsmanship, a beautiful design, and a wealth of the latest tech all combine to create a very special place.

Naturally, keyless entry and start are included, along with a tri-zone automatic climate control system, eight-way power adjustments for the front seats, manually reclining rear seats, and driver memory settings for seat position, audio system setup, and mirror positioning. Rounding out this broad array of standard features is an eight-inch touchscreen interface with voice control for most infotainment functions, including navigation. Bluetooth phone and audio streaming support a 13-speaker Meridian audio system with USB, iPod, and auxiliary audio input ports, along with both satellite and high definition radio.

That’s just a partial list of the standard comfort and convenience features; the options get even more lavish. How does self-parking and rear seats with heating, ventilation, power recline and power lumbar adjustment sound?