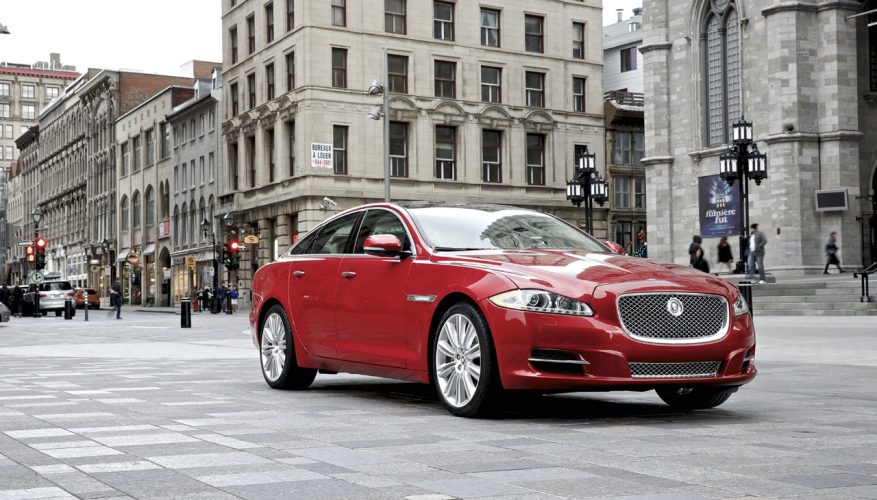 By: Lyndon Conrad Bell
In this class of car, exclusivity is one of the idealized attributes, and in this regard none of its competitors can claim more exclusivity than the Jaguar XJ. While the Mercedes S Class and the BMW 7 Series routinely rank among the best selling cars in this class, the big Jaguar finds relatively few takers each year. It’s too bad too, because the Jaguar XJ is arguably the most distinctive car in its competitive set.

First of all, nothing else looks like the Jaguar, and its styling is such that it will only get better looking over time. And now, with the addition of a standard all-wheel drive powertrain, owners can take full advantage of the car on a year round basis.

Another new development for the flagship Jaguar was the replacement of its base V8 engine with a supercharged V6 powerplant for the 2013 model year. Producing 340 horsepower and 332 ft-lbs of torque from 3.0 litres, the engine delivers an enticing blend of determined performance and commendable fuel economy. The engine’s power delivery is so good you’d be hard pressed to peg it as a V6. On the move it puts one more in mind of a well-tuned V8.

Our all-wheel drive 3.0-litre long-wheelbase test car used an eight-speed automatic transmission and Jaguar’s intelligent start/stop function (which shuts the engine down at traffic signals etc.) to return a U.S. EPA-rated (and metric-converted) 14.7 L/100km in the city, 9.8 on the highway, and 12.4 combined. For a car of this size, and with this much performance potential, these numbers are quite remarkable. This is owed in part to the employment of a high compression ratio, direct fuel injection, and independently variable cam timing.

Also contributing to the XJL’s fuel economy and dynamic capabilities is its lightweight aluminum body. Even with all of the luxury gear the car carries, on the road it feels very light on its feet and highly responsive. Wonderfully dual-natured, the XJL Portfolio is quietly reserved when you need it to be and raucously good fun when you want it to be. Set the transmission to Sport, activate the high performance mode with the checkered flag button on the centre console, and the staid luxury limousine is instantaneously transformed into a sport sedan of the first order.

Acceleration becomes sharper, the transmission shifts with more alacrity, and the steering becomes livelier. The next thing you know, the Jaguar is covering ground more quickly than you ever expected a car of its size and stature to be capable of. Supporting this is the standard Jaguar Instinctive All-Wheel Drive system.

Calibrated to deliver 70 percent of its output to the rear wheels in normal situations, it is also capable of dividing torque evenly between the front and rear wheels to mitigate wheel slip. Further, the system is integrated with the Jaguar’s dynamic stability control and ABS systems. This means the all-wheel drive XJ is capable of apportioning torque from side to side as well as braking individual wheels to maintain steadiness. As you might expect, the Jaguar’s handling benefits mightily from the increased traction the system provides.

On the luxury front, acquiring the Jaguar flagship garners one a host of rewards, among them an adaptive suspension system with self-leveling capability, a panoramic sunroof with retractable sunshades, and keyless entry with pushbutton start. Other luxurious touches include soft-close doors, a dual-zone automatic climate control system, and heated rear seats.

The Portfolio trim package, standard with the XJL, includes soft grain leather upholstery, ventilation and 12-way adjustability to the front seats, plus memory settings. Additionally, a heated leather-wrapped steering wheel sits overtop a background of burl walnut veneer. There is also a simulated suede headliner, worktables in the front seatbacks, rear vanity mirrors, and sunshades in the doors for rear passengers.

An eight-inch touchscreen system provides the user interface for all multimedia features. It also permits interactivity with the navigation system. There is Bluetooth phone connectivity and audio streaming, as well as voice activation for most features, and a 14-speaker Meridian audio system. This supports a CD player, satellite and HD radio receivers, a hard disc drive digital music storage solution, and a USB input port.

Ask around, and most people will tell you Jaguar cars have a tendency to be unreliable. However, perception has a tendency to lag reality by about ten years. Under Ford ownership the demons were exorcised from Jaguar’s cars, but people have yet to recognize this. This, no doubt, contributes to the exclusivity we spoke of at the beginning of this review.

Whatever the reason, today’s Jaguar XJL is a beautifully turned out car with a wealth of tastefully executed appointments. From where we’re sitting, the fact that few others have one is a yet another point in its favour.