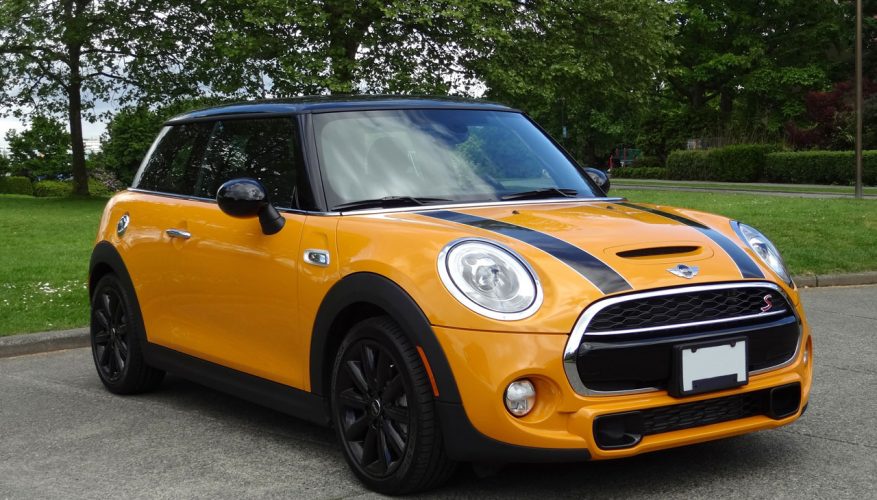 By: Simon Hill
Whether you’re talking about the original 1960s Mini or today’s rebooted Mini brand, the model that started it all is the iconic two-door hardtop. For 2014 the modern-day Mini Cooper Hardtop has undergone a ground-up redesign, and while it may look strikingly similar to the first reborn Mini of 2001 it’s actually the third generation of the diminutive little four-seater.

The good news is that Mini hasn’t spoiled the formula: In Cooper S trim the Hardtop remains an absolute blast to drive, with a responsive engine, impressively agile suspension and lively personality. It gets better, too, because Mini has managed to make the latest version both a little bit more powerful and a little bit more efficient thanks to a pair of all-new engines that will be shared with parent company BMW.

Like many of us, however, the new Mini has expanded a little as it has matured. The third-generation car has grown in every dimension compared to the previous version, gaining 114 mm of length, 43 mm of width, 25 mm of height, 28 mm of wheelbase, 43 mm of front track, 33 mm of rear track, and approximately 35 kg of weight depending on the model (it now weighs in at 1,182 kg for the Cooper and 1,252 kg for the manual-equipped Cooper S, versus 1,150 and 1,210 for the equivalent 2013 models). Perhaps that’s why its restyled and significantly more prominent front end looks vaguely horrified – it caught a glance in the mirror and thought "Yikes!"

The official word is that the lengthened front end provides better protection for pedestrians in the event of a crosswalk mishap, and I suppose to the extent that Mini’s designers have hidden a pillow in the car’s nose they’ve done a remarkably good job. Helping balance the longer nose are larger headlights encircled with "angel eye" style headlight rings (a distinctly BMW touch that Mini first debuted on the Rocketman Concept) and the taillights are bigger too.

Apart from pedestrian safety, the other good news associated with the Mini Cooper Hardtop’s increased size is that the new car is more accommodating inside than ever before, with more rear legroom, more rear shoulder room, and more luggage space (and if that’s not enough for you, there’s a new Mini Cooper 5-Door coming for 2015, which is basically a Hardtop with a pair of rear doors, although I’d have thought Mini might have called that car the Mini Cooper Maxi Hardtop or something equally cheeky).

At 5-foot-11-inches tall I found the front seats in my Volcanic Orange test car to be thoroughly comfortable, and the overall look and feel of the interior retains most of the traditional Mini charm, but with better quality materials. There are cloth-wrapped A-pillars, soft-skinned door uppers, a soft-top dash, and a soft-touch knee pad under dash, too.

As has been widely reported, the traditional big central speedometer is gone, its space now filled with the infotainment display and controls. I’ll admit to being a little saddened by this, but I can see how it makes sense from a practical point of view, and Mini softens the blow by providing a big red toggle switch at the base of the centre stack to start and stop the car. What could be better than a car you start using a big red toggle switch?

Most of the infotainment interface duties are handled using a big rotating knob that’s much like BMW’s iDrive controller, though I found I needed to flip up the overly tall central armrest in order to use this comfortably. There are a whole lot of submenus and customization options available through this interface, and the truth is that even a week in the car wasn’t enough for me to either entirely figure out the user interface or fully explore all the available features.

Further softening the loss of the central speedometer, the round infotainment display is ringed with "Excitement Lights" that provide a glowing approximation of a speedometer, at least some of the time. When you adjust the cabin temperature or audio volume they change colour and provide an approximation of the selected temperature or volume instead, and depending on the driving mode they can also imitate a tachometer rather than a speedometer. I found them more distracting than actually informative, but they are amusingly distracting and I think that’s the whole point.

Actually that’s not quite correct, because really the whole point of the Mini Cooper S is driving enjoyment, and in that department the new car succeeds on all counts. The turbocharged 2.0-litre engine has plenty of grunt even at low revs, and it winds out with enthusiasm. In Sport mode the exhaust pops and burbles on the overrun, just like previous Cooper S models. The manual six-speed transmission is absolutely brilliant, quite possibly the best-shifting manual transmission I’ve ever driven, with easy and precise snickety-snick gear action and a light, quick clutch.

The steering is direct and responsive, and the handling (cue the cliché) is properly go-kart like, while managing to be a bit more composed than the previous generation Mini. With its 205/45R17 tires the Cooper S sticks pretty much like glue, and it demonstrates pleasantly neutral handling. Being a front-wheel drive car its natural tendency is to lean towards understeer as you near the limits, but you can provoke it into oversteer if that’s your thing. The ride, while reasonably compliant, is certainly on the firm side, however, and there’s a fair bit of tire noise at highway speeds.

If you’re in the mood to save fuel – though I have to admit that the bubbly personality of the Cooper S rather promotes the opposite – then you can switch the car into "Green" driving mode, which dulls the throttle response and, in the manual-equipped car, puts up the little digital shift requests earlier (in the automatic it’ll just shift earlier for you). There’s also an automatic engine start/stop system for improved efficiency while waiting at traffic lights. When you’re feeling more energetic, there are the Normal and Sport driving modes.

It’s not clear which mode is used for the official fuel economy testing (I’d guess the Normal mode), but at any rate the Mini Cooper S posts up official city / highway economy ratings of 8.1 / 5.2 L/100km. In mostly city driving I managed just barely over 10 L/100km during my week with the car (not far off the upcoming new five-cycle city rating of 9.4 L/100km) and that was while driving with the sort of joyful, smile-inducing verve that would slurp back half again as much fuel in most other sporty cars.

Saving the best for the last, the new, roomier, more powerful and more composed Mini Cooper Hardtop is substantially less expensive then the previous-generation, clocking in roughly $5,000 cheaper than equivalently-equipped models from last year. The base Cooper Hardtop starts at $22,645 including the $1,655 destination fee, and the Cooper S starts at $27,145 destination in, although in true Mini tradition there are hundreds of available customization options that will allow you to add thousands of dollars to the final price. Still, considering how much fun this car is, it’s impressively good value and one more reason to smile.
©(Copyright Canadian Auto Press)
Car Shopping Tools