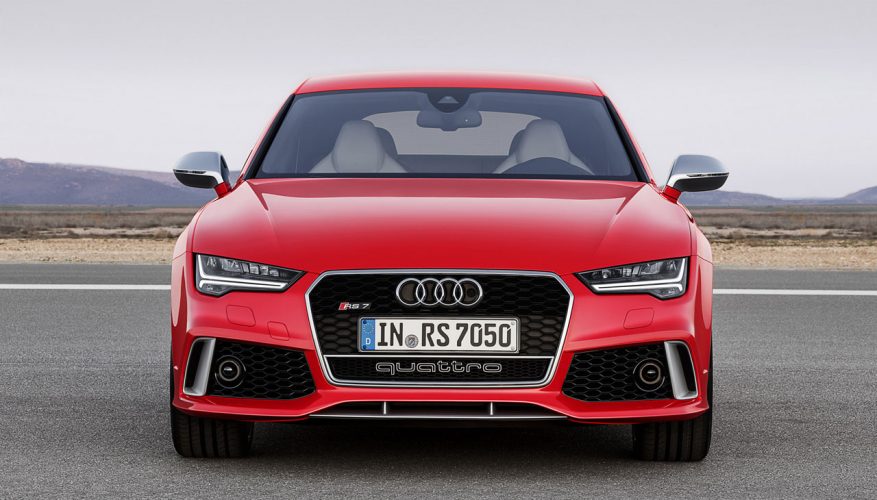 By: Trevor Hofmann
After only weeks of Audi’s 2015 A7 update, the Ingolstadt, Germany-based premium brand has revealed the latest version of the sweptback five-door coupe’s sportiest iteration, the 2015 RS 7 Sportback.

What’s not changing is the car’s powertrain, but this was hardly a sore point. The twin-turbocharged, direct-injection, cylinder deactivation-capable 4.0-litre (4.0 TFSI) V8 continues to produce a very healthy 560-horsepower and equally robust 516 lb-ft of torque, while a quick-shifting paddle-shift actuated eight-speed automatic transmission puts all that thrust down to the tarmac via Audi’s legendary Quattro all-wheel drive system. The result of all this go-fast goodness is a sprint from standstill to 100 km/h in just 3.9 seconds and a top speed that ranges between 250 and 305 km/h.

Why the difference in top speed? The 2015 RS 7 Sportback will offer two optional Dynamics packages, upping top speeds to 280 km/h or optimally 305 km/h, neither of which will be much use here in North America. Just the same, these packages may become available here (we’ll let you know when Audi releases information about the Canadian-spec RS7) for those who want to play Russian roulette with their drivers’ licenses. Other options include adaptive dampers, dynamic steering, carbon-ceramic brakes, and 21-inch alloys (replacing the standard 20s).

"The Audi RS 7 Sportback confirms the reputation of the RS models as the superior, top athletes of our brand," commented Prof. Dr. Ulrich Hackenberg, Member of the Board of Management for Technical Development of AUDI AG. "The combination of a powerful four‑liter V8 engine with cylinder on demand technology, quattro drive and intelligent lightweight design makes the RS 7 Sportback an outstanding piece of sports equipment for any fan of dynamic and yet efficient driving."

Standard 2015 RS 7 Sportback fare in European markets is a new MMI infotainment system with 4G LTE connectivity and a Bang & Olufsen sound system, while the HVAC vents have been redesigned, as have the shift paddles. Standard in all markets will be the new RS7’s freshened exterior styling, with a revised horseshoe grille featuring a narrow aluminum-rimmed quarter section at the bottom for a unique look, highlighted with the “quattro” script boldly written across its mesh black grille insert, as has been done with other recently updated RS models. New Matrix LED headlamps and revised taillight lenses finish off the look.

For RS 7 buyers concerned with fuel economy, Audi claims a premium unleaded combined city/highway consumption rate of 9.5 L/100km, with 221 grams CO2 per kilometre. Considering the engine’s performance, such a rating is very good. Audi points to its new Cylinder On Demand (COD) cylinder-deactivation system, which will “shut down four cylinders during partial load operation.”

While this new version of the RS 7 Sportback will be given the 2015 model year in Europe, it won’t make it to North America until the 2016 model year, so start saving your pennies.
©(Copyright Canadian Auto Press)
Car Shopping Tools