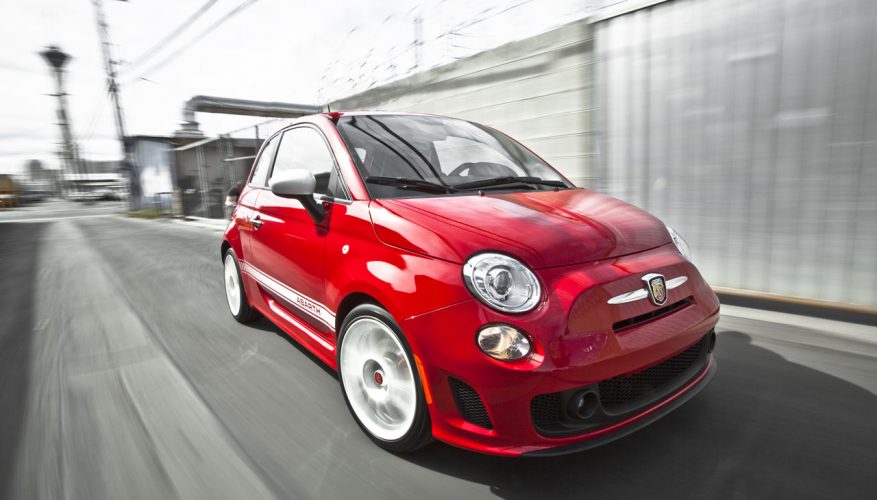 By: Lyndon Conrad Bell
Since 1949, the Abarth name has been closely associated with exceptional performance. Carlo Abarth founded his eponymous company in Italy that year to build racing cars. When it was time to choose a logo for his organization, the fiery Italian chose the scorpion because it was his zodiac sign.

Abarth’s team quickly became one of the most successful in Italy with drivers like Tazio Nuvolari, one of the greatest racing drivers of all time, in its cars. Like so many racing concerns of the day though, money eventually got tight, so Abarth turned his attention to road cars to help make ends meet. He came up with a performance kit for the Fiat Topolino, one of the most popular cars of the era. It worked, Abarth got paid huge, and when Fiat introduced the 500 in 1959, Abarth saw an opportunity to duplicate that success. Thus was born the Fiat 500 Abarth.

Over the years, Abarth’s collaborations with Fiat increased. So much so, the conglomerate bought Abarth’s company in 1971, to use in much the same way as Mercedes-Benz would later employ AMG and BMW would bring into play the M division to modify their standard models and make them into screaming performers.

Power comes from a 160-horsepower 1.4-litre turbocharged four-cylinder engine. The turbocharger is calibrated to produce 18 psi and spins at 23,000 rpm. The engine also generates 170 ft-lbs of torque. This power is funneled to the front wheels through a specially modified version of the standard 500’s five-speed manual transmission. Abarth parts unique to the 1.4-litre engine include a cold air intake system with a high-flow air filter, and an Abarth-designed free-flowing dual tipped exhaust system.

The 500 Abarth also offers both normal and sport drive modes. In the sport mode, steering feel is weighted a bit heavier to be more accurate at high speeds, and the throttle response is advanced for faster tip-in. The sport mode is also where the full 170 ft-lbs of torque are made available. In the normal mode, maximum torque output is 150 ft-lbs.

Routing that much power to the front wheels of a car this light (a bit over 1,100 kilos) is typically a recipe for torque steer. The 500 Abarth mitigates it partially through the employment of unequal length half shafts. To ensure reliability, the size of all of the 500’s driveline components is increased to survive the additional power output of the Abarth 500.

In addition to the engine revisions, the 500 Abarth gets a performance tuned suspension system and a more aggressive exterior styling kit. Over and above distinguishing the look of the high performance Abarth model, the aero kit also improves the Fiat’s aerodynamics.

The aforementioned suspension system employs Koni twin-tube shocks, a lowered ride height, an Abarth-specific MacPherson-based front suspension configuration, and stiffer spring rates. Additionally, the rear suspension gets stronger coil spring supports with stiffer springs, a solid rear stabilizer bar, and a more robust design for the twist beam axle. These mods endow the 2014 Fiat 500 Abarth with tenacious grip. The little sportster sticks like a tick on a hunting dog. What’s more, the steering system is modified to incorporate a faster ratio, giving the Abarth that go-kart turn-in so favoured by drivers in this class of car.

Of course, all of that would be a wash if the engine wasn’t up to the task, and in this case the little 1400 cc powerplant is solidly in the game. It screams like a maniac when it’s running hard, but that just adds to the enjoyment of using it for all its worth. Turbo lag is all but non-existent, and good thrust is offered throughout the engine’s rev range.

The brakes work with you too. Despite the quickness of the car, its braking system can scrub off speed over and over again without losing its bite. You’ll have a ball auto crossing the 500 Abarth. Between the delightful engine note, its well-practiced obedience to control inputs, and the consistent predictability of its behaviour, the 2014 Fiat 500 Abarth is a car you’re going to have a lot of fun driving. You’ll appreciate its fuel economy too, rated at 7.3 L/100km city and 5.8 highway.

Pricing starts at $21,995 for the hatchback and $25,995 for the Abarth Cabrio.
©(Copyright Canadian Auto Press)
Car Shopping Tools