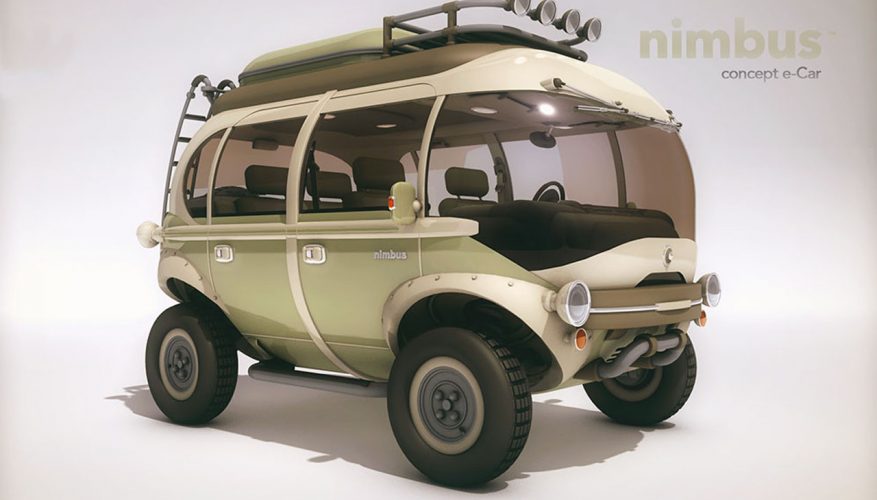 By: Simon Hill
Given that Brazil was the last country in the world to produce the classic Volkswagen Kombi microbus, ending production just last year, it only makes sense that it’s a Brazilian designer who has come up with the Nimbus.

Eduardo Galvani’s Nimbus Concept e-Car interprets the spirit of the original Volkswagen Kombi, but with its own adorably distinct style, plenty of retro-futuristic touches, and thoroughly modern underpinnings.

Powering the Nimbus is an extended-range hybrid electric drivetrain similar to that in the Chevrolet Volt, with a 130 kW (180-horsepower) electric engine drawing energy from a lithium-ion battery. Regenerative brakes and an array of rooftop solar panels help feed energy back into the system, and when the lithium ion battery becomes depleted there’s a tiny internal combustion engine that can run a generator to power the system and provide extended range.

The drivetrain offers four modes: Energy Saver, Standard Trip, Faster Cruise and Four-wheel Drive. Galvani claims the Nimbus should be able to achieve consumption as low as 1.3 L/100km (181 mpg) with a relaxed 0-100 km/h acceleration time of 13 seconds and a top speed of 160 km/h.

The body of the Nimbus features a self-cleaning finish on the exterior panels, and uses lightweight materials including carbon fibre, aluminum and titanium to maintain a svelte 1,619-kg curb weight, despite having external proportions just barely shorter than a Mercedes-Benz G550 (4267 mm long) and a full 610 mm taller (2,590 mm tall).

Inside, the cabin features seating for five and panoramic windows for a sweeping view of its surroundings. There is an onboard wi-fi hub, numerous USB plugs, a small refrigerator, and a removable tablet computer. The tablet is loaded with proprietary software that lets the Nimbus owner control the vehicle’s audio system, interior lighting, climate control and navigation display. It can also display data from an onboard inclinometer, altimeter and weather station, plus of course it features a full web browser with social media and video conferencing capability.

Unfortunately for anyone hoping to get their hands on a Nimbus, the vehicle is strictly a concept at this point, unless Galvani can convince a manufacturer to take his design into production. Is Volkswagen ready to embrace a new Brazilian-designed Kombi concept? It’s unlikely, but fans of the old microbus can only dream.