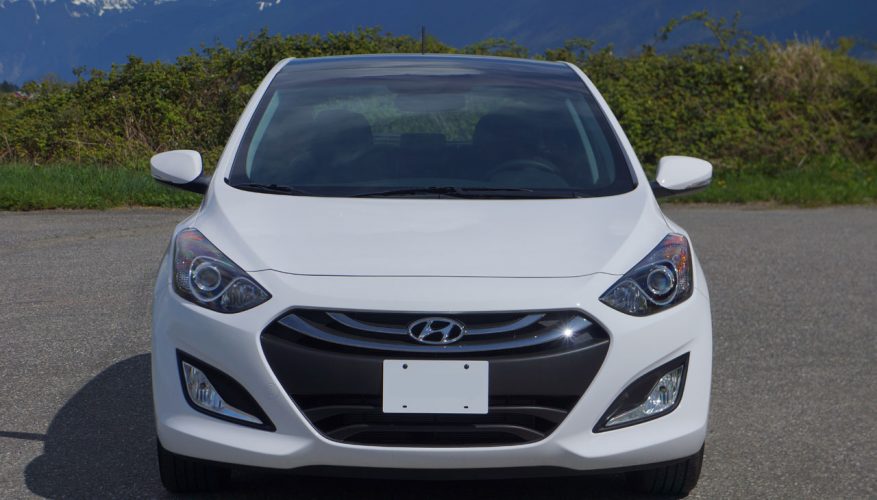 By: Trevor Hofmann
Now this is one great looking car. I’m starting to see more and more Elantra GTs on the road, and each time one drives by it takes control of my eyeballs, fixating them on its backside and leaving me wondering why few other brands can manage as attractive a hatchback design.

The problem with the 2013 Elantra GT, the first year of the new model, wasn’t its styling, and to be true its 1.8-litre engine was only a problem if go-fast performance was your aim when purchasing. The 1.8 was a good engine with reasonable acceleration thanks to 148 horsepower and 131 lb-ft of torque, but this new 2.0-litre mill is altogether more pleasing. It produces a satisfying 173 horsepower and 154 lb-ft of torque, which, in case you’re not a math honours student, results in a gain of 25 horsepower and 23 lb-ft of torque.

Normally the smiles brought on by big performance improvements are turned upside down at the gas pump, but the new 2014 Elantra GT’s fuel economy isn’t much thirstier than the outgoing car at 8.5 L/100km city, 5.8 highway and 7.3 combined with the six-speed manual and 8.5, 6.0 and 7.3 with the six-speed automatic.

Other than the engine, most everything stays the same with the 2014 Elantra GT. Its stylish exterior is identical, as is its quality interior. The SE Tech trimmed model I recently tested was also identically outfitted to a 2013 version I drove last year, from its panoramic glass sunroof right down to its gorgeous chrome-trimmed split five-spoke alloy rims on 215/45R17 all-season tires. Inside, it’s worthy of premium name-dropping, with a high-quality soft-touch dash top, soft-touch door uppers front and rear, and even pliable padded door inserts front and rear.

Additional features added to the SE Tech that get pulled up from lesser trim levels include the usual powered windows and locks, the latter with remote entry, plus heated and powered side mirrors, automatic headlamps, fog lamps, a rear spoiler, ABS-enhanced four-wheel disc brakes with electronic brakeforce distribution, Vehicle Stability Management with electronic stability control and traction control, seven airbags including one for the driver’s knees, a six-speed automatic transmission with Hyundai’s Shiftronic manual mode, and lastly something Hyundai calls Driver Selectable Steering (DSS), all for $8,350 over the base Elantra GT L trim’s $18,449 starting price, resulting in an MSRP of $26,799 plus $1,595 for freight and pre-delivery prep.

Yes, if you weren’t impressed with everything before this last item, the inclusion of DSS is downright amazing for a compact model in this Hyundai’s price point. Standard in the just-above-base GL trim level, DSS lets you to customize your driving experience between Sport, Normal and Comfort steering modes, the kind of feature normally only offered by premium brands costing at least twice as much as this little Korean.

Likewise the efficient six-speed automatic features manual mode to make that driving experience yet sportier, or alternatively to short-shift your way toward a lower fuel budget. I found myself leaving the car in Drive most of the time and just enjoying its comfortable ride. The suspension setup is sporty, but not so much that it feels rough or obtrusive. Throttle response is where the GT’s fun-loving character really comes through, the new engine transforming the car into a real sport compact. Still, in the same way that the ride and handling setup doesn’t bias the car so much toward performance that it becomes uncomfortable, the drivetrain feels quick without being so edgy that it’s a pain to drive day in and day out. Around town it’ll dart in and out of traffic if needed, but it’s just as happy puttering along in the slow lane.

Another area where the Elantra GT boasts versatility is behind the rear seats, and even more so when those 60/40-split seatbacks are folded down. The GT amasses 651 litres of gear-toting space in back of the second row and a total of 1,444 litres with the seats laid flat.

In essence, the Elantra GT is more like a sport wagon than a hatchback, in line with the 2012 Elantra Touring model it replaced. This gives the car a unique position within the compact segment, being that there aren’t many sporty wagons left, let alone wagons at all. That it looks so good while being totally practical is its trump card.
©(Copyright Canadian Auto Press)
Car Shopping Tools