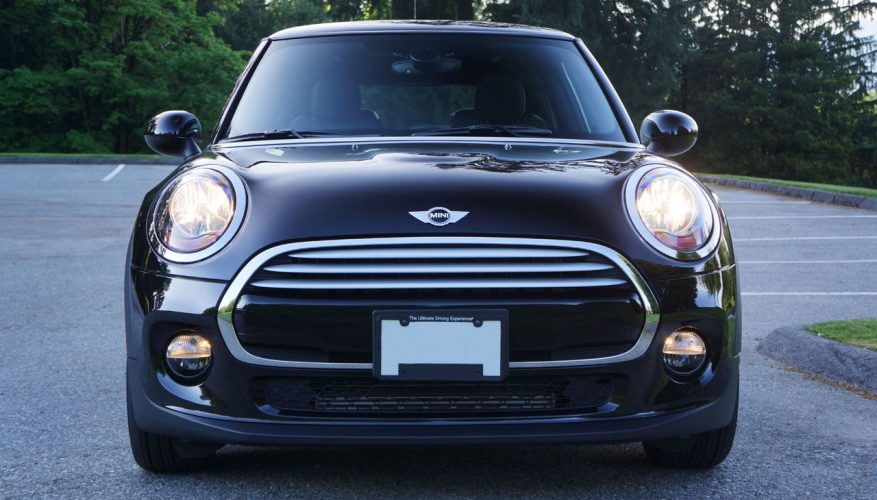 By: Trevor Hofmann
Have you ever wondered why Mini Cooper drivers are usually smiling? They pull up beside you with silly grins pasted across their faces while we, in our mundane A-to-B appliances, continue to slog along day in and day out, only enjoying your commute when Pharrell Williams makes us feel Happy. What gives? Why aren’t we having fun every moment behind the wheel too?

The very existence of the Mini has caused such thoughts amongst Canadian drivers since the early ’60s, and the car still questions our priorities today. When it really comes down to it, the British brand’s raison d’être makes a lot of sense. After all, if we have to drive to get where we’re going, why not have a good time along the way?

Mini categorizes fun in three different ways: Cooper, Cooper S and Cooper JCW (John Cooper Works). While any red-blooded performance enthusiast would opt for the latter if given the choice, or at least snap up the keys to the mid-grade Cooper S if they were made available, being forced into the base Cooper reminded me of just how inherently good any Mini is. Granted, the 2014 model is vastly improved in most every way over previous generations, especially with respect to performance. If you hadn’t heard, the base Cooper now gets the twin scroll turbo of the S and JCW, but not the S model’s 189 horsepower and 207 lb-ft of torque (the same twist as last year’s JCW on overboost), or for that matter the JCW’s as yet unannounced output (Mini is just saying “Street legal. Barely.” on its website), but the entry model’s 134 horsepower and 162 lb-ft of torque is way stronger than the outgoing model’s specification, up 13-hp and 44 lb-ft of torque over last year, which is more than ample for such a lightweight car (1,182 kilos with the manual or 1,213 kg with the automatic).

The big mechanical news isn’t the turbocharger and resultant power boost, mind you, but the reduced cylinder count. Even after driving the new base Cooper I would never have realized it only lined three cylinders in a row if I hadn’t read about it first, but such is the truth. With fewer than eight seconds needed to sprint past 100km/h it offers healthy performance when mated to its six-speed automatic transmission (it’s a hair faster this way than with the standard six-speed manual), and thanks to a countershaft the triple delivers impressive refinement, which I suppose should be expected of an engine that will be shared with upcoming BMW models.

The car’s new underlying architecture will also find its way under new front-wheel drive cars bearing the blue-and-white roundel, and therefore we can confirm to any disgruntled 2 Series Active Tourer naysayers that they shouldn’t be disappointed with road-holding, albeit the feel of being pulled along from the front will be different from any previous BMW. As for Mini, even the base Cooper is a joy to fling through corners, my tester sporting stock 195/55R16 Hankook rubber on 14-spoke alloy wheels.

That the latest Mini “Hardtop” (as it’s now called) is as fun to drive as outgoing models is an impressive feat. After all, it’s not anywhere near as mini as the revitalized “MINI” that arrived on North American shores 12 years ago. It’s actually 114 millimetres (4.5 inches) longer than the Mini Cooper “hardtop” it replaces, which itself was 68 mm (2.7 inches) longer than the reworked original Bini (BMW-Mini). That represents 183 mm (7.2 inches) of growth since inception, and we’re not talking about the original original Sir Alec Issigonis-designed BMC Mini that measured a mere 3,054 mm (120.2 inches) long. The new one, in comparison, is a bus, spanning some 3,837 mm (151.1 inches) from gaping maw to largely lit tail. Its wheelbase gain of 28 mm (1.1 inches) makes for a more accommodating interior, both for occupants and cargo, while the front track is 43 mm (1.7 inches) wider and rear 33 mm (1.3 inches) wider than the outgoing model. Commensurately cargo space has improved by 36.8 litres (1.3 cubic feet). See it parked beside most any other car and it still looks pretty small, but pull up beside any of its predecessors and it’s easy to see that the new Mini isn’t as mini as it once was.

It’s also a lot nicer inside than any of its predecessors. Truly, compared to the original Bini this latest version feels like a compact luxury car. There are soft touch surfaces just about everywhere, but unfortunately there are some piano black surfaces too (this stuff collects dust and grime like a Swiffer). The switchgear is all top-grade quality, however, and the placement of the new engine ignition “pushbutton” is almost as clever as the red toggle switch looks cool. It’s housed dead centre in a row of classic chrome toggles that reside just below the auto HVAC system on the centre stack, the toggle to the left for switching on/off the auto idle-stop system and the one on the right for turning on/off the stability control. Another oddity is a speedometer that sits (wait for it…) directly in front of the driver! Yes, instead of the dinner plate-sized speedo from the outgoing car, now there’s a smaller yet more useful device exactly where it’s needed, flanked by a crescent moon-shaped tachometer to the left and a massive row of orange fuel gauge LEDs to the right. Mini continues to confuse new-to-the-brand drivers by lighting up all the LEDs in an alarming “warning” shade of orange when the gas tank is full, instead of the opposite. The brand may want to rethink this.

Mini doesn’t need to do anything different with the front seats, however. They’re completely comfortable and totally supportive, ideal for holding driver and front passenger securely in place while having a little fun on a serpentine stretch of tarmac. Likewise the driving position is fabulous. This car is perfect for getting up close and connected like a rally driver, with all controls falling easily to hand and good sightlines all-round for excellent 360-degree visibility. It’s a car that rewards a good driver due to a neutral balance that can be provoked into oversteer with a little hand-wringing, although more naturally tends to understeer when pushed to its outer limits. This makes it a great car for a budding racer to learn his/her craft, because it’s wonderfully submissive when backing off the throttle is needed, tucking its nose and tail in and obeying the yellow and white guidelines if pointed in the right direction. Just the same, it’s smart to test its (and your) abilities on a track if available, or a makeshift autocross course.

On public roads I found myself switching between the “SPORT << . >> GREEN” controller on the base of the shift lever, depending on the traffic situation. When the road opened up I moved the switch to the left for a sportier experience, although more often than not in big city gridlock I ended up flicking it to the right to save fuel and pay respect to surround trees and shrubbery.

When choosing one of the Cooper’s standard Driving Modes the rim of the large circular infotainment interface (which previously also housed the speedo) glows one of three colours: red for Sport, green for (you guessed it) Green, and yellow for the default setting. Likewise the same standard lighting system (dubbed Excitement Lights) helps you visually distinguish HVAC system temperatures, with blue for colder and red for warmer. After all this if Mini prevented the lightshow from glowing along with the audio system they would’ve left us all scratching our heads, therefore you can breathe a long sigh of relief that the simple act of increasing volume makes the light glow red. I’m guessing the system reveals other colours too, but I didn’t ask it to do other activities to bring out any unmentioned hues, nor did I delve into the car’s personalization settings to see if these allowed for a larger palette, so no burnt orange, periwinkle mauve, sea teal, etcetera that I can speak of.

The various buttons, knobs and switches are rubber trimmed, well made and nicely damped for a high-quality feel, while everything works as advertised. The entertainment system is simple and straightforward compared to many on the market, and the sound quality is very good. The automatic HVAC system is also easy to figure out and delivered warm and cool filtered air as expected.

Not everything mentioned is standard fare in the base Mini Cooper Hardtop, such as automatic climate control that comes as part of either the Loaded Package or Fully Loaded Package. Air conditioning is standard, though, as is the audio system I spoke of a minute ago, which also includes USB and aux plugs as well as Bluetooth hands-free. Other standard features include a leather-wrapped multi-function steering wheel, heated power mirrors, powered windows and locks, dynamic cruise control and more.

Along with the aforementioned automatic climate control, my test car’s $2,100 Loaded Package added proximity sensing access with pushbutton ignition, an auto-dimming rearview mirror, heated front sport seats, automatic headlamps, an on-board computer, a panoramic glass sunroof, front and rear fog lights, and more. Upgrade to the $3,500 Fully Loaded Package and the features menu grows to include a colour infotainment display with navigation, and more. There’s also a $1,000 Essentials Package that includes front and rear fog lights, heated front seats and the panoramic sunroof (just how a panoramic sunroof became essential I can’t say); a $1,000 LED Lights Package that first requires the inclusion of one of the above packages and then adds LED headlights and LED front fog lights; an $850 Visibility Package which adds a rearview camera and a heads-up display; and a $500 Style Package that features chrome interior and exterior trim, plus piano black and dark silver interior accents. Additionally, there’s a media connectivity package and one for nav equipment, while my test car had a number of standalone features such as the automatic gearbox at $1,400, the Dynamic Damper Control system I spoke of earlier at $500, an anthracite coloured roofliner at $250, and metallic paint at $590 for a total of $25,740 before $1,955 for freight and pre-delivery prep.

After living with the new 2014 Mini Cooper Hardtop for a week I only have two complaints. First, its powerful turbocharged three-cylinder requires 91 octane fuel and therefore is about 10-percent more expensive to run than a car with similar fuel economy that can accept regular unleaded; and second, the little plastic key cap on the door handle fell off when closing the door and thereafter wouldn’t stay on. It should only pop off after prying it loose, which is only needed when you require the manual twist of an old-school key. Hardly a big problem, I’m guessing the fix was taken care of in a few minutes and of course would be done at no cost to an owner thanks to the brand’s four-year or 80,000 km comprehensive warranty.

If you’re not familiar with Mini pricing you’ll find it higher than non-premium mainstream subcompacts of similar size, but not much higher if you factor in the little Brit’s standard equipment list. Likewise the wee Mini is not nearly as expensive as other premium players. This might be the only way any Mini sits on middle ground, the 2014 Cooper Hardtop starting at $20,990 plus freight. Considering its standard feature set, high-quality interior, superior performance, unquestionable style and respected pedigree, the 2014 Mini Cooper Hardtop is a steal. So ask yourself: why aren’t you driving around with a smile on your face every day?