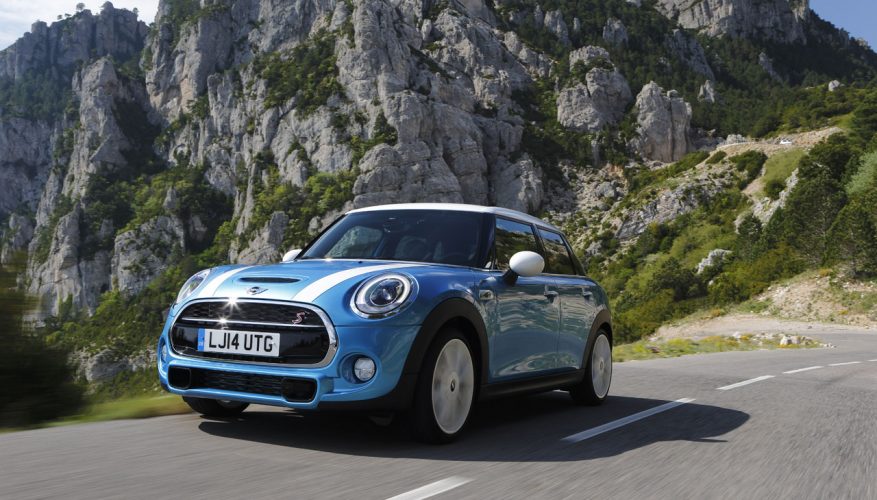 By: Simon Hill
A few short months after debuting its slightly enlarged new third-generation Cooper Hardtop, Mini has gone whole hog and introduced a five-door variation, officially dubbed the Cooper 5-Door. It’s a model that has long been rumoured, slotting in between the sporty but slightly impractical Cooper Hardtop and the much bigger Countryman crossover.

The new passenger-friendly Mini 5-Door is 161 mm (about 6 inches) longer than the three-door Hardtop, riding on a wheelbase that’s been stretched by 72 mm (about 3 inches). The extra length has been divvied up between the rear passenger area and cargo compartment, so the 5-Door provides both a little more rear legroom and a bit more luggage space than the Hardtop.

It also gets a third rear seatbelt, making it officially a five-passenger car (the Hardtop is only a four-passenger car). That said, three across in the back seat will be a tight fit, despite Mini carving out 61 mm of extra elbowroom thanks to carefully designed interior door panels.

In most other respects, the 5-Door is the same car as the third-generation Hardtop. Under the hood it has the same pair of engines, either a 1.5-litre turbocharged three-cylinder for the base Cooper or a 2.0-litre turbocharged four-cylinder for the Cooper S, with both models getting a choice of either a six-speed manual or six-speed automatic transmission driving the front wheels. Power output also remains the same at 134 horsepower and 162 lb-ft of torque for the three-cylinder, or 189 horsepower and 207 lb-ft of torque for the four. There’s also an overboost function that can temporarily bump the two engines’ torque figures to 170 and 221 lb-ft respectively.

Inside, the 5-Door gets the same redesigned dashboard as the new Hardtop. This now places the tachometer and speedometer in a conventional location in front of the driver, with a round-shaped infotainment control panel taking over the central dash space where Minis traditionally used to mounted their dinner-plate sized speedometers.

While the five-door layout and more conventional dashboard speak to a more mainstream marketing approach, Mini promises that the 5-Door will retain the same agile handling and go-kart like driving feel that Mini has become famous for, and the same wide selection of personalization options including roof and exterior mirror decorative styles, hood stripes, seat upholstery types, colours and available equipment.