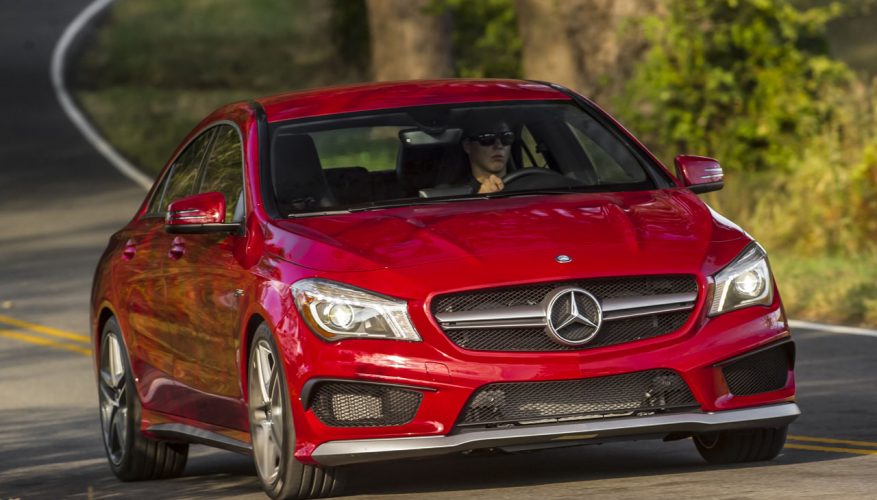 By: Lyndon Conrad Bell
Is it remarkable that the first four-cylinder production engine offered by AMG would also be the most powerful production four-cylinder engine ever offered en masse-period? After all, AMG is known for turning each Mercedes product it gets its hands on up to 11 on a scale of 10, so why expect anything less?

Hand built, the 355 horsepower turbocharged four-cylinder installed in the 2014 Mercedes-Benz CLA 45 AMG 4Matic does indeed boast the distinction of being the most powerful production four-cylinder engine ever offered for mainstream public consumption. Generating 332 ft-lbs of torque, the engine is teamed with a seven-speed dual clutch gearbox and all-wheel drive.

To get the 2.0-litre mill to pump power so prodigiously, the speed-crazed engineering team at AMG prescribed a twin-scroll turbocharger producing some 26-psi of boost-along with direct fuel injection and variable valve timing. Optimal density of the intake charge is ensured with a water to air intercooler, while one of the least resistive exhaust systems ever fitted to a production car maximizes airflow out of the engine.

Further, to thoroughly capitalize on each and every drop of premium unleaded, the 2.0-litre four imposes multiple spark and injection events per stroke. The intensely explosive violence resulting from all of these machinations is contained within a sand-cast aluminum crankcase, housing forged pistons and a forged steel crankshaft. Reducing internal resistance to an absolute minimum, AMG’s ultra-slippery NANOSLIDE cylinder liners and friction-optimized piston rings are fitted.

With all of that said, fuel economy-particularly given the CLA 45’s high performance nature-is really quite remarkable. Canadian estimates are an optimistic 9.0 L/100 in the city and 6.5 on the highway. More realistic U.S. EPA results say you can anticipate a metric-converted 10.2 L/100km in the city, 7.6 on the highway, and 9.0 combined.

Sitting behind the wheel of the CLA 45 AMG, gripping the optional sport steering wheel of our test car, one takes note of the perfectly placed Alcantara inserts positioned precisely where your hands most often come into contact with the wheel. The wheel’s flat bottom, in addition to looking way cool, also serves to inform you exactly where you are in its range of travel. Meanwhile, our test car’s optional Recaro sport seats were nothing less than thinly disguised racing thrones. With openings for four-point racing harnesses and very deeply bolstered, the seats contain you more so than hold you.

It’s a good thing too, because once you give in to temptation, scenery moves past the CLA 45 AMG with astounding quickness. Ecstatically devouring air and fuel in exchange for producing rapidly increasing velocity, the engine snarls and snorts greedily. The exhaust note is absolutely exhilarating, and the POOOFTS discharged during full-throttle gear changes sound just like those emitted by a Formula 1 car. You’ll envision flames shooting out of the back of the AMG CLA every time you hear it. You do have to be careful though, the engine winds so freely you’ll be up against the rev limiter before you know it.

Speaking of gear changes, the gearbox is unfortunately the weak link in the CLA 45’s powertrain. In its automatic modes, under anything but full throttle it shifts as early and as often as feasible to help the engine deliver the best possible fuel economy. This means it can make the CLA 45 feel somewhat lethargic at times in day-to-day driving. While you get used to it after a while, it can nonetheless be quite annoying.

While we’re on the subject of annoyances, the harshness with which our test car rode was most un-Mercedes-like, although in fairness it was fitted with the optional AMG Performance Suspension Package. Hopefully, the standard suspension configuration offers better ride quality, because this one completely sacrifices ride to the Gods of road holding.

The good news is the Gods are apparently wholly pleased with the sacrifice because the CLA 45 AMG sticks to the road with unrelenting temerity. Nicely balanced, you can go screaming into virtually any corner counting on the suspension and the all-wheel drive system to pull you through. If you completely overcook it, the CLA 45 will eventually plow into understeer. But the car’s limit is so far out there you’ll have to be doing something incredibly stupid to find it on the street. What’s more, the brakes are absolutely fantastic. Their stopping power is, in every way, commensurate with the power produced by the engine.

Long story short, if you can live with the CLA 45’s ride, you’ll love the drive. However, there is one more downside to consider-the price.

As tested, our CLA 45 AMG came in at an eye-opening $65,900 plus freight. Yes, this does still make it the most affordable AMG Mercedes-Benz you can get, but when 355 horsepower is stacked up against a $65,900 sticker, you gotta really want you some AMG because a number of cars offer considerably more power for the same money.

Might we interest you in say, a 662-horsepower Ford Mustang Shelby GT500? Fortunately a base CLA 45 AMG can be had for slightly less than the all-powerful pony car, at $49,800 plus freight.
©(Copyright Canadian Auto Press)
Car Shopping Tools