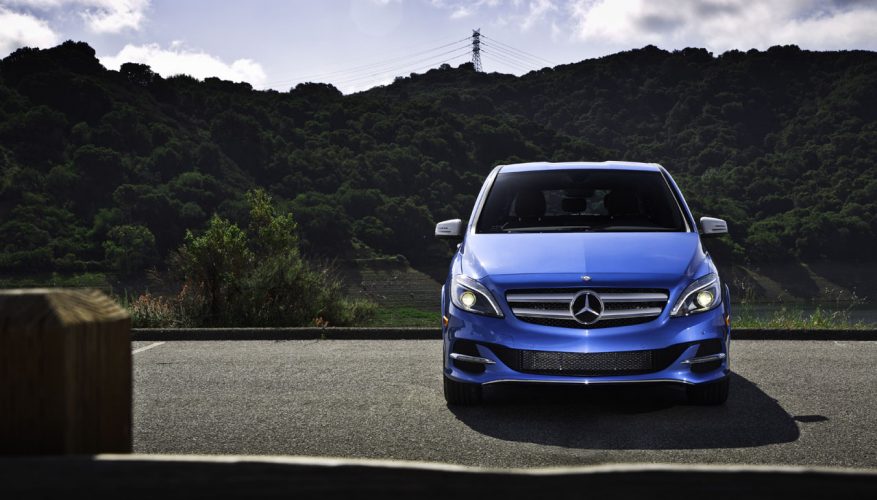 By: Lyndon Conrad Bell
While we’ve had the Mercedes-Benz B-Class here in Canada for quite some time, this marks the first year of the Electric Drive version of the car. With a powertrain developed and produced by Tesla Motors down in California, probably the most remarkable aspect of the B-Class Electric Drive Mercedes-Benz is the fact it is wholly unremarkable.

Sit behind the wheel, very little tells you this is the electric version of the automobile. The only immediate visual cue is the replacement of the tachometer with an analog power usage gauge. In other words, if you’ve been in any Mercedes-Benz product built during the past five to seven years, you’ll feel right at home in the B-Class Electric Drive. You won’t encounter any flashy “electric” graphics. There is no futuristic “whooshing” sound when you turn the key to the run position. Nothing overtly screams “electric car” here.

Of course, if you’ve been paying attention to the approach Mercedes-Benz has been taking with its alternatively-fueled vehicles, you’ll note the company doesn’t do flashy just for the sake of flashy. The diesel and hybrid models look just about identical to their gasoline-powered models. Subtle is the Mercedes way. Interestingly though, we’ve encountered a number of individuals who feel it should be different. They question how the electric Mercedes will gain recognition if it looks like every other B-Class model you’ve ever seen.

As we mentioned above, the powertrain was developed in conjunction with Tesla Motors. Its thrust is derived from a liquid-cooled 28 kWh lithium-ion battery pack, which delivers electricity to a 100 kW electric motor (equivalent to approximately 134 horsepower), and a single speed transmission. The motor’s 228 ft-lbs of torque are routed to the model’s front wheels.

The battery pack is said to be good for a maximum range of 137 kilometres when the B-Class is driven conservatively. Recharging, with a level-two recharging device (which Mercedes will offer with the vehicle), can be accomplished from near depletion in about 3.5 hours. However, the battery can also be charged to within 80 percent of its capacity (abut 100 km of range) in just under two hours.

In addition to plugging the B-Class into its charging device, electricity can be recaptured while on the move when coasting and braking. This regenerative charging is largely similar to that employed by gasoline/electric hybrid models in that pretty much anytime your foot is off the go-pedal, the car’s momentum-or energy that would otherwise be burned off by the braking system is rerouted into the battery pack.

Further, the Mercedes offers variable modes to accomplish this as efficiently as possible, or as unobtrusively as possible. Paddles behind the steering wheel enable you to set the level of aggressiveness you desire, and you can even put it in an automatic mode. This will monitor traffic ahead of the electric B-Class and automatically institute regeneration when cars in its path slow down. It’s very subtle in operation, but if you pay specific attention to it, you can sense it functioning. To free owners from worry about the longevity of the battery pack, Mercedes is guaranteeing the unit to hold at least 70 percent of its full capacity for either eight years or 160,000 km.

We are talking about a Mercedes-Benz product here, so performance is just as much of a consideration as economy. To this end, the B-Class Electric Drive also offers a Sport mode, which accelerates the car with considerably more alacrity than the normal “Eco” mode. You really can feel the instantaneous torque output we’ve come to appreciate from electric cars in the Sport mode, but you should be apprised availing yourself of it, as it will cause the battery to be depleted more rapidly.

Out on the road, the B-Class Electric Drive operates nearly silently, with only a restrained turbine-like whine emitted from the electric motor. As we intimated before, peak torque is available right at tip-in, so the B-Class moves out with no hesitation. Smooth, quiet, and drama-free, the Electric Drive B-Class is a wholly pleasant automobile to drive.

In addition to the quiet operation, there are a couple of things you’ll have to get used to. When you start the Mercedes, you have to look at the power gauge to make sure you get the ready indication. And, when you brake, the first few inches of pedal travel are regenerative only. You have to go a bit farther down into the pedal’s range of travel to actually engage the pads and rotors of the braking system. This does alter braking feel somewhat, but you get used to it in fairly short order. Other than that it goes, turns, and stops just like any other B-Class Mercedes.

Basically, as mentioned in the beginning of this review, the most remarkable thing about driving the 2014 Mercedes-Benz B-Class Electric Drive is how truly unremarkable the experience is.
©(Copyright Canadian Auto Press)
Car Shopping Tools