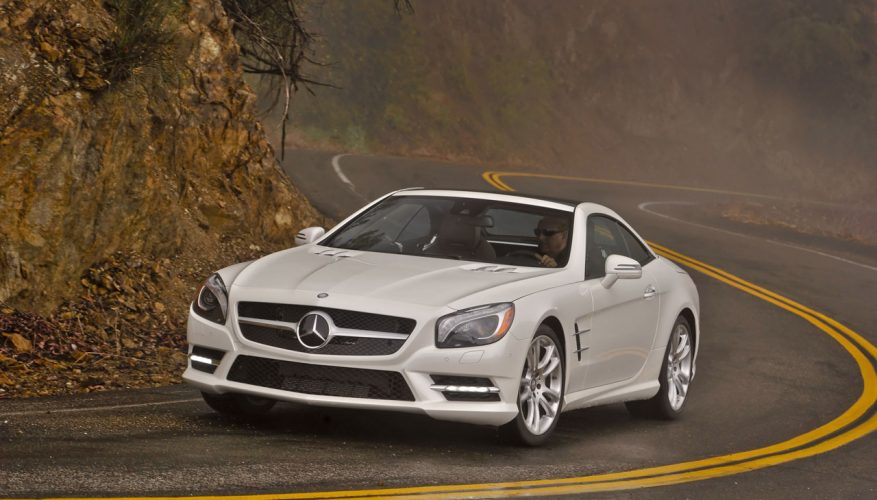 By: Lyndon Conrad Bell
Hardly any sports cars offer the versatility, style, heritage, desirability, and overall cachet of the Mercedes-Benz SL 550. In fact, we dare say no other sports car can deliver all of those qualities in a manner commensurate to that of the Mercedes-Benz two-seater. Interestingly, back when the model was conceived, the letters “S” and “L” in its nomenclature represented the words Sports and Light; as the original SL cars were both sporty and lightweight. Over the years, this changed.

As the cars became increasingly more luxurious, their weight factor steadily crept up. Eventually, the L better stood for “Laden” rather than “Light”. However, with the introduction of the current version of the Mercedes-Benz SL (referred to internally by Mercedes-Benz as the R231) lightness once again applies (sort of), as this is the first mainstream SL model to be crafted primarily of aluminum.

Looking back over the history of the SL, we’ve noted an interesting pattern. Every other version of the car seems to be-shall we say-not exactly beautiful. For an example of what we mean, take a look at the R230 SL offered just prior to this current one, between 2001 and 2008. Beautifully sleek and graceful of proportion, the current model looks frumpy parked beside it. Meanwhile, the R129, offered from 1989 to 2002, looks heavy compared to the R230, and the R107 SLs offered between 1972 and 1989.

So yeah, you can infer we’re not huge fans of the look of the current Mercedes SL. However, we are absolutely enraptured with the way it goes. Power comes from a twin-turbocharged 4.6-litre V8 producing 429 horsepower and a breathtaking 516 ft-lbs of torque. In addition to turbocharging, both direct fuel injection and variable valve timing are applied to the engine to tremendous effect.

The SL’s powertrain also includes a seven-speed automatic transmission with a manual shift function. Auto start/stop is incorporated to help the engine maximize its fuel economy potential. Zero to 100km/h is quoted at just a hair over four and half seconds. Top speed is limited to 210 kilometres per hour in stock trim. The U.S. EPA says to expect a metric-converted 13.1 L/100km in the city, 9.4 on the highway, and 11.7 combined. Canadian claimed fuel economy is less realistically rated at 11.9 city, 8.1 highway, 10.2 combined; use these for comparison purposes only. Given the extraordinary performance potential of this engine, those fuel economy numbers are quite respectable.

Also respectable is the way this SL feels when it’s on the move. Solid, smooth, confident, fast, and agile are the dynamic hallmarks of the 2014 Mercedes-Benz SL 550. The SL moves with the grace of a ballerina on twisting mountain roads. You can leap into corners, late brake, turn in hard, accelerate with deliberate purpose, and the SL will fly toward the next corner with the alacrity of a car half its size and weight. In fact, after one exceptionally rapid run we had to get out and take a look at the car to convince ourselves the Benz hadn’t shrunk around us.

And yet, cruising around town or out on the highway, the SL displays a sedate reserve. We are reminded of a rather profound observation attributed to a New York gangster; “The loudest guy in the room is usually the weakest guy in the room. It’s the quiet guy you need to watch out for.” The Mercedes bears this out beautifully. Its upright demeanor in day-to-day situations would never lead you to expect its powerfully visceral nature when used vigorously. With the SL 550 you’ll endure no discomfort owing to its speed and agility.

In fact, quite the opposite, the SL goes above and beyond to ensure your comfort. Features like its folding hardtop give you a choice between top down and closed coupe motoring. Further, the roof is translucent so you can admit daylight even without retracting the roof. What’s more, the roof can be had with what Mercedes calls  “Magic Sky Control”. Order the feature, and you won’t need a sunshade. The roof can be darkened almost completely at the touch of a button.

Other outstanding comfort and convenience features include a driver controlled adaptive suspension system, power adjustable seats upholstered in sun-reflecting leather-featuring heat, ventilation and massage functions; an automatic trunk lid with a foot-activated opening feature, and an integrated wind blocking screen, which rises at the touch of a button to eliminate buffeting in the passenger compartment when the roof is retracted.

If you’re blessed with the income to support an automobile of this nature, but for whatever reason can only have one car, the 2014 Mercedes-Benz SL 550 will give you all of the fun of a powerful sports car and endow you with all of the cutting edge technological marvels of a state of the art automobile, while simultaneously coddling you with all of the comfort and convenience features you could ever realistically require in a personal luxury automobile.

If-you’re blessed with the income to support it. As you might well imagine, a car with this much going for it doesn’t come cheaply. For the 2014 model year, Mercedes-Benz SL 550 pricing starts at $123,400 plus destination charges.