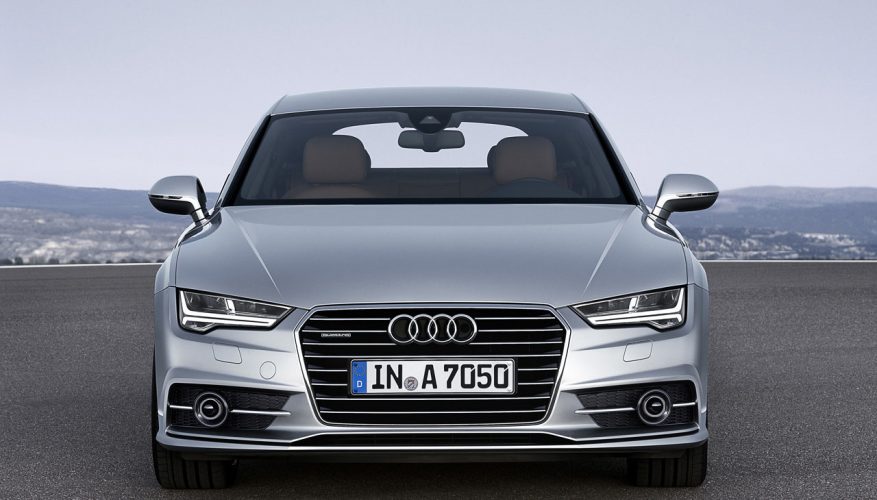 By: Trevor Hofmann
If you were expecting a radical styling departure for Audi’s sleek four-door coupe, hopefully you won’t be disappointed with the subtle upgrades made to the upcoming 2015 model.

After five years on the road, the Stefan Sielaff-designed A7 Sportback will get a modernized version of Audi’s trademark single-frame horseshoe-shaped grille up front, along with revised headlights and a reworked lower fascia, while the car’s sharply edged profile will remain identical. Its aft quarters will continue to slope gently rearward in the hatchback configuration that gives the model its “Sportback” designation, culminating with an upgraded bumper and newly fashioned exhaust tips, however the taillights will maintain the same size and mostly the same shape as the current model, albeit with new lenses.

Those lenses will feature de rigueur LEDs, as will the lamps up front, but the DRLs within the headlight clusters will be available with optional Matrix Beam LEDs that “light the road optimally without causing glare for other road users,” says Audi in an associated press release. These will come fitted with new dynamic turn signals.

Like today’s A7 Sportback, the passenger compartment will be the car’s pièce de résistance, the new model boasting new Beaufort walnut inlays enhanced with genuine aluminum accents, while seats and additional surfaces on the dash and doors will be upholstered in Valcona leather, available in a choice of five colours.

The front seats can be had with ventilation and massage functions, while Audi offers four different seat versions for optimizing comfort to maximizing performance. What’s more, Audi’s award-winning MMI infotainment interface will now get an Nvidia chip for quicker graphics processing, allowing better use of its top-line MMI Navigation Plus with MMI Touch system. Additionally, LTE-enabled internet connectivity will now be standard fare, while a head-up display system will be optional. Audi’s “phone box” system will now connect the primary cell phone to the A7’s antenna for better reception, while once again the model’s top-tier stereo will be made by Bang & Olufsen.

Under the hood, the Ingolstadt, Germany-based automaker will offer its powerful yet fuel-efficient 3.0-litre V6 TDI diesel in the three different variations depending on the market, with the top-most twin-turbocharged version now capable of 320 horsepower. This particular engine will come mated to a state-of-the-art eight-speed automatic transmission, while a seven-speed dual-clutch S tronic transmission will perform shifts for the rest of the engine lineup, which of course will include gasoline-powered variants.

In Audi-speak the latter mills get the TFSI designation, two of which will be available. The top-line TFSI comes fitted to the S7, a 4.0-litre variant capable of 450 horsepower and an impressive 9.3 L/100km combined city/highway mileage rating, partially due to Audi’s COD (cylinder on demand) technology.

In the middle of the TDI engine range, a 3.0-litre clean diesel will be capable of 272 horsepower. A 218 horsepower version of the 3.0-litre TDI engine will also be available, in Europe at least, powering the front wheels only and said to achieve city/highway combined fuel economy equaling 4.7 L/100km, impressive for a large sport-luxury car.

Audi’s seven-speed dual-clutch S tronic transmission has been completely redeveloped for use with the front-wheel drive A7, replacing the old multitronic gearbox. The 272 horsepower 3.0-litre diesel will get Quattro permanent all-wheel drive supplemented with a sport differential, which will actively distribute torque between the rear wheels.

The new A7’s impressive fuel efficiency is partially possible because of extremely lightweight construction materials and methods. The new A7’s body structure is primarily comprised of aluminum and high‑tech steel grades, while its overall high levels of rigidity allow for nominal noise intrusion.

Lightweight design also aids handling, some configurations of the new A7 benefiting from new lightweight brakes as well. Framing those brakes will be wheels ranging in diameter from 17 to 21 inches, while those up front will find direction via a new highly efficient electromechanical drive power steering system.

Furthermore, Audi’s drive select dynamic handling system will now come standard. Optionally, the A7 can be had with dynamic steering, two sport suspension setups, and adaptive air suspension, whereas the latter air suspension comes standard with the S7, but with a firmer setup.

Audi has long been a safety pioneer, and the A7 won’t go without the latest active and passive safety gear. The updated model will get a new adaptive cruise control system with stop and go functionality, along with an improved night vision assistant and Audi’s pre sense safety system. What’s more, Audi side assist and Audi active lane assist combine efforts to assist in safer lane changes.

Another A7 Sportback bonus is utility, the car’s liftback-accessible trunk opening up to 535 litres (18.9 cu ft) of capacity behind the split-folding rear seatbacks, or 1,390 litres (49.1 cu ft) of cargo space when these seats are laid flat.

The updated 2015 Audi A7 Sportback will go on sale later this year, with a starting price expected to stay close to the current model’s $70,400 base MSRP. We can expect more Canadian-specific information closer to launch.
©(Copyright Canadian Auto Press)
Car Shopping Tools