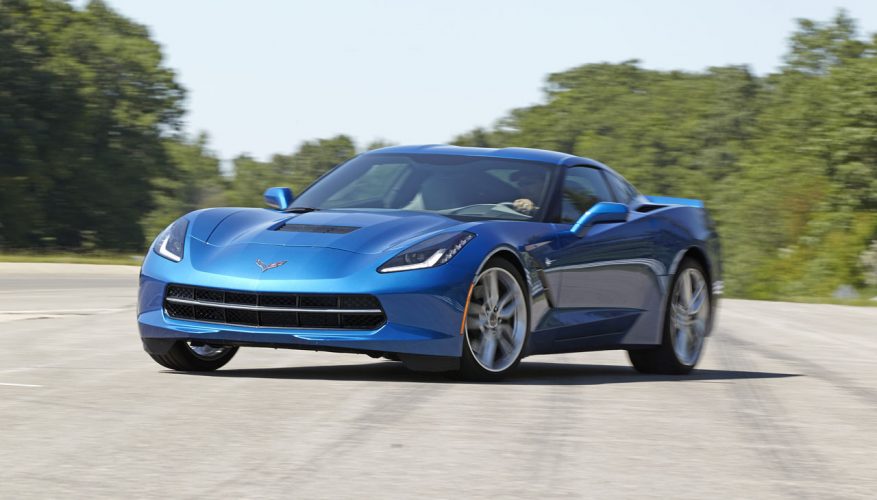 By: Lyndon Conrad Bell
For most of its lifetime, the Chevrolet Corvette has been something of a bargain in the realm of ultra high performance automobiles. Roundly celebrated for this fact, contemporary Corvettes have also been routinely lambasted for having interior treatments of such low quality it was half-jokingly said Chevrolet contracted Fisher Price, makers of the Playskool line of plastic toys, to craft the passenger compartment of the Corvette.

Characterized by overtly plastic-looking materials, uninspired designs, ill-fitting parts, squeaks and rattles, the maladies went on and on and on. And yet, with every preceding generation of Corvette, we’ve been told this problem has been corrected; each new Corvette has been said to have more attention lavished upon its interior treatment than any previous model. Thing is, they were all so bad, even with extra attention lavished upon them, they still came out poorly-until now.

The 2014 Chevrolet Corvette Stingray has a world-class interior treatment to go along with its world-class performance potential. In fact, we can honestly say without glancing away in hesitation, this new Corvette Stingray is the best Corvette ever. It surpasses any other sports car in its price range in terms of performance. And, it easily fights above its weight when it comes to challenging more expensive sports cars. Yeah, it really is that good.

The 1,525-kilo (3,362-pound) rear-drive sports car boasts a 455-horsepower, 6.2-litre V8 engine, capable of generating 460 ft-lbs of torque. Taking advantage of the latest technologies, the Corvette’s engineers have fitted direct injection and variable valve timing to maximize the output of the normally aspirated engine. No turbos here folks, just straight up displacement getting the job done.

But wait, there’s the potential for even more; if you order the optional variable-mode active exhaust system, the engine can breathe even more freely and will place 460 horsepower and 465 ft-lbs of torque-along with the most glorious exhaust note you’ve ever heard from a street car-at your beck and call. The deliciously sonorous result of running this engine to redline is one of the most thrilling experiences you will ever have behind the wheel of a car. What’s more, the outstanding exhaust note is accompanied by some of the most vicious acceleration we’ve ever experienced in anything other than something powered by turbofans. Chevrolet quotes a 4.2-second zero to 100 km/h (3.8 seconds to 60 mph).

The sound is just the beginning though. Exceptionally free winding, the engine imparts the impression it will never run out of power. Hold the pedal down as long as you dare. The Stingray just keeps going faster, and faster, and faster, and yes-even faster. Chevrolet’s product people say the Stingray is good for 322 km/h (200 mph). And you know what? We’ve got no reason to doubt them.

Another plus, this new Corvette handles those extremely high speeds with confidence. Unlike other Corvettes we’ve driven, when you get well into triple digits the Stingray remains perfectly planted on the pavement.

Much of this newfound prowess can be traced to aerodynamics; every surface of the 2014 Corvette Stingray was sculpted with airflow management in mind. The indentation in the roof serves to funnel the air passing over the top of the car to the rear spoiler to increase rear downforce. The vent in the hood reduces lift to maintain steering feel at high speeds, while the vents in the fenders allow excess air to escape from the engine compartment to help the Stingray attain those higher speeds.

A choice of two transmissions is offered. There is an all-new seven-speed manual with a rev-match feature, and a six-speed automatic carried over from the previous generation Corvette. The rev-match feature senses which gate the driver is about to put the shift lever into and elevates engine RPMs to match the gear ratio to ensure a smooth downshift. It’s the same effect a more accomplished driver can get by blipping the throttle with their heel while braking with their toe.

Most remarkably, even with all of its performance potential, this Corvette can readily serve as a daily driver. The Stingray is blessed with the ability to ride gracefully around town without jarring your mandible loose from your skull, while also exhibiting no body roll and extremely tenacious grip in the corners.

What might be the best part of the 2014 Corvette equation is a suggested retail price of $56,645 including freight.

Chevrolet has finally built the Corvette we always knew it was capable of.
©(Copyright Canadian Auto Press)
Car Shopping Tools