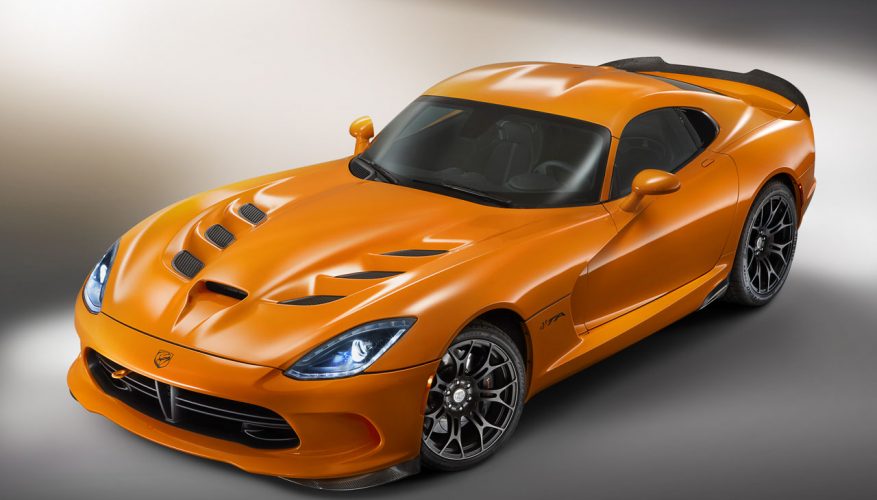 By: Lyndon Conrad Bell
Pity the poor Viper. Even with its greater performance potential, the Viper is all but doomed to be forever thought of as the “other” American sports car. While there’s absolutely no denying the Corvette’s higher profile is what causes most people to envision it when you say “American sports car”, the fact of the matter is Viper and Corvette are also as dissimilar as night and day.

Yes, both are lightweight two-seat sports cars with hugely powerful engines, but the philosophy behind each car is completely different. Corvette is sophisticated in a manner approaching Europe’s finest GT cars, while the 2014 SRT Viper is…

Well, let’s put it this way, if Corvette and Viper were actresses, Corvette would be Sandra Bullock and Viper would be Melissa McCarthy. Both are fun, but they have distinctly different personalities. Which, in turn, leads us to say that we admire the awesome Viper too.

Nothing looks like it; nothing sounds like it, and nothing else goes like it either. Big and brawny, Viper epitomizes the stereotypical brash and crass blue-collar American. In fact, even its engine is a derivative from that of the most American of automobiles-a pickup truck.

Yes, the Viper’s hand built V10 engine is derived from a unit formerly powering Chrysler’s line of medium duty pickup trucks. But don’t let that put you off, in Viper tune this normally aspirated 8.4-litre aluminum V10 delivers 640 horsepower and 600 ft-lbs of torque (up from 600 horsepower and 560 ft-lbs from the previous model). Given the rear drive two seater weighs a mere 1,530 kilos, if you bet absolutely scalding acceleration is most heartily assured you’ll come away a winner.

Power is transmitted to the rear wheels by way of a six-speed manual transmission. The Viper’s 331 km/h (206 mph) top speed is attained in sixth gear right at the V10’s 6,200 rpm redline. As you might imagine, the 2014 SRT Viper is absolutely more about smiles per gallon than miles per gallon. It should come as no surprise to learn that the U.S. EPA estimates a metric-converted 19.6 L/100km in the city, 12.4 on the highway, and 15.7 overall.

Further, even though this iteration of the Viper has had more attention paid to creature comforts than any previous version of the car, if you think you’re going to get into a Viper and be cosseted the way you would in say, a Chrysler 300, you are in for a serious awakening. This car is easily one of the most performance-focused automobiles you can buy today. Yes, interior fit and finish are greatly improved, but the narrow, firm, and deeply bolstered seats have but one purpose; holding you in place while the Viper takes you on the ride of your life.

And frankly, if you aren’t up to the task, the Viper will have you fearing for your life. Acceleration is brutal, the noise of the V10 sounds like the bellowing of the hounds of hell, and the ride quality is so taut you can practically feel the grain pattern of the asphalt in your posterior. Of course, along with this extraordinarily tight ride comes some seriously determined handling. You can positively scream through corners in a Viper. But, you need to be ready to deal with heavy steering, a stiff clutch pedal, and a recalcitrant shifter in day-to-day driving.

The beauty of this is the faster you go, the more those aspects of the car’s nature make sense. You see, because the Viper goes so fast, the controls have to start out heavy to feel right when the car is at its optimal speed. Once the Viper is warmed up and running fast, the shifter feels just right, the steering is both accurate and communicative, the throttle response is dead on, and the braking is absolutely sublime.

However, the Viper’s happy place is so far beyond the skills of the average driver, we highly recommend you avail yourself of the one-day SRT track experience, which Chrysler very wisely includes in the purchase price. An incredibly powerful car with extremely high limits, but when you overstep those limits the Viper gives you very little warning. If you’re all the way out on the ragged edge of its capabilities and lose it, the resulting debris field will be quite spectacular.

In other words, approach this car with a very healthy respect for its performance potential. If you take anything at all away from this review, it should be this: the reports of the newfound sophistication of the fifth generation Viper are somewhat exaggerated. However, the reports of the utter brutality of driving it are exaggerated too. The truth of the matter is the Viper rewards a skilled driver in ways few other sports cars can. But it is equally true that the Viper does not suffer fools gladly. You’d best know what you’re doing before you give a Viper full throttle.
©(Copyright Canadian Auto Press)
Car Shopping Tools