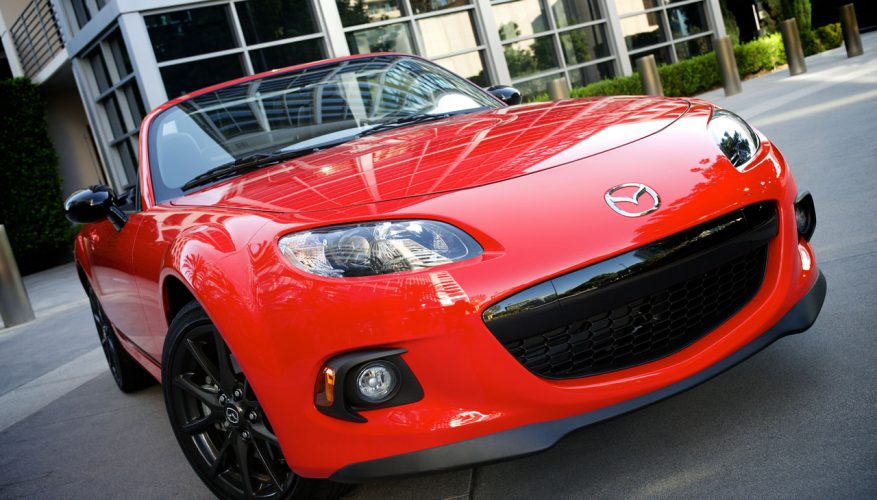 By: Lyndon Conrad Bell
By now, most people familiar with the MX-5 know the initialism PRHT represents power retractable hardtop, making this version of the world’s best selling sports car a two-seat coupe and a roadster.

The power hardtop retracts into its own storage well, so no intrusion upon the MX-5’s admittedly meager trunk space is required. Cargo capacity is constant whether the top is raised or lowered (good thing too, as there are only 150 litres available). Retraction or deployment of the roof can be accomplished in 12 seconds. Releasing a single catch at the header and pressing a button atop the centre stack does this.

Power is the same as with all other versions of the car. This means you’ll find a 167-horsepower 2.0-litre four-cylinder engine with an aluminum block and head, capable of generating 140 ft-lbs of torque happily whirring under the diminutive two-seater’s hood. Transmission choices for directing its thrust to the rear wheels are a six-speed manual or a six-speed automatic with a sport-shift mode in GS and GT models; the base GX makes do with a five-speed manual or the same optional automatic. Fuel economy with the six-speed manual is rated at 9.7 L/100km in the city and 7.1 on the highway. The six-speed automatic returns 10.1 in the city and 7.2 on the highway.

While those power and torque numbers are relatively low in these days of 300-horsepower nearly everything, the Mazda’s weight is kept to a minimum to ensure its sprightly, if not exactly astounding performance potential. The exhaust manifold is crafted from lightweight tubular steel (instead of cast iron) and the intake manifold and cam cover are constructed from even lighter weight composite plastic. You’ll also find aluminum in the hood, trunk lid, control arms, rear suspension uprights, and rear brake calipers. The result of all of this is a curb weight in the area of 1,100 to 1,200 kilos, depending upon the optional equipment fitted to the car.

This, plus the fact the MX-5 offers 50/50 weight distribution when laden with a pair of passengers and a full tank of fuel means it is one terrifically agile automobile. Or, put more plainly, this is a car that loves to corner. Response to steering inputs is immediate. The car takes a set, bites, and motors right on through pretty much any curve you throw it at. There’s a reason so many MX-5 owners participate in autocross events.

Proof positive that an extraordinary suspension setup will trump outright power in every real-world situation, the MX-5 will chase down pretty much any sports car you can name on a winding road given a competent driver at its helm. While the engine isn’t amazingly strong, it is admirably willing. Happy to rev right to (and through) its redline, the MX-5’s powerplant spins so freely you’ll swear it’s Teflon coated.

Accentuating all of this with considerable zeal was the slick-shifting short-throw six-speed manual transmission fitted to my test car. Snicking crisply from one gate to the next, practically guiding your hand from gear to gear, few shifters offer so much satisfaction. And, the sound of the little engine will lead you to believe you’re doing double the speed you actually are; so thrilling is its sound when working hard. And truthfully, that’s the real joy of driving a Mazda MX-5-you really don’t have to engage in death-defying feats of speed to have a good time with the car. You feel everything it does, and everything it does feels really good.

Surprisingly, even out on the highway at speed, the MX-5 still delivers a secure and stable ride. Very resolute in its dynamics, the Mazda happily serves as a touring car too. Still though, as good as it is at this task, the little MX-5 excels as a sports car. If we are to be entirely frank, we’re hard-pressed to name a better sports car value. Yes, a number of cars are faster, many offer more features, and still others have much more significant history behind them.

But, if you’re a driving enthusiast looking for a fun to drive new car at an affordable price, the 2014 Mazda MX-5 is difficult to beat. That price starts at $29,250 plus $1,795 for freight and pre-delivery prep, whereas a PRHT can be had for $36,045 plus freight.
©(Copyright Canadian Auto Press)
Car Shopping Tools