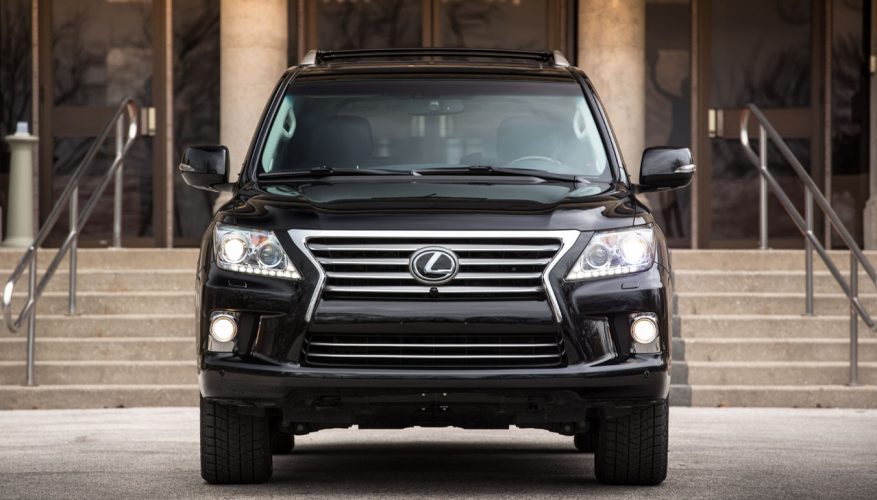 By: Lyndon Conrad Bell
If the phrase “large and in charge” ever applied to any particular automobile, the Lexus LX 570 can definitely wear the T-shirt. Interestingly though, despite its size, the largest Lexus model doesn’t come across as gaudy or ostentatious. While the look of the Lexus does command respect (one glance and you know it’s definitely an expensive ride), the LX 570 doesn’t assault your sensibilities with an overt display of bling-glitz-ity the way something like say, the Cadillac Escalade does. Instead, the size of the LX 570 implies purpose.

Given it’s one of the last of the full-size body-on frame luxury SUVs, the LX 570 can rightfully challenge the best of the best in terms of its capability off-road. Of course, along with all of the robust capability comes considerable weight, and as we all know, weight is detrimental to both performance and fuel economy.

There is no overcoming the fuel economy penalty though. Based on the model’s official ratings, you’re looking at a claimed 17.0 L/100km in the city, 11.6 on the highway, and 14.5 combined. Being that Canadian fuel economy numbers are more fantasy than reality a better estimate is the U.S. EPA that rates the LX 570 at a metric-converted 19.6 city, 13.8 highway, and 16.8 combined. But hey, if you’re shopping for a sub-10 L/100km vehicle in this size category, you’re due for a significant attitude adjustment.

Power is routed to the four drive wheels by way of a six-speed automatic transmission and a Torsen limited-slip locking centre differential. Normally, torque is split 60 percent to the rear wheels and 40 percent to the front, but the Torsen system will also apportion torque from front to rear depending upon available traction.

Given its size and weight, and outstanding stump-pulling capabilities you’d be forgiven for expecting the Lexus to ride like a truck. But no, we’re talking luxury-car smoothness here. After all, this is the flagship Lexus SUV; effortless grace is its birthright. Yeah, the LX 570 is big, and yeah, maneuvering around town will give you moments of concern. But the way it pampers you will perhaps absolve it of those sins.

For $95,450 plus $1,995 in freight and pre-delivery preparation charges the LX 570 comes completely loaded with no available options. Numbered among the standard features are semi-aniline leather, ventilation for the front seats, heat for the second row seats, a heated steering wheel, a console mounted cool box, a Mark Levinson 19-speaker audio reinforcement system, a rear-seat entertainment package featuring a pair of seven-inch video monitors mounted beneath the headrests of the front seats, parking assist, remote engine start, a pre-collision system, smart cruise, and the usual luxury SUV standard menu items such as proximity sensing entry with push button start, a power liftgate, and a sunroof. On-board electronics include a touchscreen video interface monitoring both a rearview camera and the navigation system. The telephone, audio, and navigation systems also respond to voice inputs.

Any vehicle this size is expected to offer a third row of seats and the Lexus does-somewhat begrudgingly. You’ll find it’s very difficult to get back there, and once an adult of any stature does, they’ll be sorry they tried. Headroom and legroom for grown folks ain’t happening. Kids will be OK for the most part, but truthfully the third-row is there because it is expected to be-not because it is useful.

Perhaps proving the third row was an afterthought, it folds away to the sides of the cargo compartment, rather than into the floor. While at first this looks like an innovative solution, this strategy detracts significantly from the LX 570’s potential cargo capacity even though folding them away nets some 1,161 litres of gear toting space. Stowing the second row as well garners a rather significant 2,352 litres. Here’s the thing though; while that number looks very generous (and we freely admit it is), the significantly smaller Lexus RX 350 offers 2,274 litres.

All in all, this is a rather specialized vehicle whose true capabilities are useful to a very specific subset of drivers. Of course, this very factor will likely make it attractive to people who aren’t in that subset. Whatever the case, if you’re looking for exceptional luxury along with outstanding off-road capability and a strong reputation for reliability, and fuel economy isn’t an issue for you, you may well have just found your ride.
©(Copyright Canadian Auto Press)
Car Shopping Tools