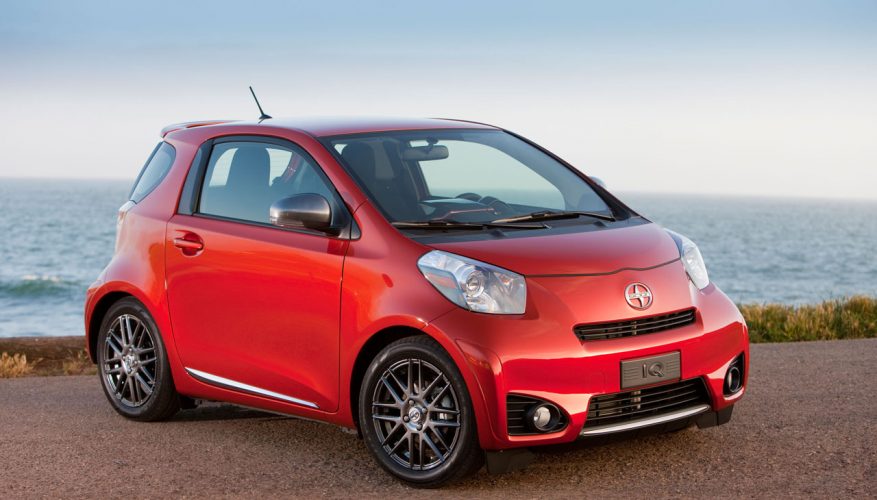 By: Lyndon Conrad Bell
Here’s something to ponder for a moment. The cute little 2014 Scion iQ offers a luxury very few other cars can match. Let’s say you live in a larger city like Montreal, Toronto, or Vancouver; finding someplace to park once your destination is reached can be a challenge. Large cars are at a definite disadvantage in this regard.

But, the diminutive Scion offers the potential for exploiting spaces most cars have to pass right on by, and herein lays one of the model’s primary strengths-convenience. Sized in between the Smart ForTwo and the Mini Cooper, the Scion readily fits into places even the Mini can’t. Further, it’s billed as being capable of seating four people where the Smart car will only accommodate two people-as its name implies.

Of course, anybody accustomed to the significant proportions of the cars typically calling the roads of North America their native habitat will take one look at the Scion and ask; “Is that thing safe?” You best believe we did too. Soothing our minds was the fact the Scion’s airbag count stands at 11, including one for the rear window. Further, modern safety tech such as ABS, electronic brake force distribution, brake assist, traction control, vehicle stability control, smart stop brake override, and tire pressure monitoring are all standard equipment.

Of course, all of that is well and good, assuming the car doesn’t crumple like an aluminum beer can when its structure is compromised. To that end, the Scion’s engineering team endowed the model with an exceptionally strong structure; yet one designed to absorb and dissipate impact forces, rather than transmitting them into the passenger cabin.

In crash tests, the US National Highway Safety Administration awarded the Scion four out of five stars for overall crash protection and three out of five for side impacts. The Insurance Institute for Highway Safety rated the Scion iQ “Good” (which is its top rating) for offset frontal crashes and roof strength. So yes, crashes in the tiny Scion are survivable.

In addition to its robust construction, the iQ is a very cleverly packaged automobile. Its minimal overhangs, forward windscreen location, maximized cabin space, and overall compactness are owed to a number of mechanical innovations. Employing a centre take-off steering gear enabled the iQ’s designers to fit an extremely compact steering rack, which meant the overall width of the car could be significantly reduced. The Scion’s differential was developed specifically for this installation and was designed to consume as little space as possible-while still providing adequate durability. Similarly, the iQ uses an ultra compact heating and air conditioning unit. Further, specifying a special flat fuel tank along with rear-angled shock absorbers meant those necessities would consume less space than conventional designs, thereby offering more space to improve interior volume for passengers and cargo. Inside the car, the asymmetric dashboard and slim seat designs figure highly in its ability to carry four people in such an extremely compact package.

It should be noted however, while the iQ is billed as the world’s smallest four-seat automobile-and it does indeed have four seats-the best you’ll manage for any significant distance is three full-size adults. While despite its deceptively small outward appearance, the Scion will hold four reasonably sized adults-in a pinch-it can much more readily transport three adults over moderate distances.

When it comes to cargo, if you limit yourself to one passenger, you can fold the Scion’s rear seats to get some 481 litres of cargo capacity. But truthfully, this is an urban runabout. Cargo isn’t what this car is all about-it doesn’t even have a glove box. The Scion iQ is a device best employed for transportation between where you sleep and where you work-or go to school.

Another of the Scion’s strong suits is fuel economy. In fact, the electric Scion iQ EV uses no gasoline at all. Offering 80 km of range on a full charge of its 12kWh battery pack, the iQ EV can be fully recharged from depletion in three hours at 240v. The conventional internal combustion engined iQ uses a 1.3-litre four-cylinder with 94 horsepower and 89 ft-lbs of torque. Power is supplied to the front wheels through a continuously variable transmission. Claimed fuel economy is 5.5 L/100km in the city, 4.7 on the highway, and 5.1 combined. While good for comparison purposes, these estimates aren’t as realistic as the US EPA numbers that rate the iQ at 6.5 city, 6.3 highway and 6.3 combined.

Small on the outside, but big on the inside, the Scion drives well around town, though it can be subject to buffeting on the highway at speed, particularly in crosswinds. At its essence the Scion is a Toyota, so reliability should be good, and while 5.9 L/100km would be better, 6.3 is pretty respectable. All in all, if you’re looking for city transportation, the 2014 Scion iQ is a car worthy of further investigation.