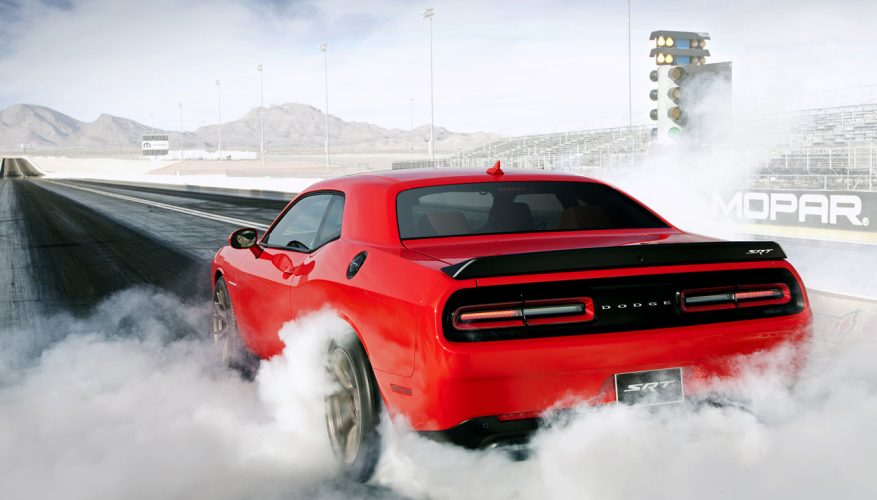 By: Simon Hill
As part of its ambitious five-year product plan, Fiat Chrysler Automobiles recently announced that it intends to steer Dodge in a more performance-oriented direction, which means axing the popular Dodge Grand Caravan minivan and the mid-size Avenger sedan.

Dodge loyalists fretted that this was the beginning of the end for Dodge, but to balance the ledger Dodge has now revealed the 2015 Challenger SRT Hellcat, a new range-topping Challenger model that gives substance to the brand’s performance promise with a 600-plus horsepower supercharged V8.

While the final numbers have yet to be officially established, SRT powertrain director Chris Cowland remarked that the Challenger SRT Hellcat will be "bloody fast," with a minimum of 600 horsepower and something in the order of 575 lb-ft of torque. That makes the car’s 6.2-litre Hemi engine the most powerful V8 ever offered by any of Chrysler’s brands.

The Hellcat shares many of the same basic components with the already aggressive Challenger SRT, including its engine block. But 91 percent of the engine’s content has been revised, with new pistons, con rods and crankshaft, and a screw-type supercharger from IHI.

Cowland says that a supercharger was chosen over a turbocharger because it better suits the character of the car, providing instantaneous response and abundant low-end torque. Helping the motor breathe is a fully active exhaust system, the first such system used on a Chrysler product.

Power will be fed to the road via either a six-speed manual transmission or a beefed-up eight-speed automatic, and the Hellcat will get a new selectable Driver Mode system offering a choice of shock settings, steering assist levels, horsepower, traction control settings and transmission settings for automatic-equipped cars.

Backstopping all that power will be the largest front-brake package yet offered on an SRT vehicle, and the Hellcat will also provide two independent systems to help prevent unauthorized use of the car’s performance potential: The first of these is a valet mode that limits engine power and configures all selectable driving functions to conservative settings. The second is a dual key system, with one key that offers up most of the car’s performance and a second red key that is the only way to access the car’s full performance potential.

Outside, the SRT Hellcat gets subtle styling cues including an aluminum hood with cold air intake scoop and dual air extractors, a unique rear spoiler, a distinctive front fascia with a deep splitter, and quad projector lights with more aggressive brow "chops." At the corners, the Hellcat gets 275-width Pirelli P-Zero high-speed tires.

The Challenger SRT Hellcat is expected to launch with pre-orders starting this summer, although pricing hasn’t yet been announced.