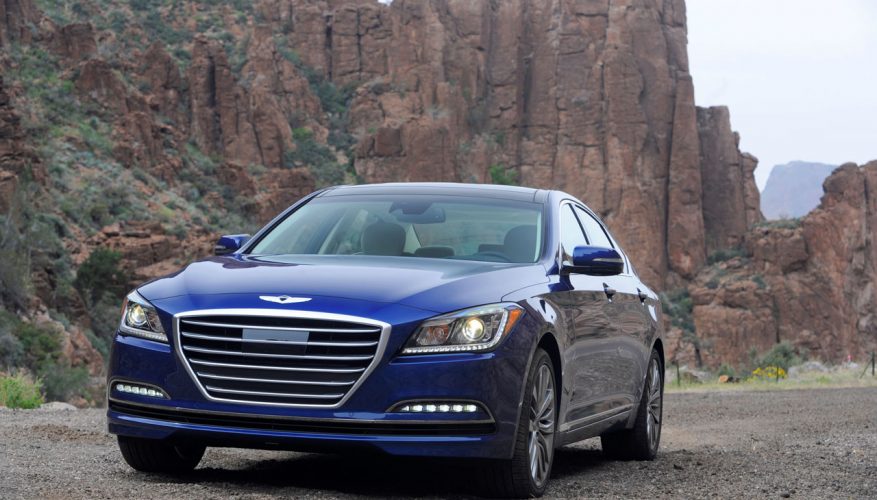 By: Lyndon Conrad Bell
The first book of the Bible is called Genesis. Most people know that. Similarly, the first true Hyundai luxury car was also called Genesis. And no, this wasn’t a coincidence. When Hyundai released that car back in 2008, the company’s management team was well aware of the model’s potential to be the beginning of a whole new story for the company.
And so it came to pass.

In fact, the Genesis was so successful that Hyundai’s executive team was encouraged to go even farther up market. Thus, it can be said Genesis begat Equus, and Equus begat a whole new level of respect for the Korean automaker from all around the auto industry. In other words, just like in the Bible, Hyundai’s Genesis also represented a new beginning.

Now, with the mostly-new 2015 Hyundai Genesis, a new chapter in the story of the value-conscious luxury car begins. If our recent road test of the new car is any indicator, it looks as if Hyundai is going to find itself sitting rather nicely with this new mid-size luxury sedan. We say “mostly-new” because while all the rest of the car is all-new, the engines are carried over from the 2014 Genesis lineup.

Power comes from a choice of two engines. The base powerplant is a 311-horsepower 3.8-litre V6 capable of generating 293 ft-lbs of torque on regular unleaded fuel. Delivering more than adequate power, this will be all the engine most people will require. It winds smoothly, pulls strongly, and is more than capable of propelling the comfortable riding and nicely handling Hyundai well into extralegal velocities.

The optional engine offering is a 5.0-litre V8 capable of delivering 420 horsepower on premium-unleaded fuel and 407 on regular unleaded. Maximum torque output is 383 ft-lbs on premium and 372 ft-lbs on regular. An absolute brute of an engine, the 5.0 makes the 2015 Genesis a highly dynamic automobile, one with rather exceptional capabilities. A true driver’s car, the Genesis 5.0 can hold its own with any performance sedan currently offered.

The quietest and smoothest Hyundai we’ve ever driven, the 2015 Genesis is well in the hunt when it comes to competing with the contemporary set of mid-sized luxury models. Available features include an in-dash eight-inch monitor featuring navigation and a rearview camera, plus hill hold control, power folding outside mirrors, a driver’s knee airbag, and a height-adjustable power-operated passenger seat with power lumbar.
You’ll also find HD radio, a 4.3-inch TFT LCD cluster display, Hyundai’s Blue Link telematics system, SiriusXM Travel Link, a telescoping steering column, one-touch up and down power windows for rear seat passengers, and rain-sensing windshield wipers.

If that looks like a lot of equipment, it’s because it is. This is the most comprehensively outfitted Genesis ever to be fielded by the value-oriented manufacturer.

Fortunately Hyundai paid attention the ergonomic miscues of some of its competitors and made every effort to ensure the features of its newest model were as readily accessible as possible. Logically intuitive, after you take some time to acclimate yourself to the infotainment system’s interface, it becomes second nature.

While we’re on the subject of thoughtful design, Hyundai’s engineering team was very considerate in terms of the placement of storage compartments around the cabin. Further, specific thoughtfulness was applied to the integration of the vast array of mobile devices so essential to our lives these days.

In addition to that bold new grille, the new body design incorporates a longer wheelbase than the outgoing model. Consequently, the 2015 Genesis now offers more legroom. Headroom and shoulder room are more than adequate as well. This new Hyundai Genesis ranks among the most comfortable cars in its class.

It also offers an industry-first convenience feature. By now, we’ve all seen self-opening trunks responding to the waving of a foot beneath the rear bumper. Hyundai’s Genesis goes one step farther. When you stand in front of the trunk with the Hyundai’s key in your pocket or bag for three seconds, the trunk opens after giving you an aural warning it is about to do so.