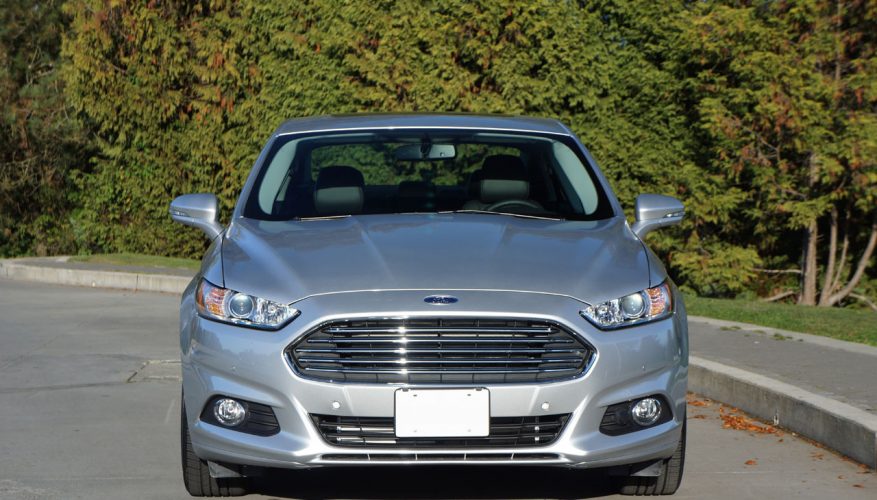 By: Trevor Hofmann
If you think that the new Ford Fusion is only enjoying phenomenal sales success because it’s great looking, a closer look is needed. Its nod to the beautiful Aston Martin Rapide guaranteed it would be one of the most attractive cars in the mid-size class when it arrived in blue-oval dealerships last year, but what new car buyers couldn’t see behind the sheet metal was an upscale interior filled with top-level features, strong performance from a variety of fuel-efficient powertrains, and overall versatility.

No other manufacturer offers as many powertrain options with a single model as Ford does with the 2014 Fusion. No less than six different power units are available, starting with the base 2.5-litre Duratec four-cylinder, which is followed by the 1.5-litre Ecoboost four, the 1.6-litre Ecoboost, the 2.0-litre Ecoboost, the 2.0-litre Atkinson-cycle I-4 in the Fusion Hybrid, and the same engine with a plug in the Fusion Energi. The only mill it’s missing from models past is a V6, dropped in an effort to reduce overall fuel consumption and emissions last year when this all-new version debuted. Depending on the engine and transmission choice, Ford offers auto stop-start to further reduce fuel consumption and emissions, while its time saving and eco-friendly EasyFuel capless refueling system comes standard across the line.

My tester was one of the least efficient models in the Fusion lineup, but after you hear that its direct-injected and turbocharged 2.0-litre Ti-VCT GTDI Ecoboost four-cylinder is rated at a claimed 9.2 L/100km city, 5.9 highway and 7.7 combined, I probably won’t get much sympathy from those driving old V6-powered Fusions despite the $1.50 per litre regular unleaded pump prices I’m forced to pay. The only Fusion model that uses more fuel is the same engine with all-wheel drive, rated at 9.5 city, 6.3 highway and 8.0 combined, whereas the most efficient non-hybrid variant, the 1.6-litre Ecoboost with its standard six-speed manual gearbox gets an estimated rating of 8.0, 5.3 and 6.8. How do the hybrids fare? They’re in another league altogether, the regular Fusion Hybrid getting a claimed 4.0 city, 4.1 highway and 4.1 combined, and the Fusion Energi Plug-in Hybrid receiving an estimated 1.9 L/100km equivalent combined gas and electric and 4.5 L/100km combined gas only. Yes, it appears that Ford doesn’t want you choosing between its Fusion and a competitive midsize model, but rather between which particular Fusion you want to purchase.

They make a strong argument. Once you’ve pulled your eyes away from its sleek four-door coupe shape, unlatch the door and slide on into one of the most comfortable driver’s seats this segment has to offer. My tester was trimmed out in SE gear, which meant sporty ribbed leather upholstery highlighted by off-white stitching for a premium look, while Ford even went so far to cover the Fusion’s dash in a soft pliable plastic, from its upper regions all the way down to the lower console edges, as well as its door uppers front and back. There’s attractive metallic trim around the gauge package, vents, centre stack and along the door, plus nice woodgrain trim that looks fairly real, although feels like the plastic it is. Oh well, can’t win ’em all. The woven roof fabric doesn’t wrap around the pillars like premium branded models either, but the Fusion’s electronics are truly impressive.

From its electronic parking brake to its bright and clear primary gauge package that includes an embedded TFT multi-information display just right of the centre-mounted speedometer, the left side a beautifully detailed display of the tachometer, fuel gauge and various other functions, much of which is controlled by myriad steering wheel-mounted buttons, the Fusion is a step above. Likewise its centre stack gets a large MyFord Touch infotainment system up top, just below a set of vents, while touch sensitive audio and HVAC controls are an elegantly modern way of minimizing clutter. Ford includes touch sensitive seat heating controls within easy reach of either front occupant, and even repeats the process via a redundant set within the infotainment screen.

Slot the switchblade-style remote key fob into the ignition and give it a twist (you’ll need to move up a trim level to get proximity sensing access with pushbutton start/stop) and the feisty little 2.0-litre four springs to life. The engine makes a maximum of 240 horsepower when pumped full of premium fuel or 231 if on a diet of regular, while torque is rated at 270 lb-ft either way, from a very low 3,000 rpm. Acceleration from standstill is brisk and highway-passing power is equally exhilarating, while the six-speed automatic’s shifts are smooth and extremely quick. The transmission has a Sport mode that lets the engine rev higher before shifting, while steering wheel paddles make the entire experience more engaging. Of course you can also use these paddles for short shifting before revs climb to high too, which helps to reduce fuel consumption.

The Fusion’s suspension is fully independent, which is the norm in this class, while its setup is on the firmer European side, albeit not rough at all. This benefits handling, aided by my tester’s Goodyear Eagle LS2 235/45R18 rubber and lightweight 18-inch alloy rims, a great driving and even better looking dark chrome combination. Those comfortable front seats I spoke of earlier proved important when straight turned to curve, where I experienced surprisingly good lateral support.

Rear seat passengers have it pretty good too, especially when it comes to spaciousness. There’s room for three, but the outside positions have a decidedly bucket look to them, making them as laterally supportive as reasonable in this class. There’s a fold-down armrest with dual cupholders at centre, but no ski pass-through behind it. Rather, Ford incorporates 60/40 split-folding rear seatbacks just in case the Fusion’s gigantic 453-litre trunk can’t hold everything you want to bring along for the ride.

When parking the Fusion and getting out, Ford’s Sync connectivity system automatically disconnected my iPhone from hands-free so quickly that I was able to stay on conversation without losing a word, some cars taking over a minute to accomplish the same task. It connects to Sync just as quickly, while pairing a new phone is about as easy as possible.

As mentioned my SE trimmed tester was nicely equipped. Additional standard features with this trim level including a 10-way powered driver’s seat including powered lumbar support, upgraded heated side mirrors with integrated turn signals, satellite radio, Ford’s SecuriCode keyless entry keypad hidden within the gloss black B-pillar, plus more, and that’s on top of all of the standard features that come with the base Fusion S ($21,999 plus $1,550 in freight and pre-delivery prep), such as automatic headlamps, tilt and telescopic steering, steering wheel controls for cruise and audio, the latter connecting through to a four-speaker AM/FM/CD/MP3 stereo with an auxiliary jack. The aforementioned Sync with MyFord Touch voice-activated infotainment is also standard, as is a message centre with trip computer, power windows with one-touch up/down all-round, power door locks with remote access, speed-sensitive intermittent wipers, MyKey, 911 Assist, four-wheel discs with ABS, emergency brake assist, AdvanceTrac with electronic stability control, SOS post-crash alert, a perimeter alarm, the SecuriLock passive anti-theft system, tire pressure monitoring, torque vectoring control, plus all the usual airbags as well as driver and front passenger knee airbags.

My tester included the $3,000 SE Luxury package that added the leather trim I mentioned earlier, as well as the ultra-comfortable 10-way power driver’s seat with three memory settings, four-way power passenger seat with power recline, front seat heaters, a leather-wrapped steering wheel, leather-wrapped shift knob, an auto-dimming rearview mirror and side mirrors, the latter with memory settings, plus fog lamps. My test car also had the SE Tech/My Ford Touch package that adds automatic climate control and a backup camera for $850, a navigation system for a very reasonable $800, a powered moonroof (that includes an integrated garage door opener) for $1,250, Active Park Assist at $600, a reverse sensing system for $400, premium floor mats and a trunk mat at $150, a cargo net in the trunk for $40, and my favourite option on this car, the gorgeous gloss black 18-inch alloy wheels, which was $700 well spent. Including the 2.0-litre GTDI engine’s $1,500 charge the total came to $9,390 in options, which gets added to the SE model’s $24,599 base price for a final tally of $33,889 before adding freight. Not bad at all for a great looking near-luxury mid-size sedan.

You can go for more luxury yet, with items like the proximity sensing remote access with pushbutton ignition system I mentioned before, as well as Active Park Assist (that will park the car for you) with Forward Sensing System, Adaptive Cruise Control with Collision Warning and Brake Support, and new inflatable rear safety belts, while the top-line Titanium model can now be had with cooled front seats, but the price will rise close to Lincoln levels, so you’ll want to pick and choose carefully.

The ability to personalize your Ford Fusion is one of the many reasons this car is so popular, along with its great looks, good driving manners, excellent interior and impressive fuel economy.
©(Copyright Canadian Auto Press)
Car Shopping Tools