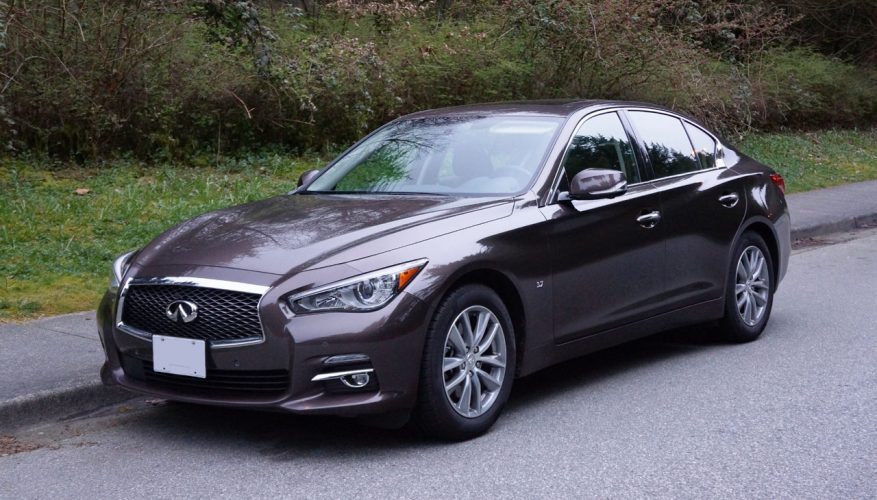 By: Trevor Hofmann
For years Infiniti’s G was the only real sporting alternative to the class benchmark BMW 3 Series, in the way that Lexus’ cars seemed to have been designed to go up against Mercedes-Benz models. While Lexus now offers a credible 3 Series fighter and others have joined the fray, Infiniti has nevertheless earned the right to be the go-to Japanese alternative to Bavaria’s quintessential sport sedan. The only difference today is that there’s no G anymore, but rather a Q50.

The Q50 might boast a new name and revised styling, upgraded interior quality and a mind-blowing list of standard and optional features including a powerful hybrid-electric version, it’s still a G at heart. It remains one of the most energetic cars in its class off the line and on the highway. Its handling capability is astounding. It continues to impress in interior refinement and features. And lastly its styling is arguably better than ever.

I drove the Q50 Hybrid last fall and came away very impressed, while this time around Infiniti gave me a conventionally powered example in AWD Premium trim. This places my tester two notches under top-of-the-line (Hybrid not included), with the base Q50 just below and sportier Q50 S RWD and AWD models just above. Walk past a Q50 AWD Premium parked at the side of the road, or better yet climb inside and you’d never know you’re not getting everything Infiniti has to offer on this car despite its $43,400 retail price (plus $1,995 for freight and pre-delivery prep). Sure the wheels are a couple of inches smaller while a few aerodynamic trim pieces are missing, but the interior quality is identical and standard feature set a very full menu including such niceties as leather upholstery, heated front seats, automatic high beam assist, a brilliant sounding 14-speaker AM/FM/CD/MP3 audio system dubbed Infiniti Studio on Wheels by Bose, plus of course this model features Infiniti’s Intelligent All-Wheel Drive that will divert up to 50 percent of available power to the front wheels when needed, and better yet a full 100-percent to the rear wheels when the road isn’t slippery, which improves at-the-limit handling and fuel economy.

Unusual is a standard V6 that’s more powerful than any of the German competitors’ non-performance-badged (S, M, or AMG) alternatives, with a stimulating 328-horsepower from its 3.7 litres. Torque is plentiful at 269 lb-ft, and the standard seven-speed automatic with driver Adaptive Shift Control (ASC), manual shift mode and Downshift Rev Matching (DRM) makes good use of the engine’s powerband, resulting in thrilling acceleration (zero to 100 km/h in a mere 5.8 seconds) or, otherwise, nice short shifts around town and during leisurely freeway cruises to save fuel.

On that note Infiniti claims 10.6 L/100km city and 6.7 highway for the base Q50, but we all know that they’re governed by Transport Canada’s pathetically useless EnerGuide system that will be updated later this year for 2015 models. For real-world fuel economy figures we need to look south of the 49th to the U.S. EPA system, which when converted to metric are estimated at 11.7 L/100km city and 7.8 highway, still pretty good as far as performance-oriented sport-luxury sedans go. I should mention that my AWD model is rated a little worse, at 11.1 city and 7.3 highway on the Canadian system and 12.3 city and 8.7 highway via the EPA, whereas my personal results were still quite reasonable at 10.7 L/100km.

Infiniti’s 3.7-litre V6 is both its boon and its bane, a boon because it supplies a bucketful of performance for a base model, as stated, but a bane because some competitors are offering decent enough performance for most buyers with much better fuel economy via smaller four-cylinder turbocharged engines (that I must say don’t sound anywhere near as nice as the Q50’s V6). It’s a tradeoff that will come down to your personal requirements and preferences.

Infiniti does offer an Eco mode via the aforementioned Drive Mode selector that will improve fuel economy if you’re willing to dull the car’s senses, although it’s possible the Eco pedal might actually shock your system as it presses back on the throttle when you try to accelerate too quickly, forcibly teaching you to be more conscious of wasting fossil fuels. I found myself switching between this setting and Sport mode, which heightens response times and allows the V6 to rev more freely, ideal for letting the car dance through tight twisting corners at high speed, or just merge quickly from the slow lane (don’t try that in Eco mode).

Speaking of tight twisting sections of tarmac, the Q50 is every bit as exciting to drive as the outgoing G37, and my particular car included what might be the most advanced steering system in the auto industry. Direct Adaptive Steering, which comes as part of the $5,700 Deluxe Touring & Technology package, removes the Q50’s standard rack and pinion vehicle-speed-sensitive power steering and replaces it with a steer-by-wire system that includes no mechanical connection between steering wheel and tires (when working properly). Infiniti has been perfecting this system for 10 years and it shows, as it’s difficult to tell that it’s not a regular steering system that’s been well set up. The difference is that it reacts quicker to driver input, ultimately responding to what you’re doing rather than the other way around. For those uncomfortable with the thought of no direct linkage from steering wheel to wheels there’s a mechanical backup system that will take over if for some reason it fails. It worked flawlessly for me, so much so that I didn’t know it was there until about halfway through my test week when I took the time to read about this car’s assortment of leading edge technologies. After doing so I found out you can set up the steering to react almost any way you want, from razor sharp (dubbed Quick, which is likely Infiniti Red Bull Racing F1 driver Sebastian Vettel’s on-track setting, as it was a bit too exacting for regular driving) to Casual, with Standard in between.

What this package and no Q50 Premium AWD model includes (or the base version) are steering wheel paddles, moving up to the previously mentioned Q50 S trim being the only way you’ll be able to flick the wonderfully shaped solid magnesium devices in a Q50. With this much performance on tap I found this a strange omission, and frankly disappointing. Of course you can tap the gearshift lever forward if you want to row upward through the gears or pull it back to downshift, so there’s still a way to manually connect to the mechanicals, important in such an engaging machine.

That I could only find a single complaint says a lot about the 2014 Infiniti Q50. It’s a fabulous looking, great performing car loaded with top-tier features for superb value, reasons enough for the Q50 becoming as popular as the G was in its day. It certainly deserves your attention.
©(Copyright Canadian Auto Press)
Car Shopping Tools