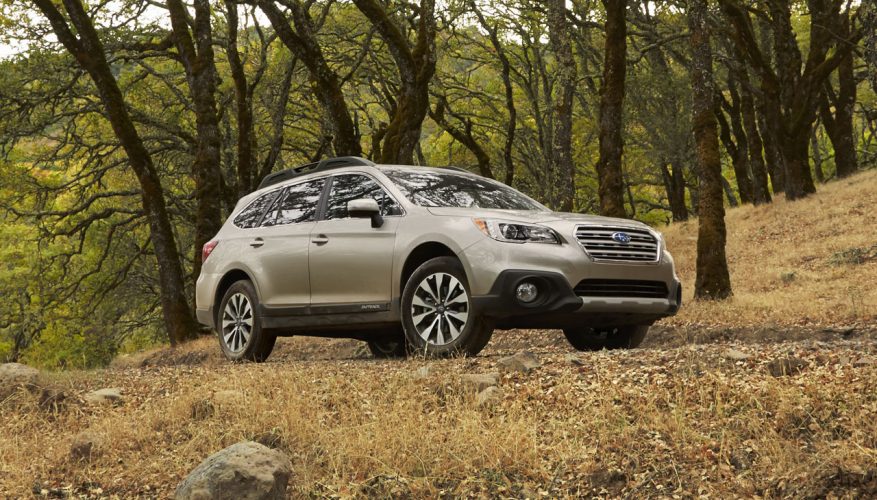 By: Simon Hill
Subaru has always tended to take an evolutionary approach to its designs and the new 2015 Outback, which debuted at the recent New York International Auto Show, is no exception.

As with previous Outbacks, the fifth-generation version is based on the Legacy platform and has been updated in concert with its sedan sibling. The new Legacy (the sixth generation of that car) debuted earlier in the year at the Chicago auto show.

Stylistically, the new Outback has an entirely new front fascia with a hexagonal grille, a more steeply raked windshield and new standard HID headlights. The new car is slightly bigger than the previous Outback, with 15 mm more overall length, 18 mm more width and a 5-mm longer wheelbase. The changes, though small, allow a more spacious cabin with greater shoulder, hip and elbow room up front, and more legroom in the back seat. Ground clearance remains the same at 220 mm.

Mechanically, the latest Outback gets either an enhanced, lighter version of Subaru’s familiar double-overhead-cam 2.5-litre four-cylinder boxer engine, or the company’s equally familiar 3.6-litre six-cylinder boxer engine. In addition to being lighter, the 2.5-litre engine is quieter, more efficient and slightly more powerful, up from 173 to 175 horsepower, and with its 174 lb-ft of torque spread over a broader rev range. The 3.6-litre engine produces 256 hp and 247 lb-ft of peak torque.

New for 2015, both engines are mated to a Lineartronic automatic continuously variable transmission. The 2015 Outback also gets Subaru’s X-Mode all-wheel drive system that enhances dynamics and provides hill descent control. For better efficiency on pavement, there’s a new active grille shutter system that Subaru says works along with the Lineartronic CVT to help improve fuel economy, especially on the highway.

As expected, the new Outback is available with plenty of safety features, including front seat-cushion airbags, a rearview camera, blind spot and rear vehicle detection, and a new version of the EyeSight system with steering-responsive fog lights. With this feature, if the fog lights aren’t already in use they will automatically respond to steering input, lighting up independently when going around corners to cast more light in the direction of the turn.

To keep things comfortable and connected there are new soft-touch materials in the cabin, added padding in the armrests and centre console, and a new upgraded infotainment system with either a 6.2-inch or 7-inch screen.

The new 2015 Outback is expected to arrive at Subaru dealerships in the summer of 2014.