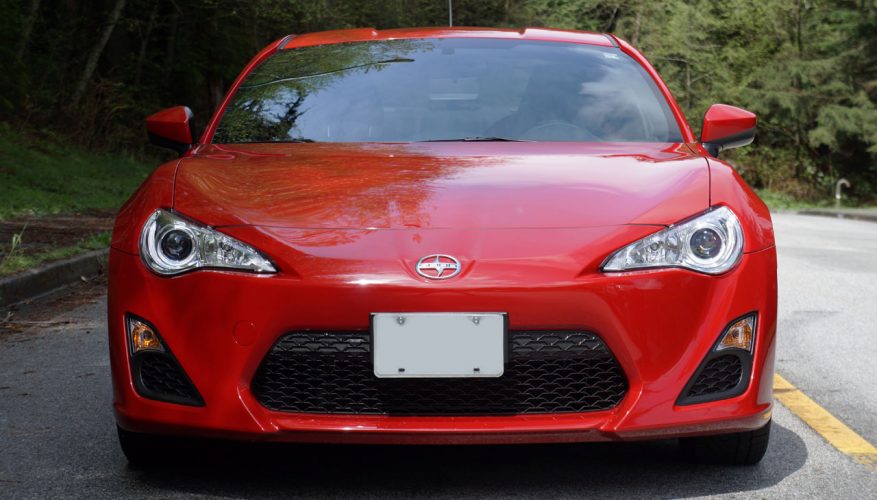 By: Trevor Hofmann
I just stepped out of a $50k+ German premium tuning brand-badged super coupe and was totally impressed, but not as much as I was with this $26,450 Scion FR-S I had the week prior. Certainly the Teutonic two-door was quicker off the line and faster at full throttle in sixth gear, while the exhaust note was throatier, cabin quieter and more refined, feature-set more complete and badge more prestigious, but the FR-S is arguably prettier, the front seats more comfortable with better lateral support, its overall mass lighter, the handling sharper and overall feel more visceral. In the end, I had way more fun in the FR-S! And after all, isn’t that why we buy sports cars?

Somewhere between the old Alfas, MGBs, Spitfires and 240Zs we drove in the ’60s and early ’70s; the Celicas, Corolla GT-Ss (AE86s), GTIs, MR2s and Sciroccos we drove in the mid-to-late ’70s and ’80s; the Corrados, Miatas, Preludes, Talons, 240SXs, and even the RX7s, 300ZXs, Supras and NSXs of the ’90s… and the heavy horsepower-laden performance cars of today, we’ve lost our way. Who said a sports car has to break 350 horsepower to be street worthy? The brilliantly balanced 200-horsepower FR-S returns us to the sensible sports car.

Let me go on record: I love the Scion FR-S! Very, very few cars cause me to rethink my monthly budget for something absolutely frivolous. OK, it’s not as frivolous as a two-seat roadster. The kids can fit into the back seat (just), the rear seatback folds flat to haul much more than you’d expect (four slicks on racing rims fit perfectly), and its excellent (for a sports coupe) claimed fuel economy at 9.6 L/100km city and 6.6 highway with the manual (as tested) makes it ideally suited for commuting back and forth to work, but let’s face it, there are more practical alternatives for a family man with a teenage boy bookended by almost ‘tween and young adult girls. Then again my girlfriend (who I truly must make my wife) totally saw the sense in it after taking her on a thrilling joyride over my favourite haunt of snaking mountainside blacktop.

If you’ve ever had a significant other who giggles with glee the faster you go, marry her (or him). And the beauty of the FR-S is that it lets you drift like Ken Gushi even if you’ve never let the rear wheels of any other car slide out before. OK, you might not be able to pull off perfectly controlled drifts like the pros, but unlike most performance cars (including that aforementioned German premium coupe) the FR-S gets training wheels for the novice drifter. On the lower centre console is a button for turning off the traction and stability control system (as well as turning on the usual Sport and Snow modes when optioned out with the automatic gearbox), hardly unusual in a performance car. This said the FR-S gets a wonderfully unusual mid-stage VSC Sport program that allows a considerable amount of tail-happy fun before reeling in all the excitement, letting those who might feel a little shy about letting the car’s pretty tail wag away in wild abandon do so without worrying about spinning it around and plugging it into a tree (or worse). VSC Sport is the most aggressive driver’s nanny service I’ve ever experienced, and a highly recommended intermediary for those learning the ropes of performance driving. Of course, the system has to be completely turned off for more extreme slides, which the car executes with perfect poise.

In case you’re wondering how a car with only 200 horsepower and 151 lb-ft of 2.0-litre four-cylinder-induced torque can provoke power slides, then you really need to rethink how to drive a performance car. The FR-S needs no more power despite rumours of a turbocharged model in the works. This little mill makes a heady 100 horsepower per litre already, thanks to two sets of twin overhead cams, 16 valves and a 12.5:1 compression ratio via Subaru’s legendary boxer engine, plus a massage by Toyota’s engineering experts who provided the D-4S direct- and port-injection system. Sure there are Camrys with higher output, but a Camry doesn’t weigh a mere 1,250 kilos.

Scion’s parent Toyota, in cooperation with partial-subsidiary Subaru (Toyota Group owns 16.1 percent of Fuji Heavy Industries which in-turn owns Subaru), the former which builds the identical GT86 in non-North American markets and the latter the near identical BRZ, made sure the FR-S was light on its feet from the start. A trunk was chosen instead of a hatch to reduce mass while lowering the centre of gravity, whereas a solid roof was chosen with no available sunroof (a prime example of a car with performance as its sole purpose). In a not-so-unusual yet still critical weight-saving move the hood was formed from aluminum. Lightweight 17-inch alloy rims on 215/45R17 summer performance rubber further reduce weight, their delicately thin 10-spoke design making nice frames for the big standard ventilated discs at all corners.

I have no idea how the engineers made an electric power steering system feel so connected, but it’s a regular rack and pinion setup beyond the electronics so at least they weren’t reinventing the wheel. Likewise the undercarriage is made up of MacPherson struts up front and a double wishbone setup in back, while the car’s perfect balance and stiff structure allowed the performance tuners to work the magic they so obviously achieved.

My tester included the base six-speed manual (thank the heavens above and Toyota Canada’s PR/marketing team), which I would choose over the optional six-speed automatic in a nanosecond of a fractional heartbeat. It’s not that the autobox is bad. Actually it’s quite good, with strong upshifts and rev-matched downshifts that can be managed via steering wheel-mounted paddles, but you’ll be able to extract a lot more of the engine’s output with the manual, not to mention greater control through the corners and everywhere else. Getting an FR-S with an automatic is like paying big bucks for a prize-winning bull and then castrating it. Still, there are many who will want an FR-S for styling first and foremost, and if I’m describing you I can understand not wanting the hassle of shifting gears in city traffic. If so, plunk down an extra $1,180 for the six-speed auto and you’ll still getting an excellent sports car that will bring miles of smiles, not to mention the same limited-slip differential as the manual-equipped car. Getting off the line and then up to 100km/h at the same 7.5-second rate as the manual FR-S won’t be possible though.

Those of us old enough to have experienced some of the classic performance cars on the list above will think a 7.5-second zero to 100km/h sprint is plenty fast. We understand that brute horsepower was never a necessary part of the excitement equation (at least not with most imports). The fabulous little rear-drive Corolla GT-S (AE86) that inspired the FR-S only had 112 horsepower under the hood while torque was a scant 97 lb-ft, and that car, which I first drove in the mid-’80s and loved every minute of it, is now legendary, with many performance schools still using it to teach advanced driving skills. The truth is, most of us simply can’t handle the obscene power automakers are currently throwing at us. They pump up engine output to crazy levels and then layer on electronic driving aids that effectively do the driving for us and therefore take away much of the fun, all the while advertising blistering zero to 100km sprint times and heroic top speeds none of us can ever use legally, and if we use them illegally we lose our lovely rides as well as our right to drive.

It all seems quite silly when an absolutely thrilling sports car can be had for well under $30k; $27,945 including Scion’s $1,495 freight and dealer prep charge. For that you get a very nicely finished 2+2, with a luxury-level soft-touch dash top, padded leatherette door uppers, door lowers and lower console padding (the latter two items new for 2014), all of which is highlighted with red stitching to match the wonderfully supportive black and red bolstered (and red stitched) performance seats I spoke of earlier. The gear knob is leather-wrapped and stitched in red too, as is its boot and the car’s meaty steering wheel, and the latter item’s spokes completely lack any secondary switchgear, a reality that might seem like a negative on some cars yet is a bonafide positive in this purposefully performance-oriented coupe. The audio interface is only an arm’s reach away in the FR-S’s intimate cockpit anyway, so why bother with weighty redundancies.

As with other Scion models, infotainment comes via a double-DIN Pioneer system that’s appropriately aftermarket-looking despite having the SCION name painted front and centre. The standard system, which is new for 2014, is stuffed to the gills with features, from its 6.1-inch colour touchscreen display, Bluetooth hands-free phone and audio streaming, aux and USB ports, and eight speakers including two tweeters, two in the instrument panel, a woofer in each door, and two in the rear quarters. An optional system adds dynamic audio as well as navigation and text-to-speech functionality.

To look at the car from the outside, it seems as if the designers spent much of their time conjuring up the ghost of Saturo Nozaki who penned the much-loved 2000GT that first showed up at the Tokyo Motor Show in 1965 and then won all of our hearts with Sean Connery playing James Bond at the wheel in You Only Live Twice (although that was a specially-built roadster created for the movie… the drop-top, gadget control panel and Sony TV monitor weren’t standard 2000GT fare). Some might think that the FR-S found inspiration from head designer Yoshihiko Matsuo and his assistant designer Akio Yoshida at Nissan, which were responsible for the original Datsun 240Z’s styling, but I’m guessing Toyota’s design team wouldn’t admit to that if asked. Interestingly the sleek Fairlady Z, as it was called in its home market, sprang forth from the relics of an abandoned Yamaha joint venture, the remnants of which the motorcycle company tried to involve Toyota in at a later date. Toyota was already well underway with its 2000GT and chose to continue working on it with Yamaha’s assistance instead of adopting a different design. No matter, as the FR-S pulls as many visual cues from this era of beautiful sports coupes as it does performance elements.

In the end we all benefit from having the perfectly beautiful, brilliantly nimble Scion FR-S in our midst, while some actually get to enjoy the car every day in the metal. I plan on being counted in this latter camp as soon as possible. How about you?
©(Copyright Canadian Auto Press)
Car Shopping Tools