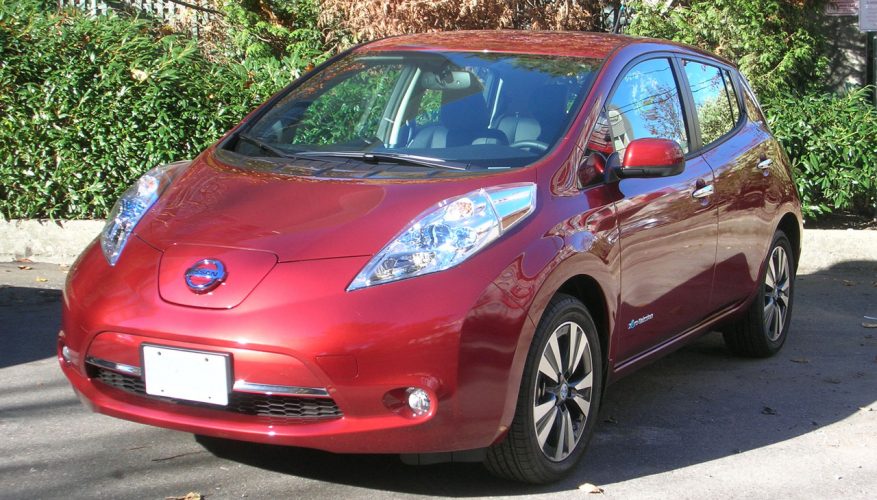 By: Simon Hill
When it comes to cars you can plug in, Nissan’s Leaf has been on a bit of a tear lately. Early this year it surpassed the 100,000 worldwide sales threshold, making it easily the planet’s most popular all-electric car (sorry, Ford Focus Electric and Mitsubishi i-MiEV). Now, after battling the extended-range Chevrolet Volt for North America’s top plug-in spot over the past couple of years, it has pulled ahead to take the overall lead in the first four months of 2014, beating out the Volt, the Tesla Model S, the Toyota Prius PHV and all of Ford’s plug-ins.

You can attribute the Leaf’s growing success to several factors that help it find traction among everyday car buyers: First, while its styling is distinctive and unique, it’s not freakishly so. Unlike the iMiEV’s shouty, pod-like, "I am electric!" design (odd considering its available as a regular gasoline-powered car in other markets), the Leaf has the size, proportions and overall feel of a perfectly normal compact hatchback.

Second, it’s priced realistically for normal middle-class budgets, starting at $33,688 including destination fees. This is admittedly somewhat more than conventional hatchbacks command, but it’s well shy of the Volt’s $38,595 destination-in retail price, and less than half the price of the cheapest Tesla. And keep in mind that some jurisdictions still offer generous incentives, rebates and tax breaks for electric vehicles.

Third, the Leaf is getting good word-of-mouth. Leaf owners would be the first to admit that the car isn’t suitable for everyone – its real sweet-spot is as a second car for families who live near the central city core – but those who fit the ideal owner profile appear to have high praise for their Leafs: The British owner of the 100,000th Leaf bought his on the recommendation of a friend who owned one and who praised it not just for its zero-emissions status and advanced infotainment features, but also for its low running costs. In my own social circle, a sailing friend who lives downtown recently bought a Leaf, and is quick to extoll on its virtues and promote it to friends.

I had the opportunity to try a top-of-the-line 2014 Leaf SL myself for a week, and as someone who lives downtown myself and has a conventionally powered car available in the driveway, I fit the ideal owner profile to a tee. So did I become a convert? Read on …

For 2014 Nissan has given the Leaf a standard RearView Monitor backup camera, and my test car had a new black leather interior trim option, but for the most part the Leaf remains the same car it was when introduced in 2011.

First impressions count, and the Leaf leaves a good first impression. As mentioned, the styling is unique, but not too "out there." The protruding headlights remind me a bit of Nissan’s Juke, and I rather like the curvaceous rear end with its elongated sweeping taillights. Overall, it’s cute, but not too cute.

Inside, the Leaf is really quite nice, certainly in my test car’s SL trim. The interior styling is clean and modern, if perhaps a bit plain, and while much of the interior is built with rigid plastics it all looks good and is well fitted together. Even in base S trim the Leaf is fairly well equipped, with pushbutton start, Bluetooth hands-free connectivity, power locks and windows, a backup camera, automatic temperature control, 12-volt outlet, 60/40 split folding seats, and a four-speaker AM/FM/XM/CD audio system with 4.3-inch colour monitor, auxiliary plug and USB port.

Also standard in the base S trim are heated front and rear seats (upholstered in cloth) and a heated leather-wrapped steering wheel. This is a nod to the fact that it takes less energy to provide direct, focused heat rather than warm the entire cabin, and it’s fair to say that in the winter you can’t expect the kind of heater output from the Leaf that you get from a conventionally powered car. In a nice touch, the rear seat heater controls are placed on the front seatback, where they can be easily reached by both back seat occupants and the driver, so you don’t wind up wasting energy heating the rear seats after back seat passengers exit the vehicle (let’s face it, it’s usually kids in the back, and they never turn off the lights at home let alone seat heaters).

On the road, the Leaf offers enough power from its 80kW (approximately 107-horsepower) electric motor to easily keep up with city traffic, and indeed at low speeds it feels downright potent thanks to the ample torque inherent in electric motors. The handling is competent and predictable, and while overall the Leaf is not exactly exciting to drive it is quite pleasant to drive, and luxuriously quiet and serene. Basically, it’s just like driving almost any decent bread-and-butter hatchback, and my only real complaints are that I found the brakes a bit grabby and non-linear, and the A-pillars a bit obstructive.

During my testing, the Leaf’s 24 kW/h lithium-ion battery provided about 150 km of range on a full charge, although I did note that if I turned the heat on I immediately lost about 10 km of range. Still, that’s a lot of range for running errands and most commuting needs. Charging is easily accomplished by plugging the car into a standard 120-volt outlet. This can take up to about 20 hours if the battery is almost empty, but I never drained the battery more than about halfway during my driving, so the car always managed to fully recharge its battery overnight.

For long-term ownership you can have a special 240-volt charging station installed at your residence and/or work, reducing charging time to about four hours. As well, there are public 240-volt charging stations in many large cities, and the Leaf can tell you where these are located, and what your cruising range is with the current charge. My Leaf-owning sailor friend took her car on an almost two-hour highway road trip to a nearby mountain town and was able to top up the car with enough juice for the return trip with a quick 15 minute charge using a free 240-volt charger.

To help you eke the most distance out of your available charge there’s an Eco mode (mostly this appears to dull the throttle response, but I understand it also optimizes things such as the climate control system), and to help encourage thrifty driving there’s a "green driving" evergreen tree icon that grows branches when you accelerate and brake economically, adding additional trees the longer you keep at it. The initial tree actually starts out looking like an anvil or antenna or something, but it makes more sense once it grows past two-thirds height.

The CarWings app lets you communicate with and control your Leaf using a smartphone. You can check the current charge state, turn on the climate control to pre-condition the cabin environment, and various other functions. I never really had the need to check the charge state because the car was always plugged in while I was at home, and it was usually better than half charged, as I never had far to go. I tried the climate control pre-conditioning feature and it was nice, on a chilly day, to step into a warm car with a warm steering wheel.

In terms of running costs, it can be a tricky to figure out the price of living with an electric car, since electricity rates can vary by total amount used and by time of day, and there’s no easy way to measure point-of-consumption costs like we can when a gas pump is involved, so you typically need to figure out how much of your total monthly electricity bill is car-related charging costs. Then there are all those free public charging stations: with judicious use of available charging stations, my Leaf-owning friend managed to rack up 1,000 km while spending only an estimated $3 on electricity.

In my own experience, with my test car showing a long-term average of 5.9 km per kW/h and my average electricity cost working out to about 8 cents per kW/h, that means it was costing me 8 cents to travel 5.9 km, which is 1.36 cents per km, or $1.36/100km. By comparison, with gas costing $1.36 per litre (and it currently costs more than that where I live) I’d need to get 1L/100km to achieve the same economy in a gasoline-powered car. And that’s not counting oil changes, which the Leaf doesn’t need.

In the end, I found that the more I drove the Leaf, the more I liked it. I do have the advantage of living on the West Coast where the climate is comparatively mild, but given the ability to pre-heat the car while still plugged in, even those city-dwellers living in colder climates shouldn’t have trouble keeping things comfortable.

As for range, if you’re the type of driver who gets anxious when your conventionally powered car gets to about a third of a tank of gas, then maybe the Leaf isn’t for you. But if you’re the type of driver for whom a third of a tank seems like plenty for the day, the Leaf could be very practical and appealing. It’s a car that gives you a different perspective on things, and you find yourself driving past gas stations thinking "what a strange anachronism, and such a bizarre waste of space!" So yes, I guess that makes me a convert.