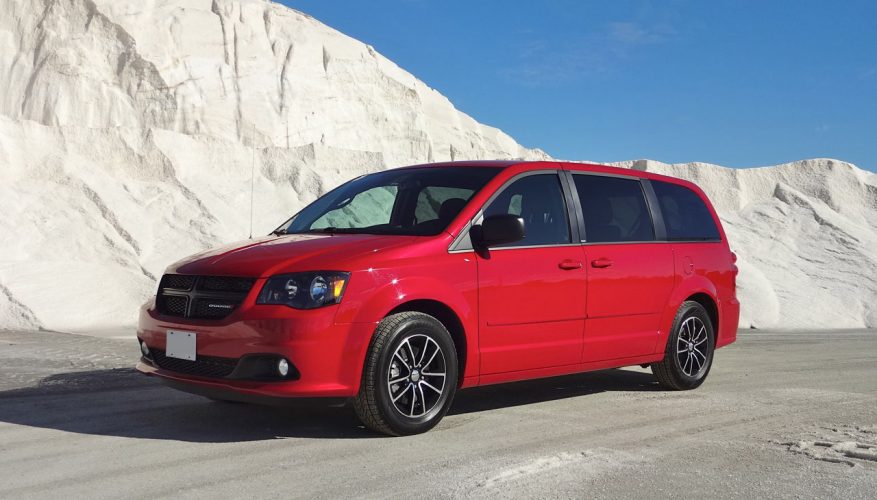 By: Simon Hill
While the past decade or so has seen auto manufacturers tripping over each other in the rush to replace their minivans with crossovers of various stripes, Dodge and Chrysler have remained the sole domestic minivan holdouts with the Grand Caravan and Town & Country siblings.

And while it’s true that minivans don’t garner a whole lot of love from the majority of the car-buying public, they remain surprisingly popular with those who need or appreciate the family-friendly space and practicality that only a minivan can truly offer. Indeed, with few rivals to offer real competition, the Dodge Caravan has become a bit of a sales phenomenon: During the first quarter of 2014 it didn’t merely outsell every other minivan in Canada by a huge margin, but outsold every crossover and SUV out there as well, not to mention all but one of the top selling cars, sneaking in behind the Honda Civic (12,407 cars sold) with 11,130 vans sold.

With a sales record like that to defend and a current design dating back to the 2008 model year (and last facelift in 2011), it doesn’t take a degree in marketing to guess that a new Grand Caravan – or at least, a new Fiat-Chrysler minivan by some name – must certainly be due to appear in the not-too-distant future. Fiat-Chrysler CEO Sergio Marchionne confirmed this at the 2014 Detroit auto show, saying that the design for the next-gen van is “95 percent complete,” but he tempered the news by saying that the new van would be available in … 24 to 30 months. That’s two, nearly three years away, which means that it’ll likely appear in late 2016 as a 2017 model. So if you’re looking for a minivan, you won’t want to be waiting around for anything new to spring out from Fiat-Chrysler in a big hurry.

That’s okay, however, because the current Grand Caravan is immensely popular for good reason: It has been honed to the point that it really is about as practical as it’s possible to get, and if you go easy on the options and negotiate your price knowing that there are usually incentives available on the table, you can get a decently equipped Grand Caravan for a genuinely impressive price.

My test van had all of these options and packages, bumping its stickered price up an eye-popping $13,790 over the base MSRP. At this juncture, it’s fair to point out that things get a little complicated, because $4,200 worth of those options – the "Customer Preferred Package 29G" package – actually represent the step from SXT to SXT Plus trim. So SXT Plus isn’t really a trim level so much as a package on top of the SXT, adding SXT badging, two-row "Stow ‘N Go" seating with flip-over tailgate seats and folding second-row captains chairs, easy clean floor mats, a floor console with cupholder, integrated roof rail crossbars, sunscreen glass, and 17-inch alloy wheels.

I found things further complicated by the fact that when I tried to recreate my test van using Dodge’s retail website’s build and price feature, the Blacktop package wasn’t yet listed in the available options (I was told it would be added soon). Adding even more complexity is the fact that the pricing shown on the website is inclusive of currently available discounts and incentives, while the stickered price is not. Ultimately this is good news I guess, because it means that while my test van carried an all-up MSRP of $43,480 including destination, you should be able to get an identical van for significantly less: even without the Blacktop package showing on the website I was able to add a few stand-alone options to create a nearly identical van (less the fog lights and unique blackout details) for $35,780 including destination, and an SXT Plus Blacktop edition should come in very close to this at the currently advertised website prices. Fortunately once you get past the pricing confusion and packaging complexity, the Grand Caravan itself is simple, practical, and extremely versatile.

Providing dependable performance is a 3.6-litre Pentastar V6 that cranks out 283 horsepower and 260 lb-ft of twist. Hooked up to a standard equipment six-speed automatic transmission it’ll light up the front tires off the line if you really mash the gas, and haul the van to 100 km/h in a little less than nine seconds. If you’ve got a trailer, the Grand Caravan beats out its rivals with a 1,633-kg (3,600-pound) towing capacity.

On the downside, I found the drivetrain a little prone to lurching and jerking on shifts. There’s an Eco mode that forces the transmission to upshift early and keep revs low for improved fuel economy, which means it also downshifts more frequently when you need to accelerate, exacerbating the drivetrain’s lurchiness. Therefore, I didn’t bother much with the Eco mode, which meant I never got anywhere close to the Caravan’s official city/highway fuel economy ratings of 12.2 / 7.9 L/100km, instead getting well north of 15 L/100km in mostly city driving.

Steering and braking are about what you’d expect for a biggish, tallish vehicle, which is to say they make the van turn and stop just fine, but tend to leave you isolated from the proceedings. The suspension does an admirable job of absorbing life’s potholes and keeping things comfy, but it does have a slightly rubbery feel to it. Overall, Honda’s Odyssey and Toyota’s Sienna do a better job in the driving dynamics department, but you’ll pay handsomely for the privilege, and when it boils down to it the Grand Caravan drives just fine, thank you very much.

Inside, especially with the foldaway second-row seats and the Blacktop package’s super console, the Grand Caravan offers all the storage space and versatility you could possibly desire. Open the doors and you quickly understand why this van is so popular: it’s nicely fitted out and there really is a place for everything.

My wife was positively astounded by the disappearing act the seats were able to pull (it takes about 30 seconds to convert the van from a 7-passenger conveyance to a completely flat-floored cargo van), and she loved the hidden floor bins that are available when the seats are in position. I’ve commented in the past that the foldaway second-row seats are less comfortable than true captains seats, being a bit narrow in the backrest, but my six-foot teenage son had nothing but praise for them (mind you, I’m not sure he’s yet cracked 145 pounds). None of us rode in the third row, but I crawled back there to check it out and found it reasonably comfortable – certainly leagues ahead of your typical three-row crossover. What’s especially nice is how the rearmost seats can flip around to provide tailgate sitting when desired. Cargo space ranges from a minimum of 934 litres with all seats in place, up to a maximum of 4,049 cavernous litres with all seats folded.

Up front I found there was actually a bit too much space, in that while the seat-mounted inner armrests are great, the door-mounted outer armrests are too far out to comfortably use while still keeping your hand on the steering wheel. I also found the twist-operated wiper control Dodge mounts at the end of the turn signal lever to be a bit inconvenient in the ever-changing drizzle we get here on the West Coast, as it requires you to lift your hand from the wheel in order to control the wipers. A dedicated stalk is far easier to deal with. And while I’m venting my pet peeves, the little rectangular knockout on the dash next to the gear lever was woefully inelegant. I realize that it’s necessary to provide access to the gear lever’s locking mechanism in case of emergencies, but I don’t understand why Dodge couldn’t conceal it better by putting it in the shifter surround or something.

Those nitpicks aside, I was comfortable and happy enough driving the Grand Caravan. The Blacktop package gives the van a little bit of street cred, a slightly macho, highway patrol look that suited my sensibilities. The lack of automatic climate control or seat heaters means you won’t likely mistake the Grand Caravan for a luxury vehicle (perhaps if you spring for the Crew Plus or R/T, which get leather upholstery and seat heaters), but the standard cloth-upholstered seats are nicely supportive and the steering column tilts and telescopes to allow you to get settled just so.

The upgraded touchscreen navigation audio system looks a bit aftermarket but it works fine and sounds good, with satellite radio, USB input and Bluetooth hands-free connectivity all accounted for. The navigation display even features a little colour-keyed van to show your current position. My test van’s rear DVD system will set you back $1,925 but it’ll buy you hours of blissful quiet on road trips, and it comes with a backup camera and 115-volt power outlet. Similarly the power sliding doors and tailgate are another $1,500 but they mean never having to get out and re-close a half-shut door.

In the end, however, you don’t need any of these relatively expensive options to get the incredible flexibility, practicality and family-friendly transportation that a minivan offers. Opt for the base Canada Value Package and the Dodge Grand Caravan comes in some 30 percent cheaper than its Japanese rivals, with a currently advertised price of $21,590 including destination fees, compared to $31,810 including destination for a base Honda Odyssey or $30,810 for a base Toyota Sienna. Right there is a large part of the reason the Grand Caravan is so popular, but for those who want a little more equipment – or a lot more – the Grand Caravan offers options aplenty, and the new-for-2014 Blacktop package provides a little extra individuality to help this van stand out from the crowd.