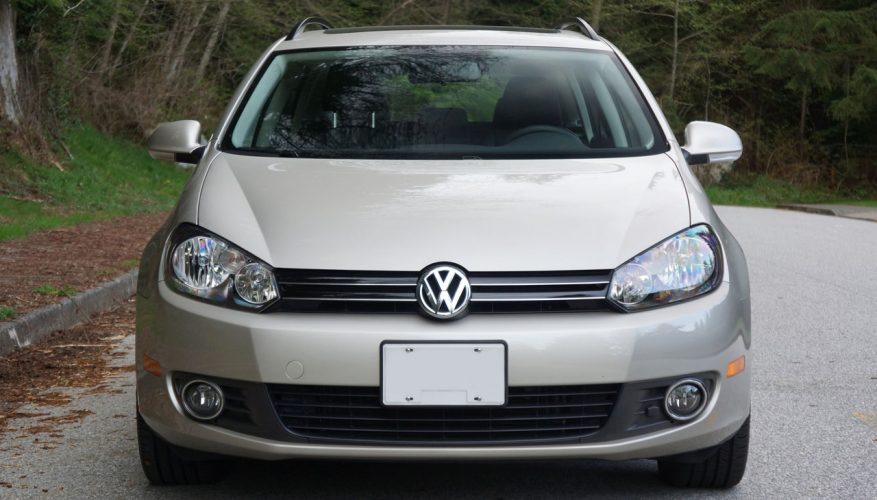 By: Trevor Hofmann
There’s something very special about discreteness. Certainly you can announce your arrival with sporty styling, a loud colour and even louder exhaust note, but life just might go a whole lot smoother if you hardly make a sound as your metallic beige Jetta Wagon TDI rolls up to your destination. Instead of bold, brash machismo, it says intelligent independent thinking. A person who is comfortable with who they are and isn’t trying to attract attention. I suppose that’s what I love best about this car. Well, that, its fabulous fuel economy and massive cargo hold.

My girlfriend and I were choosing between two vehicles while the 2014 Jetta Wagon TDI was in the family fleet, the “little” VeeDub and the brand new Jeep Cherokee crossover SUV. We both really like the Cherokee, especially its premium-level luxury and extensive features in top-line Limited 4×4 trim, but we had a job to do requiring as much cargo space as possible. I asked her which one we should take, and she immediately thought the taller, larger looking Cherokee would hold more when the rear seats were folded flat. I’ve had previous experience with the Golf Wagon so I remained optimistic it would be the winner, but when gathered around the laptop we let the specifications speak for themselves. With the second-row 60/40-split seatbacks folded flat the elongated Golf not only beat the Cherokee for stowage, it walloped it with a left uppercut and laid it out on the canvas… TKO! Compared to the Jeep’s 1,554 litres (54.9 cu-ft) of total rear cargo volume the VW can manage 1,897 litres (67.0 cu-ft), and the Golf Wagon is larger behind the third row too, at 929 litres (32.8 cu-ft) compared to the Cherokee’s 841 litres (29.7 cu-ft). While both can manage the same 452-kilo (1,000-lb) maximum payload, the Golf includes nice chrome tie-down hooks to strap in loose cargo plus a couple of nifty storage compartments under the load floor for hiding valuables. Additionally, the load floor folds into a handy cargo divider with two placement settings.

Don’t worry. This isn’t going to be a Golf Wagon vs. Cherokee comparo, as the two vehicles won’t likely be cross-shopped. Still, I often ask people who say they want a compact SUV if they’ve ever thought of owning a compact wagon instead. Granted, there aren’t many to choose from in the mainstream sector, but unless you regularly go places you need two and a half inches of extra ground clearance for, something like the Golf Wagon makes a lot more sense than the aforementioned Cherokee or Volkswagen’s own Tiguan. The lower riding Golf Wagon handles better than most SUVs, while it goes quicker and uses less fuel than a comparable model powered by the same mechanicals because it’s lighter and only drives the front wheels. The Golf Wagon’s cargo advantage has already been clearly pointed out (it’s a lot more commodious than VW’s own Tiguan too).

The big surprise with the conservatively penned car is that in many ways it’s one of the nicest Volkswagens in the entire range. Touareg aside, no other VW sold in North America offers as nice an interior as the Golf. Truly, the interior is so good it could easily have been pulled out of a premium branded car… well, maybe not an Audi. Volkswagen delights Golf buyers with a full soft-touch dash top that wraps midway down the instrument panel, soft door uppers front and rear, plus cloth-wrapped pillars front to back. Likewise the seats are extremely comfortable and supportive in all the right places, my girlfriend also giving the nod to the VW over the Jeep for comfort, although if you look at the specs they’re not exactly the most advanced buckets out there. They’re mostly manually adjustable after all (the driver getting powered recline), but then again they can be configured eight ways including lumbar, while three-way heated cushions range from tepid to scalding.

Those seats are part of top-level Highline trim, which also means that they’re upholstered in leather to go along with the three-spoke leather-wrapped multifunction steering wheel, leather-wrapped shift knob and leather-wrapped handbrake lever. Ahead of the driver is a traditional white on black dial gauge package with a matching black and white LCD multi-information screen at centre displaying useful details like trip time, trip distance, average speed, average fuel consumption, current fuel consumption and distance to empty, while the centre stack includes a larger 6.5-inch full-colour touchscreen infotainment system making easy access to Volkswagen’s 10-speaker Premium 8 audio system that incorporates a six-disc CD changer, AM/FM radio, SD card and auxiliary inputs, satellite radio, voice activated Bluetooth hands-free phone connectivity, and, under the armrest, a Media Device Interface (MDI) with iPod connectivity. My tester had the optional navigation system that nixes five of the CD slots, but replaces them with a 30-gig hard drive, reasonably priced at $890.

If you factor in its premium-level finishing the 2014 Golf Wagon TDI Highline is also reasonably priced at its base of $31,785, plus one of the lowest freight and pre-delivery prep charges in the industry at $1,395. And I haven’t even mentioned the fabulous full-length panoramic sunroof with powered tilt and slide that comes as part of Highline trim, or its convenient Climatronic dual-zone electronic climate control, variable intermittent wipers and heatable washer nozzles, intermittent rear wiper, tilt and telescopic steering, powered one-touch up/down windows all-round, cruise control, LED turn signals integrated into its powered and heated side mirrors, anti-theft system, fog lamps, and 17-inch alloy rims wrapped in 225/45R17 all-season rubber. There are little premium touches too, such as turn signals that only need to be tapped to flash three times for lane changes, and a high-quality knitted fabric roofliner.

Strangely missing on the Golf Wagon Highline model is Volkswagen’s proximity sensing keyless entry with pushbutton ignition that comes with the Jetta Highline, and both models are devoid of auto on-off headlights let alone fully automatic headlights that other manufacturers offer on top-tier models. I mentioned the LCD multi-information display before, and while it’s fully functional it’s not a colour TFT display like rival manufacturers offer, while other premium-level features that are showing up in mainstream compacts are also not offered, such as an auto-dimming rearview mirror, a reverse camera, heated steering wheel, ventilated driver’s seat, rear seat heaters, universal remote, and side blind-spot monitoring. Rather, the Golf Wagon offers all the usual airbags along with active safety features such as Hill Hold Assist, Electronic Stability Control (ESC), Electronic Differential Lock (EDL), Anti-Slip Regulation (ASR), Engine Braking Assist (EBA), Hydraulic Brake Assistant (HBA), and Electronic Brake-pressure Distribution (EBD) for its four-wheel discs with ABS.

Along with its aforementioned cargo hauling practicality the Golf Wagon TDI is a penny-pincher’s dream when it comes time to fill up. With the standard six-speed manual the clean diesel-powered Golf Wagon is Transport Canada rated at 6.7 L/100km in the city and 4.6 on the highway, whereas the six-speed DSG dual-clutch automatic I tested gets a 7.0 city and 4.9 highway claimed rating.

The automatic gets Tiptronic manual mode for a more engaging driving experience when enjoying curving roads, something this Highline model does especially well thanks to those 17-inch standard alloys I listed off earlier. Of course, the car’s standard fully independent suspension with MacPherson struts and a stabilizer bar up front plus a four-link setup with a stabilizer bar in the rear has even more to do with its high-speed maneuverability, delivering good stability over bumpy surfaces mid-turn and decent comfort levels over rougher roads for a compact model. Likewise its electromechanical power-assisted rack and pinion steering has good feel for such a practical conveyance, but then again with the kind of power under the hood there’s a reason to want to make sure it goes where it’s pointed.

I suppose power isn’t the right word to describe the TDI’s attributes, maximum horsepower rated at a mere 140 in a compact world that’s boasting much higher numbers in top-line trims, but it’s torque that moves a car off the line quickly. The turbocharged and direct-injected 2.0-litre diesel makes an abundance of twist at 236 lb-ft from a low 1,750-rpm, which means the Golf Wagon TDI not only gets up and goes, but it really slingshots from standstill. This is an engine that’s not only brilliantly efficient and effectively cleaner than most of its gasoline-powered counterparts, but its great fun to drive. Stand on the throttle while driving up a steep highway grade and the TDI just gets down to business, delivering speed aplenty no matter how many people are on board or how heavy the cargo in behind.

From the energetic powertrain and agile suspension to the interior quality and commodious accommodations, there’s a lot to love about the 2014 Volkswagen Golf Wagon TDI. It’s a car I enjoy living with each time I test it, and one of few vehicles on the market I’d actually consider owning. Sure the Highline model is missing a number of features expected in top-level trims, but that somehow seems ok in this car too. Like I said in the beginning, the Golf Wagon is discrete. There’s nothing at all flashy about it. And that’s how I like to arrive.
©(Copyright Canadian Auto Press)
Car Shopping Tools