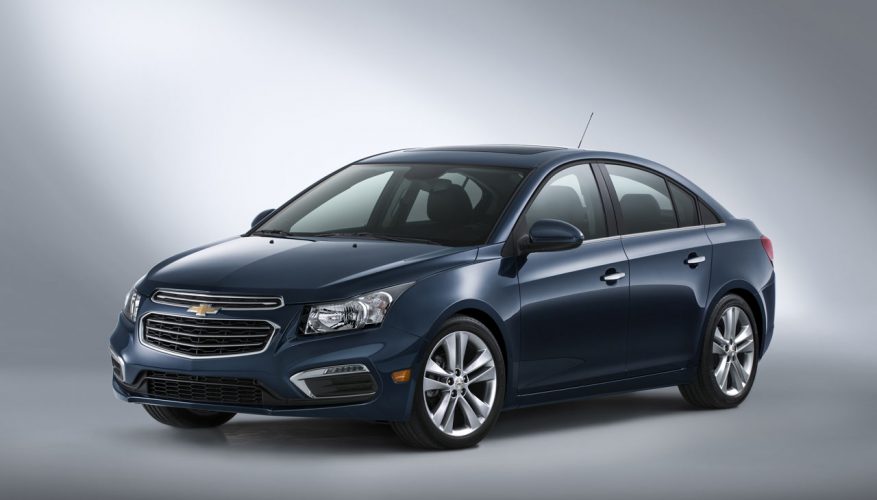 By: Trevor Hofmann
General Motors hasn’t done everything right in its phoenix-like rise from the ashes, but the Chevrolet Cruze compact sedan is one of them. The automaker has sold more than 2.5 million worldwide since the car was launched in 2010, and now it’s time for an update.

The Cruze’s mid-cycle refresh is one of those “if you own one you might notice it but no one else will” overhauls, the face of LS, LT, RS and LTZ models getting a mildly revised augmentation that includes a newly angled version of Chevy’s bisected grille with the Chevy bowtie still planted dead centre on its body-colour strikethrough, similarly fashioned to the recently updated mid-size Malibu, while a new lower fascia with chrome-trimmed fog lamps (in top trims) sits just below. Additionally, LT and LTZ trims get LED running lights positioned below the headlamps for an upscale look, although so many new vehicles tack LEDs onto their headlight clusters they’re starting to become too commonplace to be special. The Cruze’s rear end gets an even subtler redo, with its revised bumper the only noticeable change.

Inside, minor modifications to the 2015 Cruze’s design include revised button placement, the door lock rocker switches moved from the centre console to the door panels and the trunk release button also to the centre console, while the cupholders have been revised so that they’re now “easier to insert and remove cups,” said Chevrolet in a press release.

The seven-inch touchscreen infotainment system should be considered the big 2015 Cruze news, as it now manages text messages from your smartphone via Bluetooth, while iPhone iOS 6 and 7 users can utilize Siri Eyes Free voice controls. Additionally, a 4G LTE connection from OnStar makes the new Cruze a rolling Wi-Fi hotspot. Lastly, more USB ports get added to the system for greater device connectivity. Later this year, Chevrolet will launch an update to its AppShop service that will let you download additional features directly.

“We’ve simply made a great, versatile car even better,” said Steve Majoros, Chevrolet director of passenger car and crossover marketing. “Chevrolet continues to design, build and sell the most compelling small cars in its history and the 2015 Cruze offers more of the features, connectivity and efficiency that are important to today’s customers.”

The 2015 Cruze likely won’t grab headlines like the original did four years ago, but these small changes should keep it fresh enough for those buying into the compact sedan crowd as its interior remains more refined than many of its peers and its mechanicals more advanced.

To the latter point’s end, the Cruze Eco gets a U.S. EPA highway rating of 42 mpg, which is the metric-equivalent of 5.6 L/100km, and the new Cruze Diesel manages an EPA-rated 46 mpg highway, equal to 5.1 L/100km. The automaker’s U.S. division claims the diesel to be the “most efficient non-hybrid passenger car in America,” saying it’s 10 percent more efficient than the only other diesel-powered compact sedan, the Volkswagen Jetta TDI. Chevy also claims greater output with 151 horsepower compared to the VW’s 140 hp, and more torque at 264 lb-ft compared to 236 for the Jetta TDI. Numbers such as these could give the Cruze Diesel a cult following like Volkswagen’s various TDI models enjoy.

Additional features such as 10 standard airbags, including knee airbags for the driver and front passenger, plus optional side blind zone alert, rear cross traffic alert, rear park assist and rearview camera make the Cruze a safe bet in the small car class.

"Cruze remains a strong entry in the compact segment, with features that continue to bring new customers to Chevrolet," added Majoros. "Along with Spark, Spark EV, Sonic and Volt, Chevy’s lineup of efficient, technologically advanced small cars is one of the industry’s most compelling."

Now all Chevy needs to do is build on the Cruze’s popularity by offering varying body styles as it does in other markets. While sedans are popular in the U.S., hatchbacks and wagons are also very popular in Canada. Certainly Chevy offers the compact Sonic to hatchback buyers, but a larger Cruze hatchback or even better, a Cruze Diesel wagon to do battle against the VW Golf Wagon TDI could prove popular. Only time will tell if GM takes advantage of this opportunity to continue increasing its market share amongst important small car buyers.
©(Copyright Canadian Auto Press)
Car Shopping Tools